Energetic, spontaneous, colourful and bold are adjectives that succinctly define Carmel Bonello’s art. His output is expressionistic, exploring the world around him in full colour and bloom. His typical black contours, as in the expressionist work of Georges Rouault, Bernard Buffet, Oskar Kokoschka and Egon Schiele, contain the chromatic vigour of the Maltese artist’s palette.

He thus emphasises the mass, energy and volume of the subject represented. This could be the humours and moods of a Maltese landscape, the emotions etching a human face, the sensual voluptuousness of a female body or the entirely non-representational. 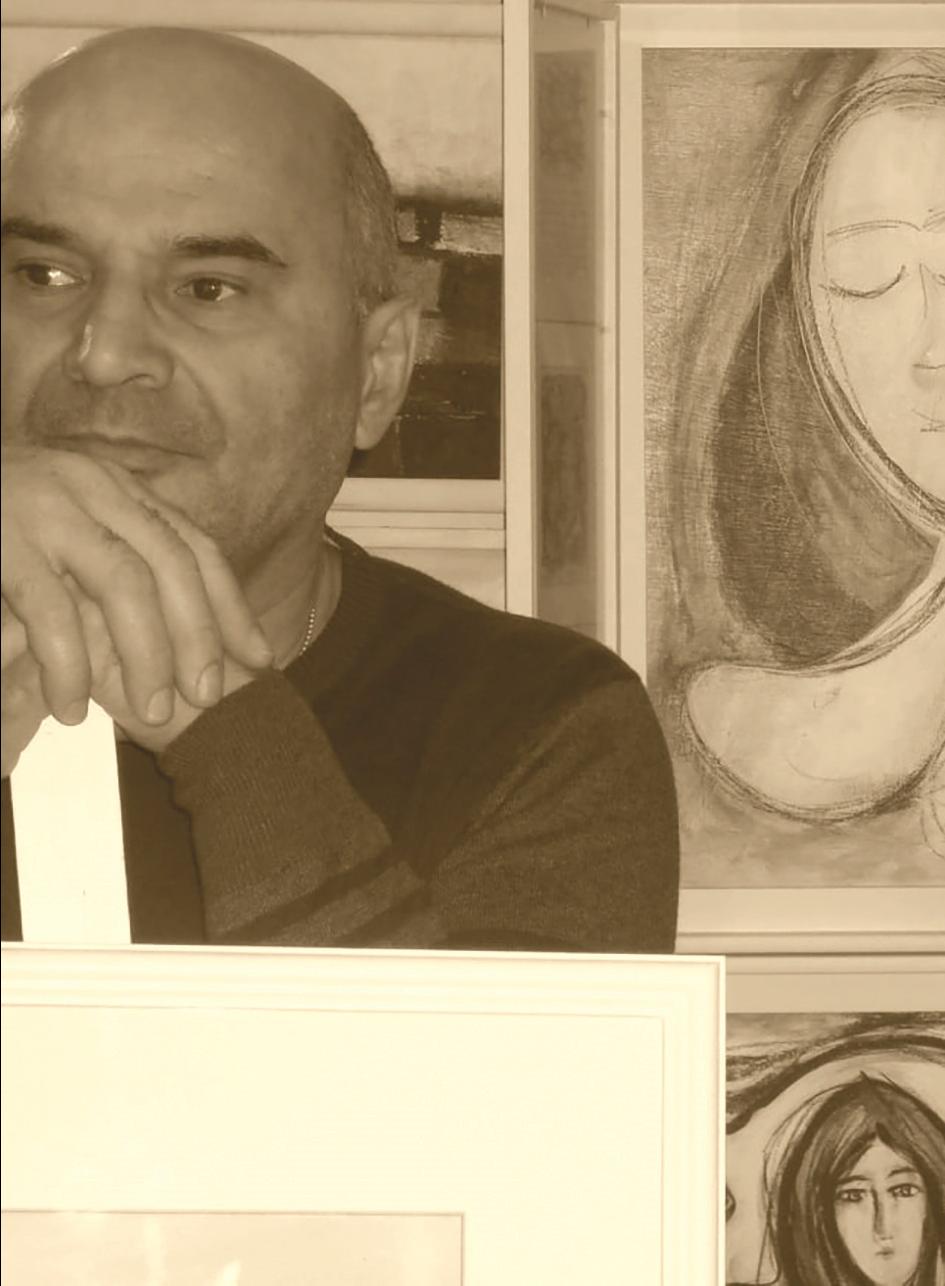 This exhibition, which is his first solo in many years, finds him exploring the themes for which he had made a name for himself in the Maltese burgeoning art scene of the 1990s. The ardour of youth has mellowed as life experience has matured Bonello.

The protagonists of German Expressionism looked away from the incessant turmoil of city life, the politics and the portents of an imminent world war, to find inspiration in an untainted nature, this being an antidote to the stress and evil that was overwhelming them.

The artists of Die Brücke (The Bridge) revelled in the portrayals of themselves and their female companions frolicking in lakes and rivers in the neighbourhood of Dresden. 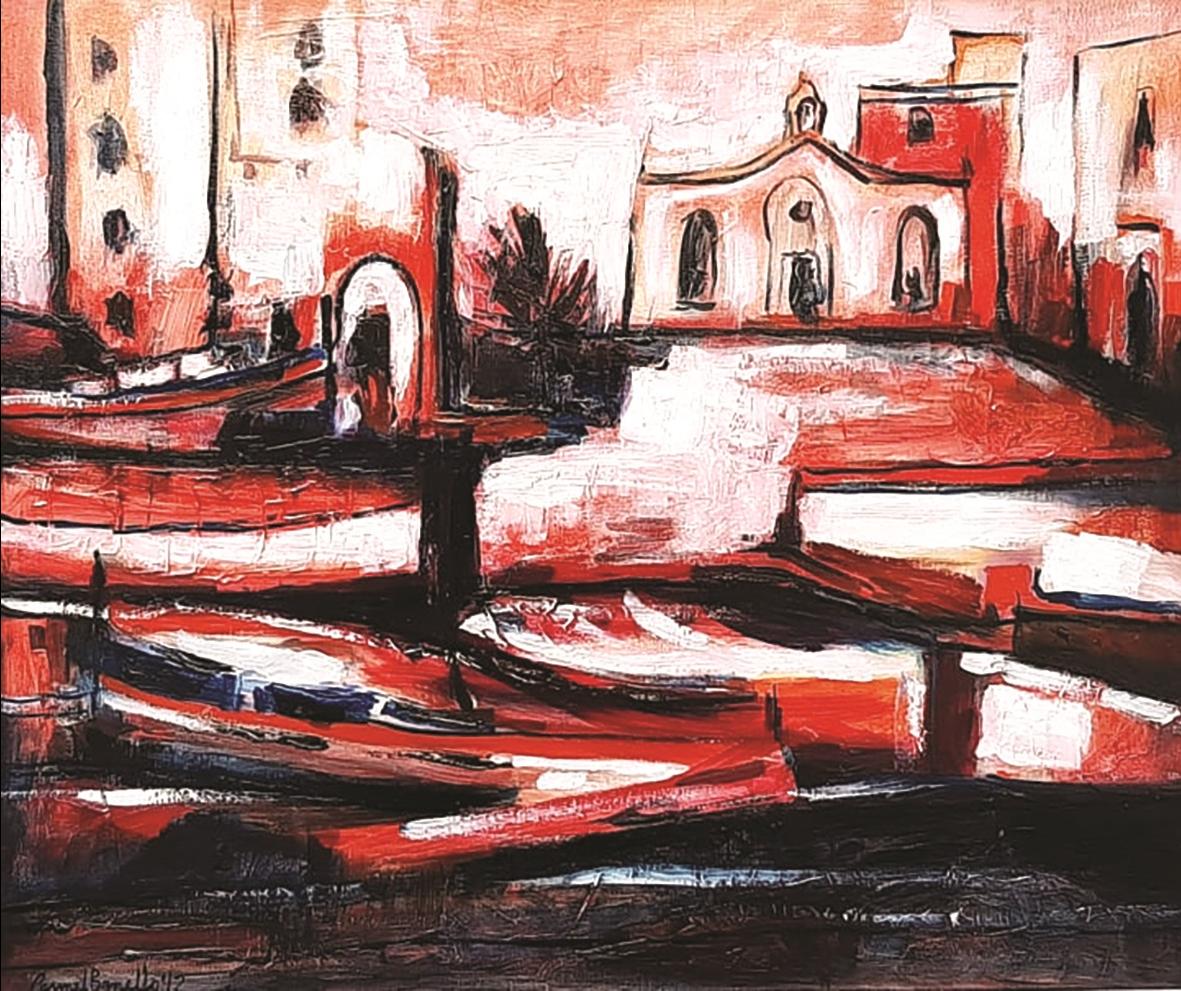 Their colleagues of Der Blaue Reiter (The Blue Rider) were based in the countryside around Murnau and rejoiced in its natural beauty. The French Fauvists, ‘the wild beasts’, were expressionists as well, employing pure colour and fierce brushstrokes. Landscapes got abstracted and free as the expressionist philosophy celebrated the primordial power of nature.

Wassily Kandinsky, one of the founder members of the Blue Rider group who is also generally considered as the father of abstraction, delved into the spiritual aspect of art. He once remarked: “Colour is the keyboard, the eyes are the harmonies, the soul is the piano with many strings”.

His landscapes from the Blue Rider period are chromatic symphonies; the Russian émigré artist used to experience synthaesia, a condition which allowed him to hear colour and see sounds, thus merging the two senses. 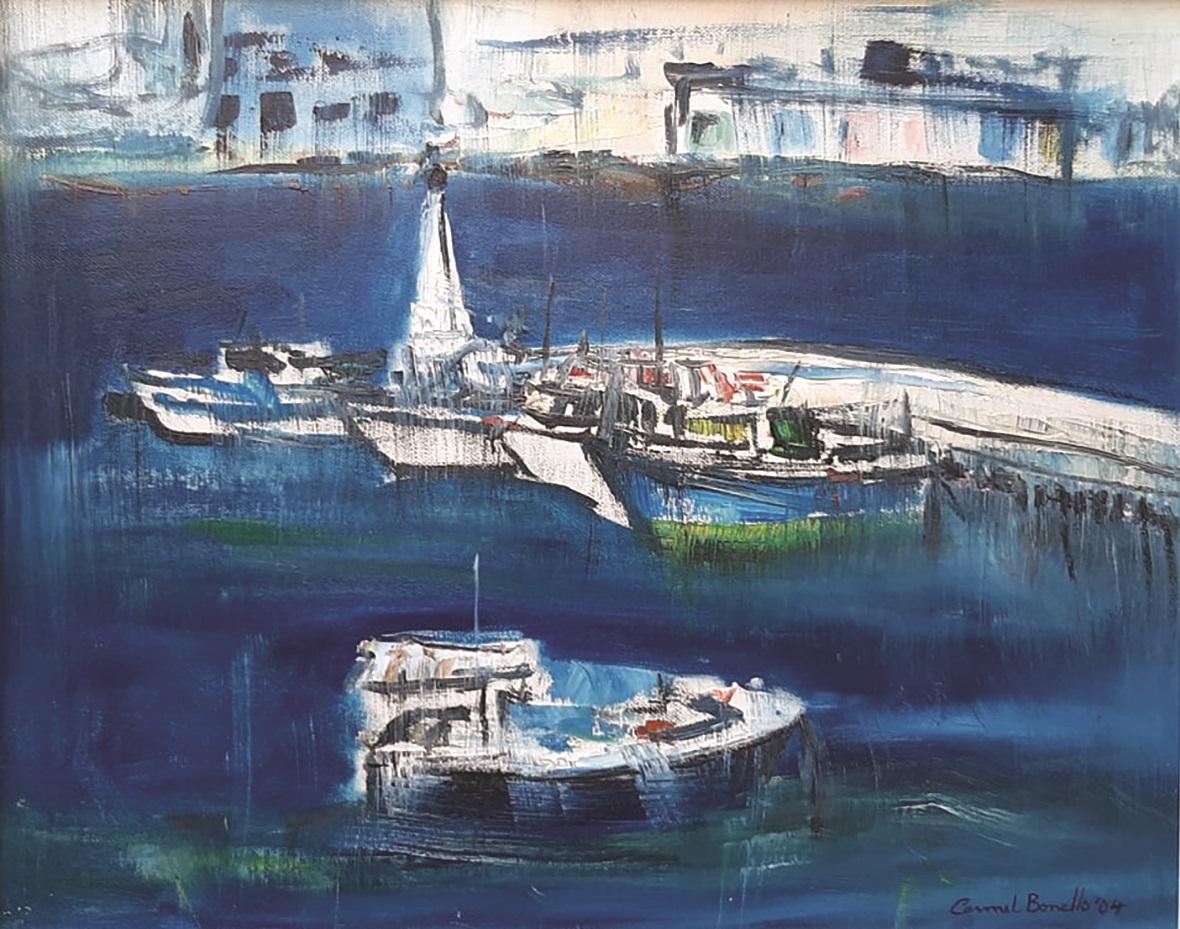 Bonello’s landscapes are explosions of colours at times and subdued compositions at others. His mood changes, mirroring meteorological conditions. His en-plein-air approach allows him to transfer onto his canvases the immediacy of these atmospheric conditions as they interact with the Maltese landscape. His landscapes range from our island’s built architectural fabric to representations of nature at its most pure and essential.

A noteworthy example of the latter is The Last Trees, Mellieħa; the skeletal trunks and branches suggest a change of seasons, from autumn to winter. However, the title could point towards an alternative interpretation, hinting at the massacre of trees in this once picturesque village – the birthplace of 20th-century Maltese artist George Fenech, who relentlessly and lovingly portrayed the village in his landscape oeuvre. Fenech’s Mellieħa has been buried under a flurry of hideous architecture that has ruined its very soul. 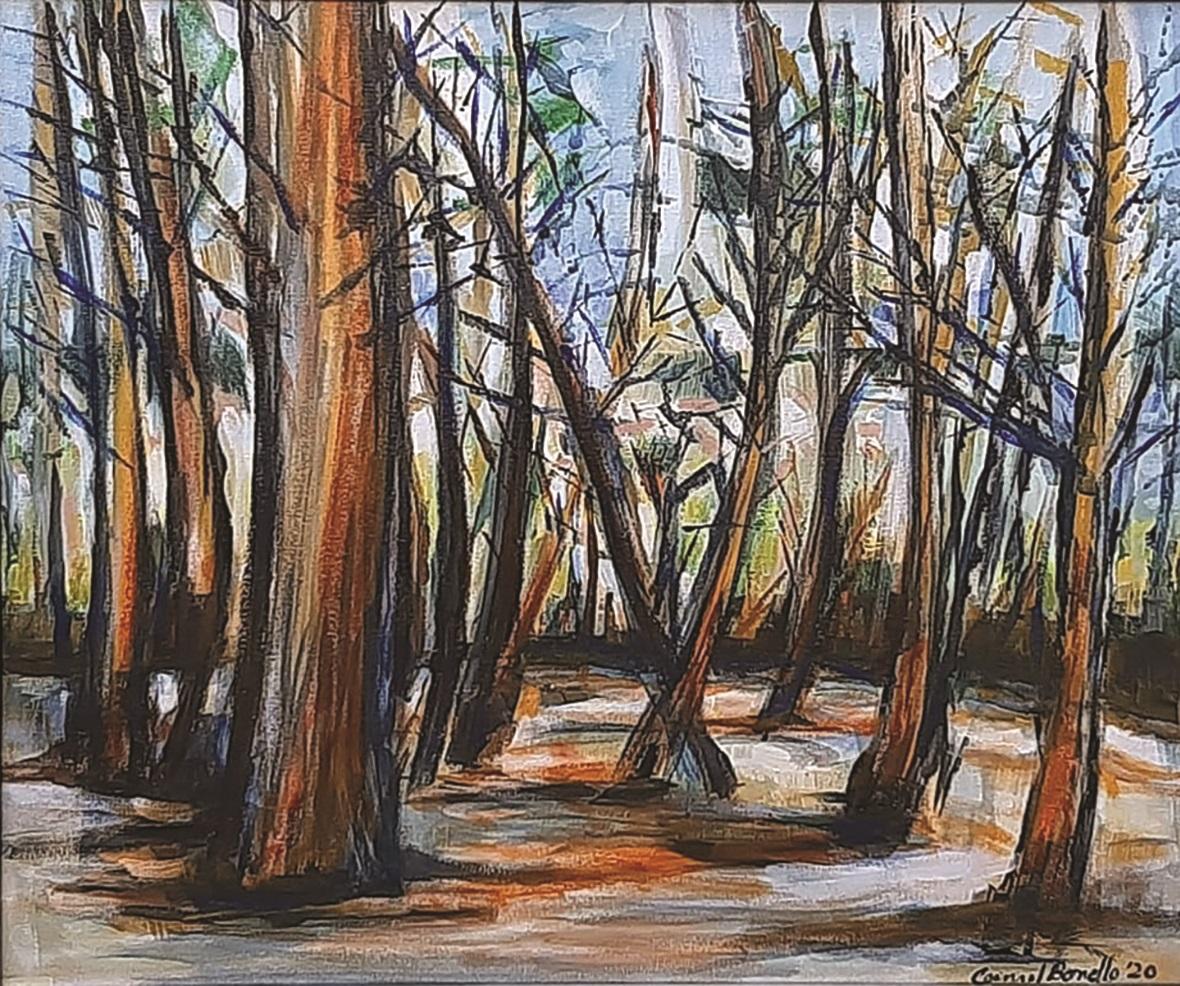 Bonello’s cemetery of trees evokes similarly themed works by Piet Mondrian and Peter Doig. The Dutch artist deconstructed the tree into its most dignified and empirical form, reducing it to a web-like apparition of branches and a trunk. There is a promise of resurrection in spring in Mondrian’s trees, as well as in those of Doig, and of the natural cycle of seasons. Bonello’s small thicket of trees are living on borrowed time, until a developer decides to make hay. There might not be a next spring for these trees after all.

Bonello’s two landscapes of St Paul’s Bay demonstrate his ability as a mature expressionist, adopting a Nicolas de Stäel approach that reconfigures landscapes into areas of pure colour, tethering on a balance between the representational and pure abstraction. St Paul’s Bay Fishing Boats, Menqa is a harmonious composition of reds, blacks and whites, volume being created by the juxtaposition of colours. The flow of the red boats is set off against a black sea in motion. Textures are constantly changing in this work, and all seems to be in a state of flux.

The artist re-arranges the empirical elements defining a fishing village ‒ the boats, the pier and the scheming sea ‒ into narrative poetry

Colour and abstracted form take over in St Paul’s Bay Fishing Boats, Veċċa as Bonello focuses on the deep blue sea that one still can enjoy in some of Malta’s bays and creeks. The artist re-arranges the empirical elements defining a fishing village – the boats, the pier and the scheming sea – into narrative poetry. The artist distils the ugliness of the contemporary architecture out of the composition, to bring forth the spirit of the bay and the murmurs of centuries-old stories that are the fabric of this once humble fishing village. 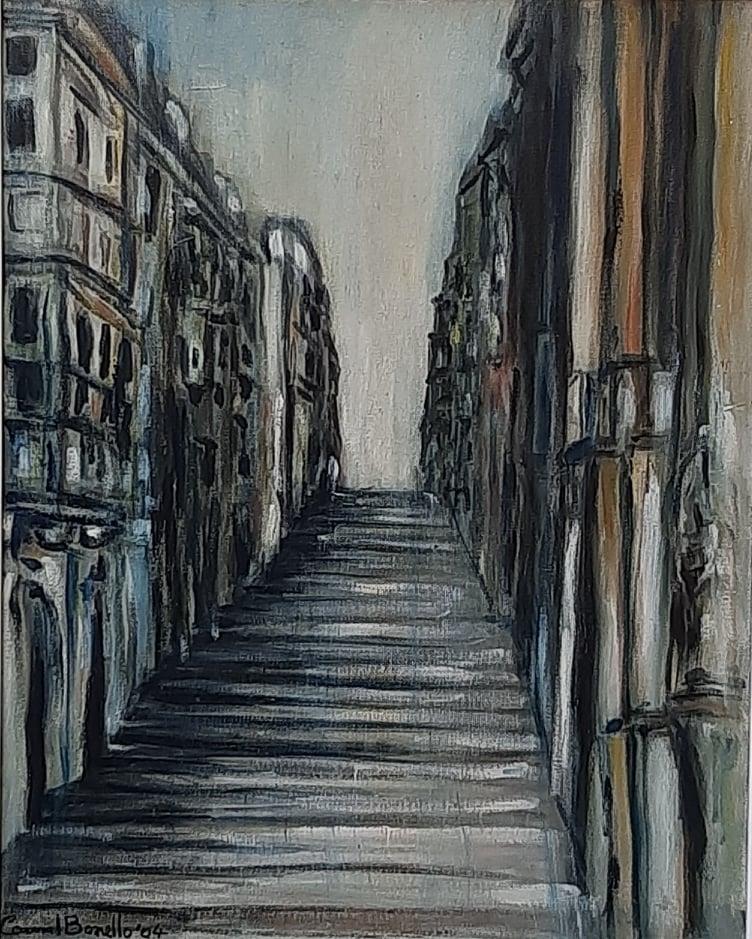 Valletta Street is an almost monochromatic study of a typical street in our capital city, a niche with a saint at the corner as the steps reach heavenwards. This painting is an exercise in minimalist sobriety, the verticals and horizontals luring the viewer into the space while the towering architecture from the time of the Knights of St John menaces to release its ghosts, billowing out of the cavernous chasms in balconies, doors and windows.

One is reminded of French artist’s Bernard Buffet’s technique of representing architecture whereby precision and suggestion are balanced against each other. Buffet’s landscapes always lack the hustle and bustle of humanity – they evoke some sort of post-apocalyptic scenarios that one also finds in Giorgio de Chirico’s metaphysical paintings – a monumental solitude that equates its balance and peace via the absence of human beings. Bonello, as does Buffet, deliberately distorts scales and perspectives, thereby adding drama to the composition.

A juxtaposition of faces, dispossessed of their bodies, is what makes the paintings Humans and Blue Heads eloquent tapestries of human emotion. Doubt, anger, resignation, vulnerability, guilt, strength and amusement are presented alongside each other, a disconcerting comment on the fickle human condition. 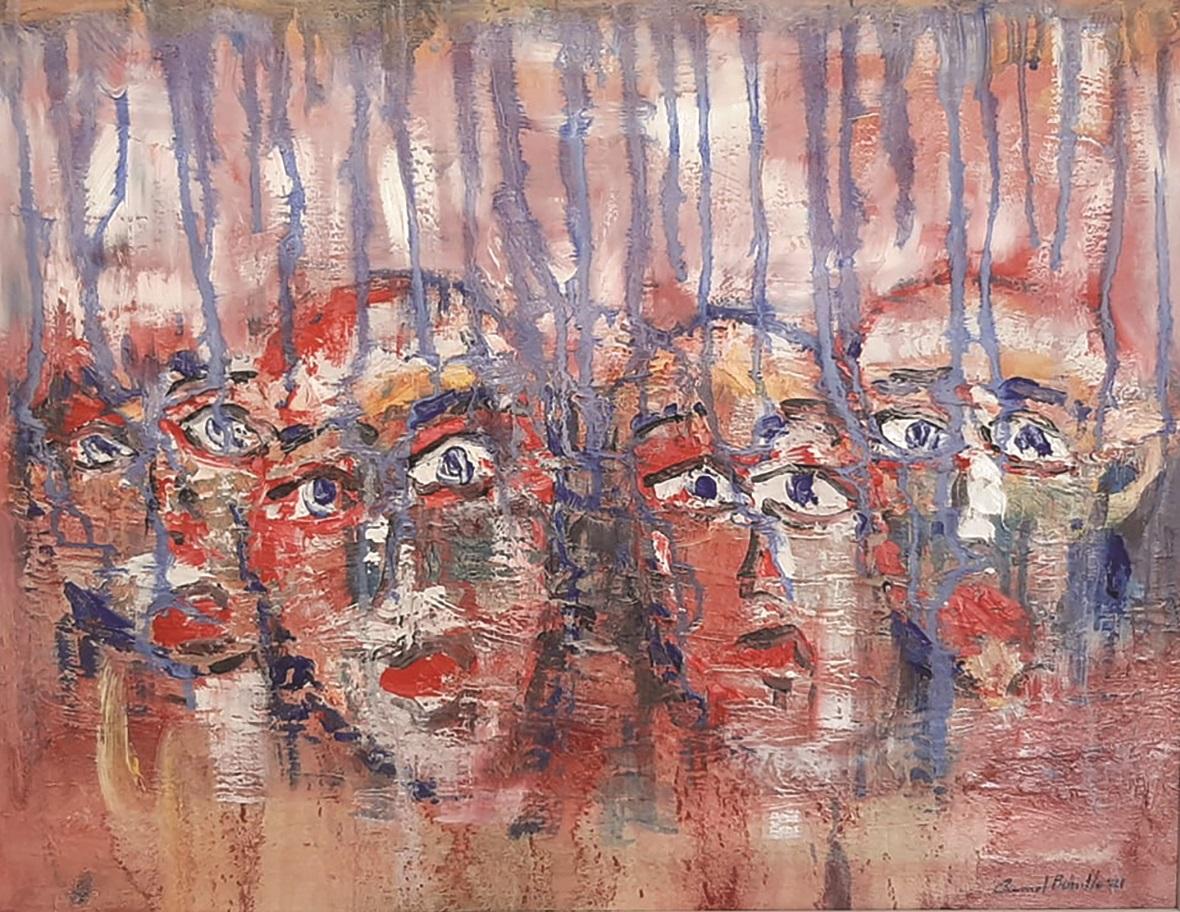 In the former Bonello painting, madness is perhaps symbolised by the face that is upside down. One can be casually reminded of Belgian artist’s James Ensor’s paintings, especially his 1899 Self-Portrait with Masks, in which the symbolist artist is out of his depth in that milieu of contrasts. Bonello’s powerful painting is a testament to the diverse expression of humanity. Sometimes we laugh, at other times we cry and clench our teeth in despair. At other times, we look down in shame or are stoically steadfast.

Bonello abstract expressionist trickles compound further the misery, maybe indicating that the seeds of doubt at times have unspecific and irrational origins. Henri Matisse, in his famous Fauvist portrait of his wife known as The Green Line, splits the face into two, precisely along its longitudinal axis. 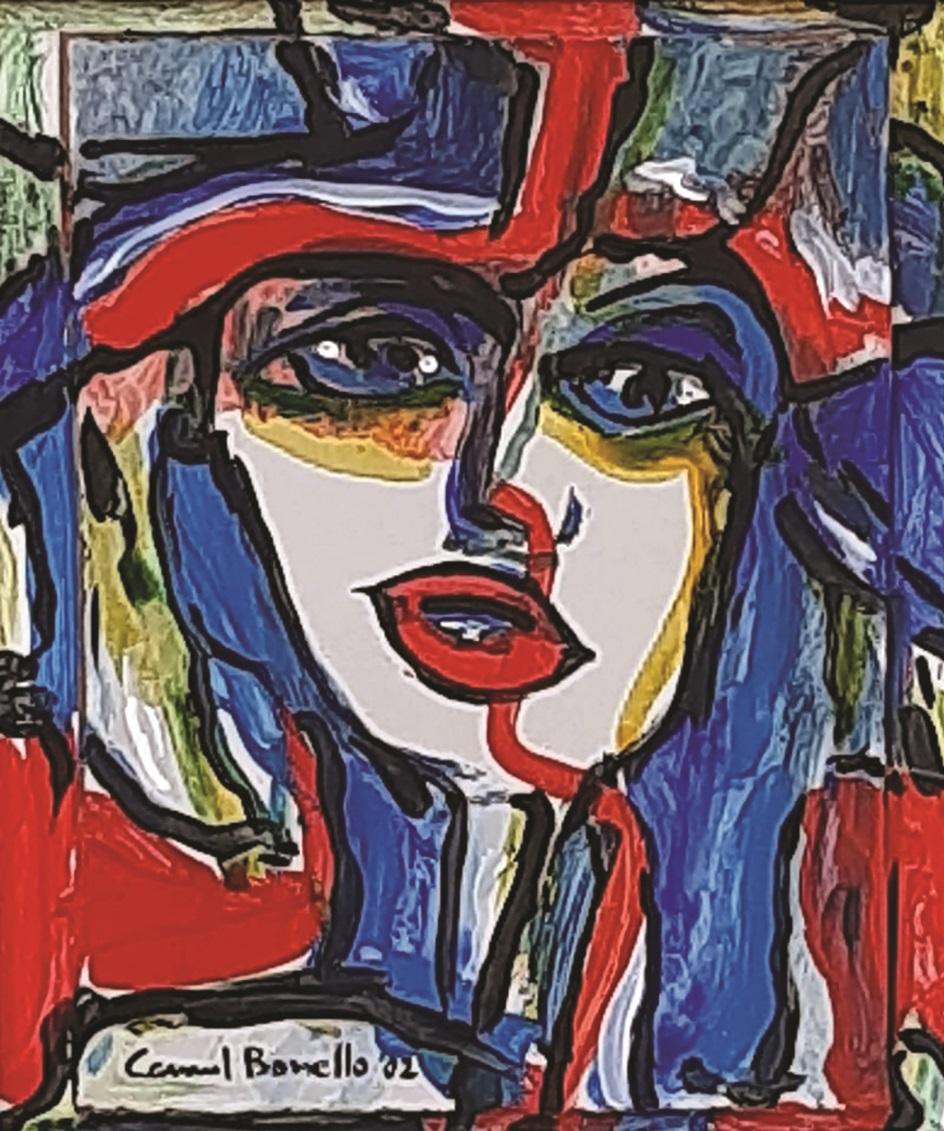 The green line splits it into two almost exact halves, one cold and one warm, without any equivocal jagged or meandering parts. Many interpretations of this then-unconventional approach were attempted when it was first exhibited, even hinting at Matisse’s matrimonial difficulties.

A red line similarly cruises down, splitting Red Face into two, suggesting a battling with internal daemons, a common human legacy. The brushwork is raw and shriekingly expressionist in Bonello’s painting, relying on base primary colours and black to illustrate the screaming dichotomies that challenge our everyday life.

Fragmentation and uncertainty bother us relentlessly in an internal existential debate, tortured and uneven. Bonello, through the meandering line cruising down like a tear, suggests a separation, an imminent uncoupling, a psychological unhinging, as the face menaces to fall apart. 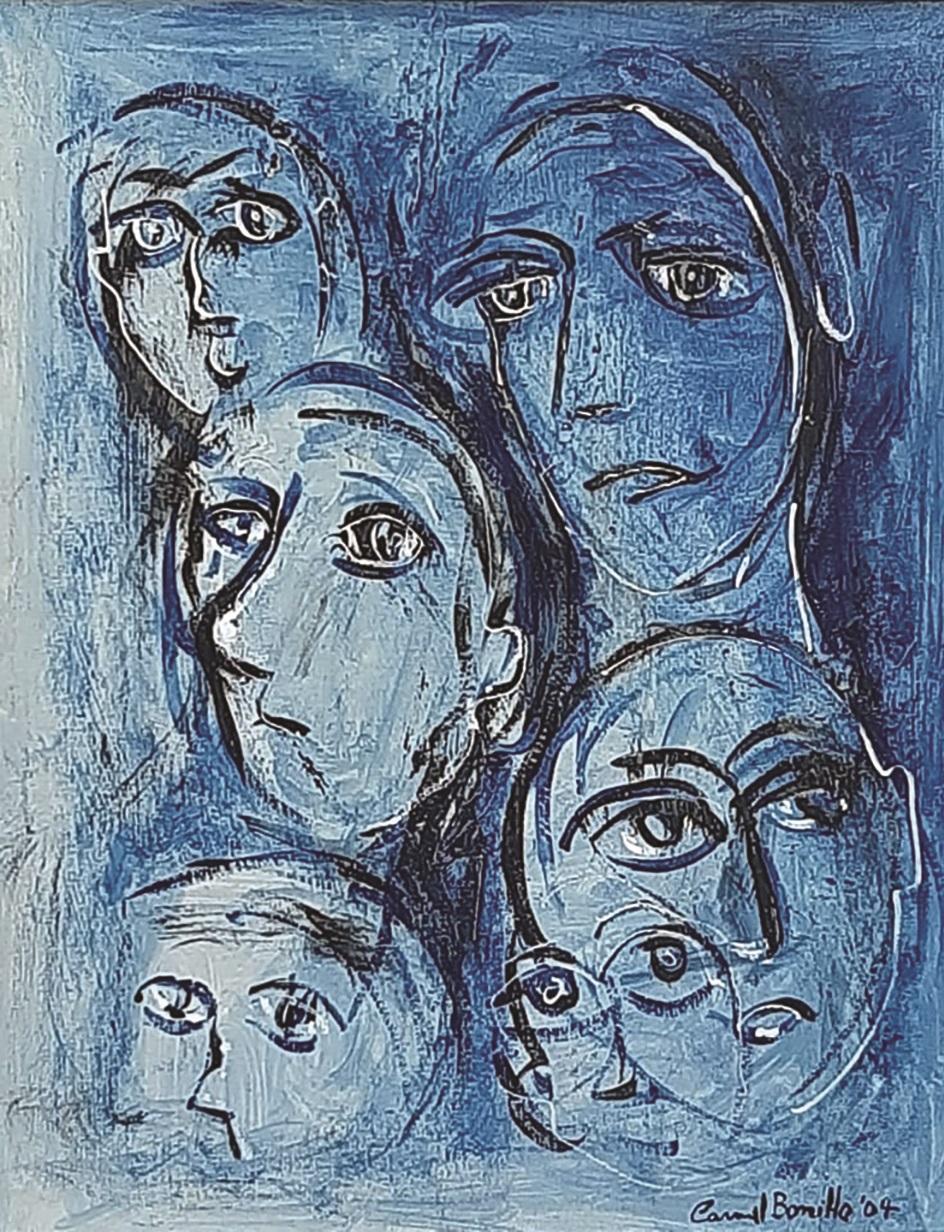 Selected Works finds Carmel Bonello at the height of his maturity. Ernst-Ludwig Kirchner, the quintessential German expressionist said: “A painter paints the appearance of things, not their objective correctness, in fact, he creates new appearances of things.” Bonello endows his landscapes, human figures and abstracts with colour, rhythm and flow, evoking the famous German artist’s words, as he tries to quarry beneath the surface of things.

Selected Works, hosted by Gemelli Art Gallery, Ta’ Qali, is on until December 23. Opening hours are from 9am to 2pm on weekdays, and from 10am to noon on Saturdays. It is closed on public holidays and on Sundays. COVID-19 restrictions apply.