Baroness Patricia Scotland from the UK was elected secretary general of the Commonwealth by leaders of the 53-nation bloc.

She was one of three contenders for the post and will officially take office in April next year as the sixth Commonwealth secretary general.

Born in Dominica, the 60-year-old, is a former attorney general in Britain and will be the first woman to occupy the post. 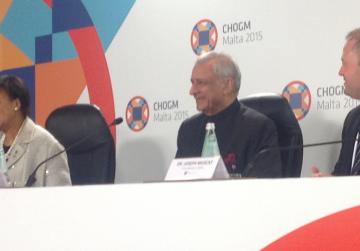 Ms Scotland and the other contender, Mmasekgoa Masire-Mwamba from Botswana, are the only two women to have ever contested the Commonwealth’s top post. The third candidate was Sir Ronald Sanders from Antigua and Barbuda.

The election took longer than expected with sources describing a hot contest between the two women.

In her first comments she said it was "a huge privilege" to occupy an important role.

"The 53 countries have within them the ability and capacity to create something the world desperately needs," she said.