The Waterfront Hotel in Sliema has once again received TripAdvisor’s coveted Certificate of Excellence award.

To qualify for a Certificate of Excellence, a hospitality business must maintain an overall TripAdvisor rating of at least four out of five; have a minimum number of reviews; and have been listed on TripAdvisor for at least 12 months. The 116-room four-star hotel is part of the Mizzi Organisation.

The Farsons Group has unveiled its redesigned website with improved navigation and functionality. The website is compatible across all digital devices including PC, tablet and mobile phone.

“Our website is a showcase for the group and our extensive portfolio comprising both local and international brands. It is a touchpoint for all our stakeholders, whether consumers, trade clients, shareholders, current and future employees or even the local community,” said Susan Weenink, head of marketing and communications.

The website was designed by BPC International and developed by Alert eBusiness.

Thomas Smith’s Freight Forwarding division has been given the coveted Silver Award by Lufthansa Cargo.

Thomas Smith has to date been presented with six bronze awards but the 2014 reward was the first Silver Award. 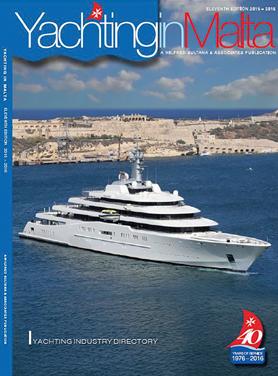 New edition of Yachting in Malta

Copies of the 11th edition of Yachting in Malta are being dispatched to the international yachting media, to foreign maritime traders and renowned superyachts-related entities and builders, as well as to overseas yacht clubs and yachting associations.

This is the 40th anniversary of the first issue of Malta’s Yachting Industry Directory in 1976.

With the cooperation of Transport Malta, copies of Yachting in Malta are regularly made available at fairs like Posidonia in Greece and the Monaco Yacht Show.

Yachting in Malta is published by Wilfred Sultana and Associates.