They described the works in the area known as Tal-Papa as abusive and illicit.

The Planning Authority in July 2021 issued a permit for the partial excavation of rock directly above the rock-cut chamber for the development of a five-storey apartment block. Residents from the area appealed the Authority's decision and called for the permit to be suspended until the appeal was decided. The Environment and Planning Review Tribunal shot down this request arguing that since all works were approved on condition that there be monitoring by the Superintendence of Cultural Heritage, the works posed no threat to cultural heritage, the NGOs said. 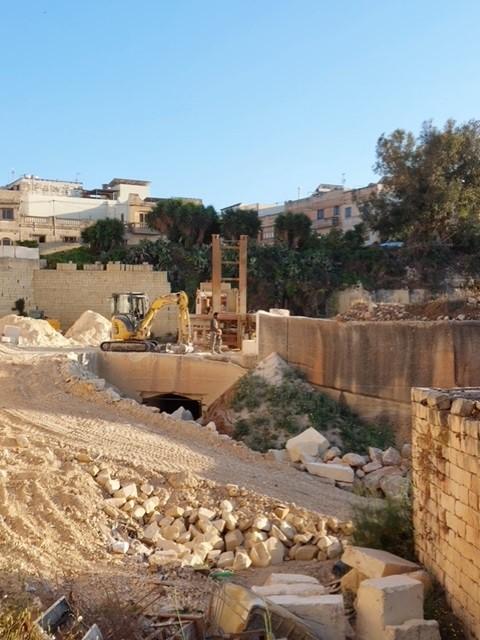 "Despite these permit conditions, works have been ongoing unabated without constant monitoring being carried out. The contractor (also developer) not only ignored the permit conditions but proceeded to cut and excavate the rock above the chamber beyond the boundary of the site subject to the planning permit," they added.

The works spill over onto a site subject to another permit, an outline planning application, which is also being appealed by Din l-Art Ħelwa, The Archaeological Society Malta and residents. No works can be carried out under an outline permit since outline permits only approve the proposal in principle. Developers need to apply for a full development permit before any works can be executed.

"Again, this did not deter the developer from cutting the rock above the chamber entrance and destroying part of the contextual setting of this historical site," the NGOs said.  Graffiti believed to date back to the second world war has also been partially destroyed due to the cutting of the rock.

According to the Development Brief that applies to this site, at least 20% of it was to be retained as public open space and located around these features of historical interest for the public's enjoyment, the NGOs said.

"The Planning Authority unashamedly disregarded these policies and proceeded to approve the monstrous development that if realised will engulf the rock-cut chamber and destroy this historical landscape."

The Superintendence of Cultural Heritage and Planning Authority's Enforcement Unit have been notified of the ongoing illegal works threatening the stability and safeguarding of the rock-cut chamber of historical interest.