The Planning Authority was forced to issue an enforcement order against a number of contraveners, including construction magnate Joseph Portelli, as works on the assembly of an illegal concrete batching plant in Gozo continued unabated despite an order to stop.

Industry sources told the Times of Malta that last week, after the illegalities were revealed by Times of Malta, PA officials turned up at the quarry in Kerċem, and ordered all works on the assembly of the massive batching plant to stop.

However, the sources said that as soon as the PA officials left the area, trucks could be seen once again in the area and workers continued with their work despite the regulatory authorities’ strict orders.

Asked about the developing situation, a spokesman for the Planning Authority confirmed that its orders had been ignored and that the authority had no other option but to proceed with a formal contravention order.

“The Enforcement Directorate has initiated formal enforcement procedures against the contraveners in view that instructions to cease works last week have not been complied with,” the PA spokesman said.

The Times of Malta is informed that prior to an official enforcement notice, the owners of the illegal batching plant were instructed both verbally and in writing to halt immediately their illegal actions.

Asked to state who the owners of the illegal batching plant were, the PA did not give details.

However, the enforcement order has been issued primarily against Mr Portelli, of J. Portelli Projects, and Mark Agius, known as Ta’ Dirjanu, a partner of Mr Portelli in various construction projects across the island.

The PA’s warning was also issued against Carmel and Michael Cauchi, the operators of the quarry known as Ta’ Qasam San Pawl and against the Lands Authority which owns the public land.

Industry sources said that while the second-hand batching plant was imported from Sicily by Mr Portelli and Mr Agius, it was being assembled inside the quarry, which officially is leased by the government to the Cauchis.

The sources observed that according to current laws, the Cauchis are precluded from leasing government property to third parties.

It is not yet known what, if any, is the connection between the quarry’s operators (the Cauchis) and the importers of the batching plant (Portelli and Agius).

Last week the Times of Malta revealed that for the previous two months, a massive concrete batching plant was being built inside a Kerċem soft stone quarry without any permit. Despite that works were known to many Gozitans in the in-dustry and everything was happening in broad daylight, the PA said that it only got to know of the illegal operation through this newspaper.

Industry sources questioned why, despite their defiance of orders given to halt the works, the PA has still not sealed-off the batching plant and ordered its dismantling.

The Kerċem quarry is also the subject of various enforcement orders pending for years.

Twenty-one years ago, in 1998, the operators of the quarry were ordered to stop extending the perimeter of the quarry illegally and not to continue to extract soft stone from public land that did not form part of the permitted quarry.

Despite pending direct action by the PA to stop the illegalities, the quarry kept expanding over the years, with stone quarried illegally put on the commercial market and used in various construction projects. In 2008, the quarry operators applied to sanction the illegalities through architect Carmel Borg, a former Labour MP.

The application is still pending and no decision has been taken yet by the PA. 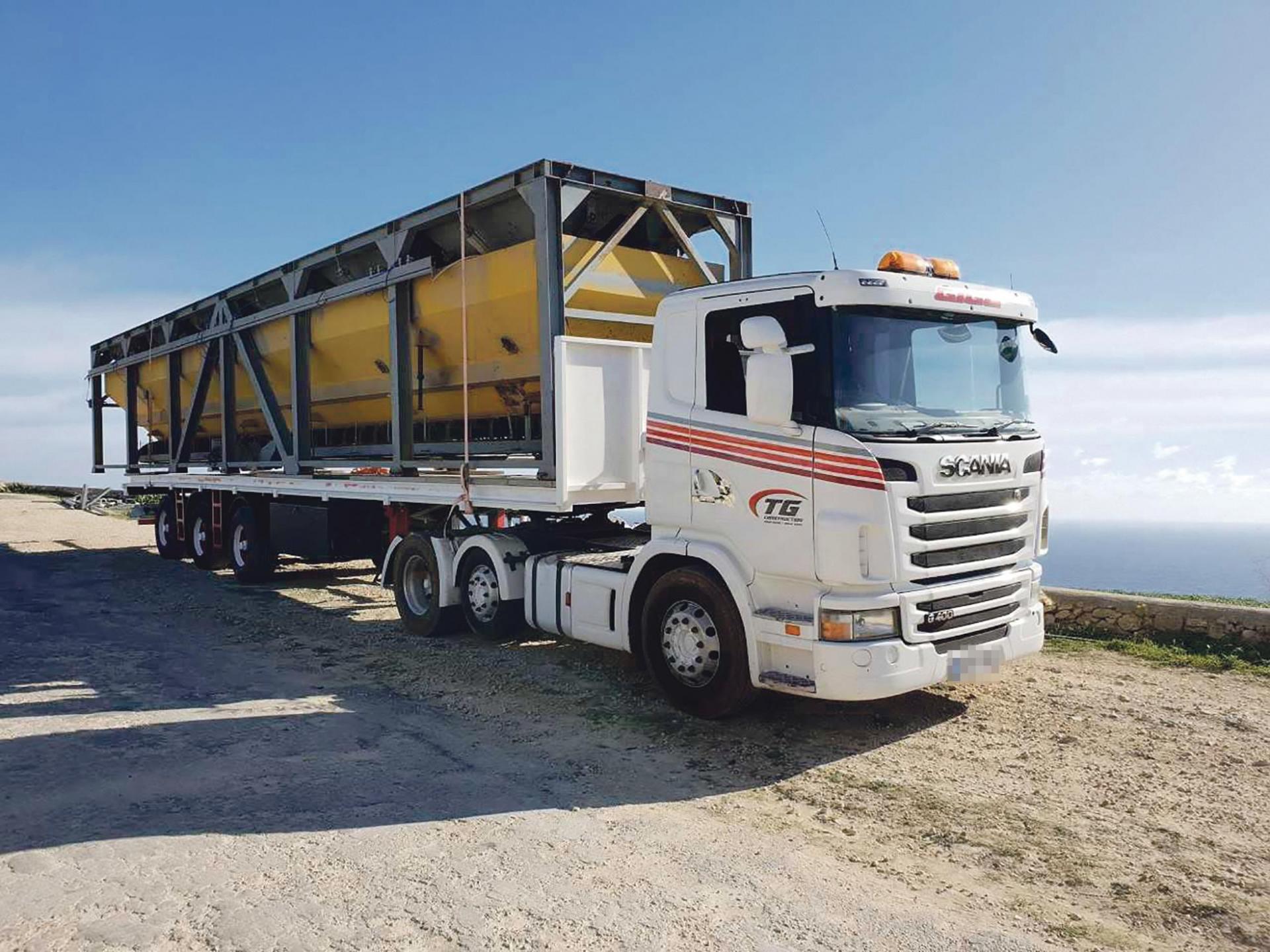 Part of the second-hand batching plant being transported to the quarry.