Magistrate Consuelo Scerri Herrera should have been made a judge years ago, Prime Minister Joseph Muscat said on Monday.

Speaking to reporters shortly after Dr Scerri Herrera’s swearing in as judge, Dr Muscat said her vast experience spoke for itself.

Her nomination had been shrouded in controversy as a judicial appointments committee had turned down her first nomination, only for it to reverse its decision once she was nominated a second time.

To Dr Muscat’s flank, Justice Minister Owen Bonnici on Monday afternoon told reporters that Dr Scerri Herrera had not been rejected by the commission, but that the government had been advised to resubmit her nomination.

During her swearing in, the magistrate highlighted her “21-year career” and said she was determined to attack the backlog of some 1,000 cases in the Criminal Court over which she will preside.

Magistrate Anthony Vella was also sworn in as judge at the same ceremony. Dr Vella had till today been the magistrate leading the inquiry into the murder of Daphne Caruana Galizia.

Asked about concerns surrounding his nomination, Dr Muscat insisted their would not be any delays in the inquiry as a result of the nomination. Magistrate Neville Camilleri will be taking over the case.

Dr Muscat said Dr Vella had been an obvious choice for nomination as he was the senior magistrate. 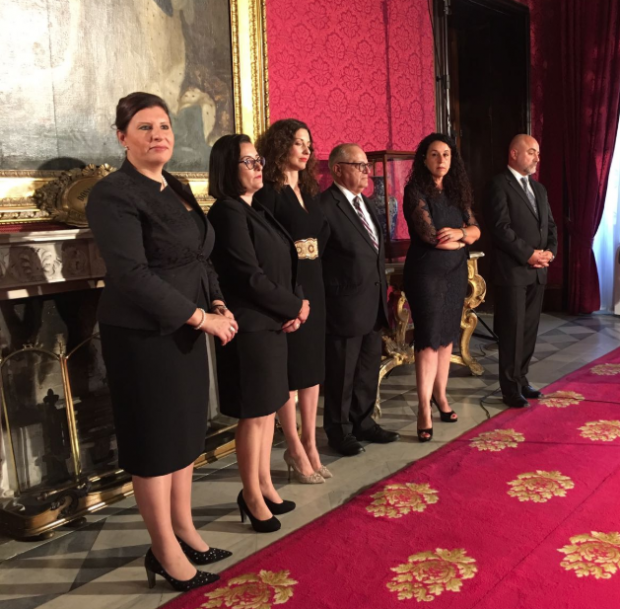 “You could practically say that he was the next in line,” Dr Muscat said.

Also promoted judge is Magistrate Grazio Mercieca, who was made a magistrate in November 2016. Dr Mercieca, 61, served for many years as president of the Labour Party's Gozo section. In 2013, he was appointed chief adviser to the then Gozo Minister.

The appointments mean that women will be in the majority for the first time – 23 women to 22 men. The judiciary is now 51 per cent female, compared to 35 per cent in 2013.