This award is very significant for the firm, which has dedicated much of its practice to major projects in the capital city, projects which are familiar to all, such as the regeneration of Valletta Waterfront and the Barrakka Lift.

“Ever since the beginning, we embraced the historical environment of Valletta as a crucial part of the fabric of our identity. Therefore, being acknowledged for our services in heritage-led innovation is an important recognition for us,” AP executive directors David Felice and Konrad Buhagiar say. 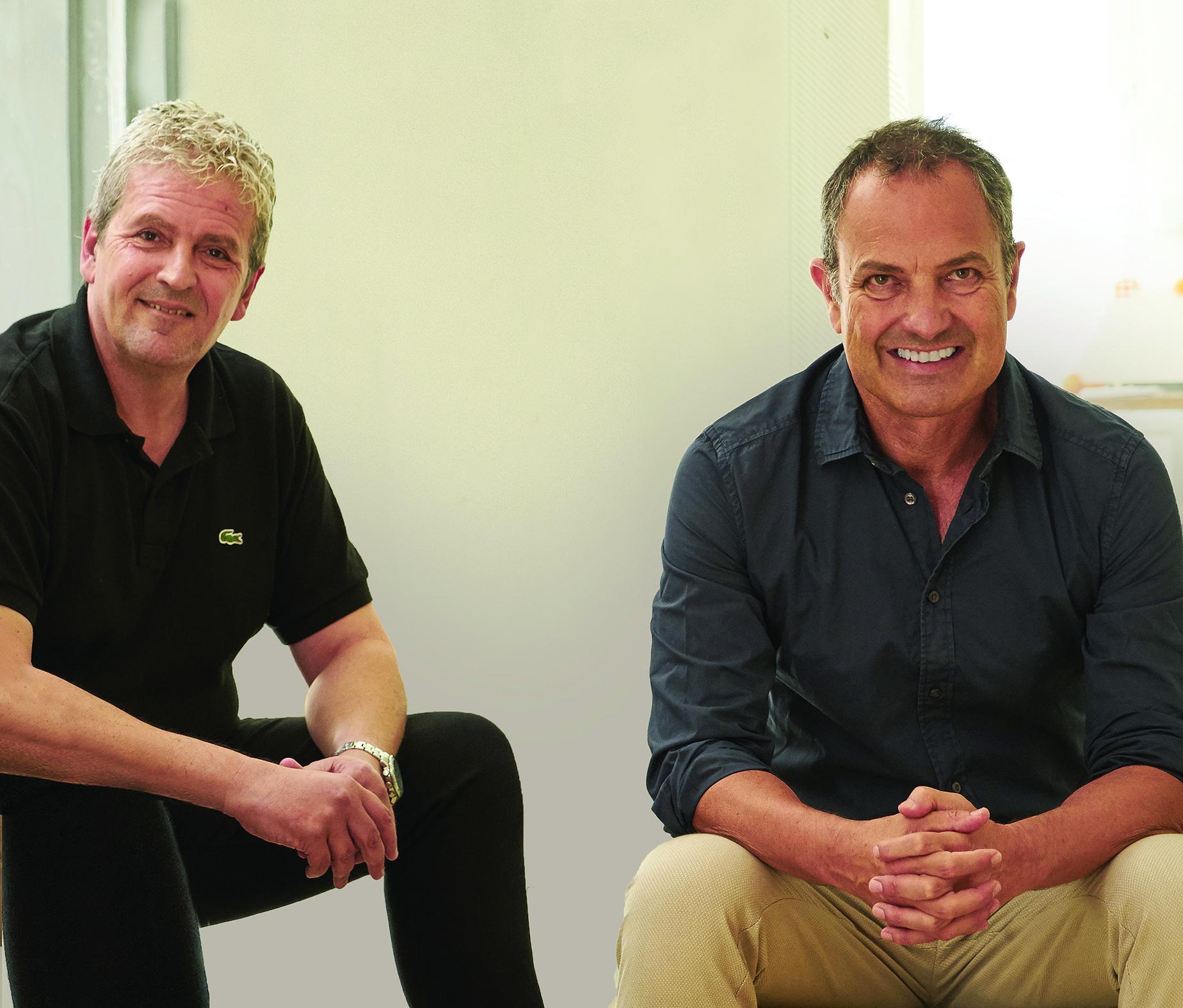 The firm started out with a small group of friends with a passion for architecture and design and, in particular, for what they could contribute to the heritage that characterises our islands. Since day one, their aim was, however, to provide this heritage aspect with a new interpretation that, besides preserving the legacy of the past, “enables the creation of the heritage of tomorrow”.

The words of the jury at the Ilucidare Special Prize perfectly resonate with AP Valletta’s mission and vision: “Its work is rooted in the theoretical principle that heritage is not static but rather in constant evolution. The firm has made Valletta into their living lab for testing new heritage ideas.”

AP has a strong link with the capital city as, in the past 30 years, it has been commissioned to design and execute a substantial number of projects in Valletta. These include the above-mentioned Barrakka Lift, the new museum at St John’s Co-Cathedral, the restoration of St Paul’s Anglican Cathedral and the Manoel Theatre,and the new Parliament Building and Opera House, in collaboration with Renzo Piano Building Workshop.

The firm is also involved in research projects such as Novelletta, a continuous, cyclical and open-ended urban proposition for the city which they presented at the London Festival of Architecture and at La Galerie d’Architecture in Paris.

Besides, AP is based in the city and they have just completed the restoration of their premises, a 17th-century building.

“We are, thus, also physically linked to our city as we live, breathe and work in Valletta,” Felice notes enthusiastically.

Heritage ‘is not static’

Since its inception, the firm has actively contributed to research in the fields of heritage and innovation.

“Our work is rooted in the theoretical principles that heritage is not static by definition, being the link between past, present and future, in constant evolution. Knowledge depends on the tools that are used to create it and disseminate it and it must adapt to the latest technological developments while remaining scientifically valid,” Buhagiar notes.

“We aim to challenge the perception and preservation of local heritage by advancing new themes for debate that should be central to the sustainability of heritage, such as post-colonial issues, and also at raising awareness on the importance of reviewing and, perhaps, widening the current definition of what qualifies as ‘heritage’ and what the role of architects is in that respect. Moreover, we strongly believe that the needs of communities should be given priority and that it is crucial to improve communication  between them.”

The importance of connectivity, both within the areas of intervention and with external areas, physically as well as conceptually, is a central element in the firm’s work and they see it as a driver for a sustainable repurposing and restoration of heritage.

“An example in this respect is the series of interventions which started with the regeneration of the Valletta Waterfront, where new life was injected into what had become a derelict area, a far cry from the glory days of the Grand Harbour as a buzzing cultural and commercial centre,” Felice says. “The regeneration of the zone as a cruise line terminal with ancillary facilities eventually led to the redesign of the Barrakka Lift, which, in turn, opened up new possibilities for connectivity across the harbour and encouraged the regeneration and landscaping project of Dock 1.”

The architects remark that various NGOs, government entities and local councils were involved in these projects, resulting in an overall major improvement of heritage assets and the creation of new opportunities for local stakeholders.

They also point out that they are currently investing a lot of energy in integrating Building Information Management (BIM) software with these research principles, bringing better monitoring of the performance of heritage buildings and smoother collaboration among different consultants and stakeholders. 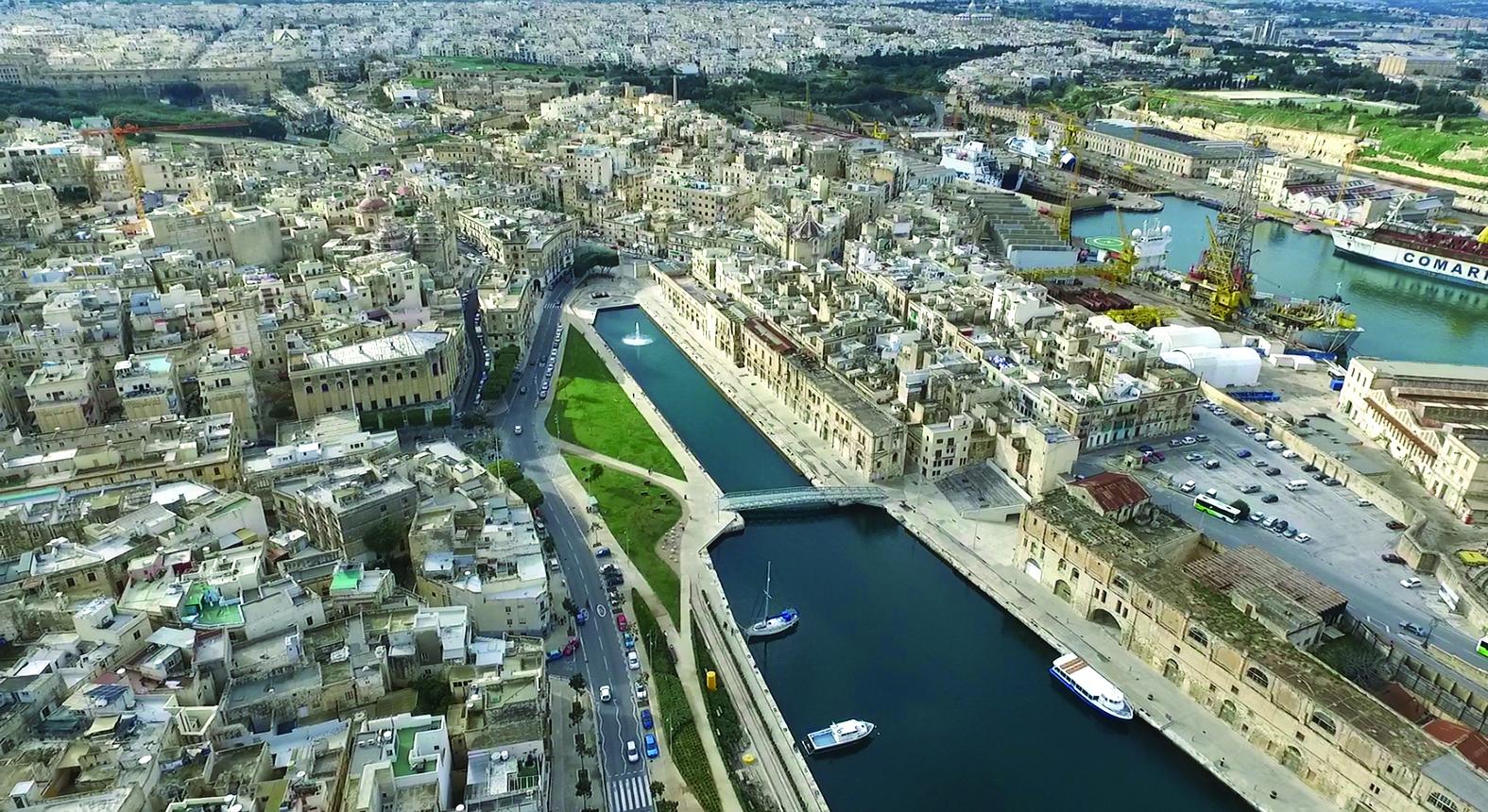 The firm’s ongoing ambition is to bring clients, sites, concepts and construction together in a sustainable environment and they believe that focusing on design quality could be an effective tool to fight the uglification culture that has come to characterise Malta.

AP believes in a proactive approach to nurture constructive debates and prompt tangible solutions that would be a driver for cultural change.

“Addressing Malta’s issues with planning and development with revised policies alone merely addresses the symptoms at the surface, rather than the underlying cultural causes,” Buhagiar comments.

“Building is an act of culture and any policy aiming at supporting a cultural shift cannot restrict itself to the protection and safeguarding of heritage but needs to have a vision that reaches beyond this.”

With this spirit, the firm has recently partnered with the Malta Chamber of Commerce to cooperate actively on an extensive research project which will explore how design, together with research, educational and economic measures can shape the future of the built and unbuilt environment in Malta.

This collaboration project, called ‘Building Futures’, brings together AP’s knowledge and experience with research and design projects with the Chamber’s commitment to develop a concrete vision for sustainable economic growth.

A milestone for contemporary architecture

This means that rehabilitation is not about making a building look new but rather to place inside the structure of the old building an “implant” to regenerate it.

“This juxtaposition, as well as the interest generated by the contemporary intervention, enhances and renews the appreciation of a historical building. This modus operandi has been at the core of all our restoration projects, from Kenuna Tower in Gozo in 1999, up to now,” Felice says. 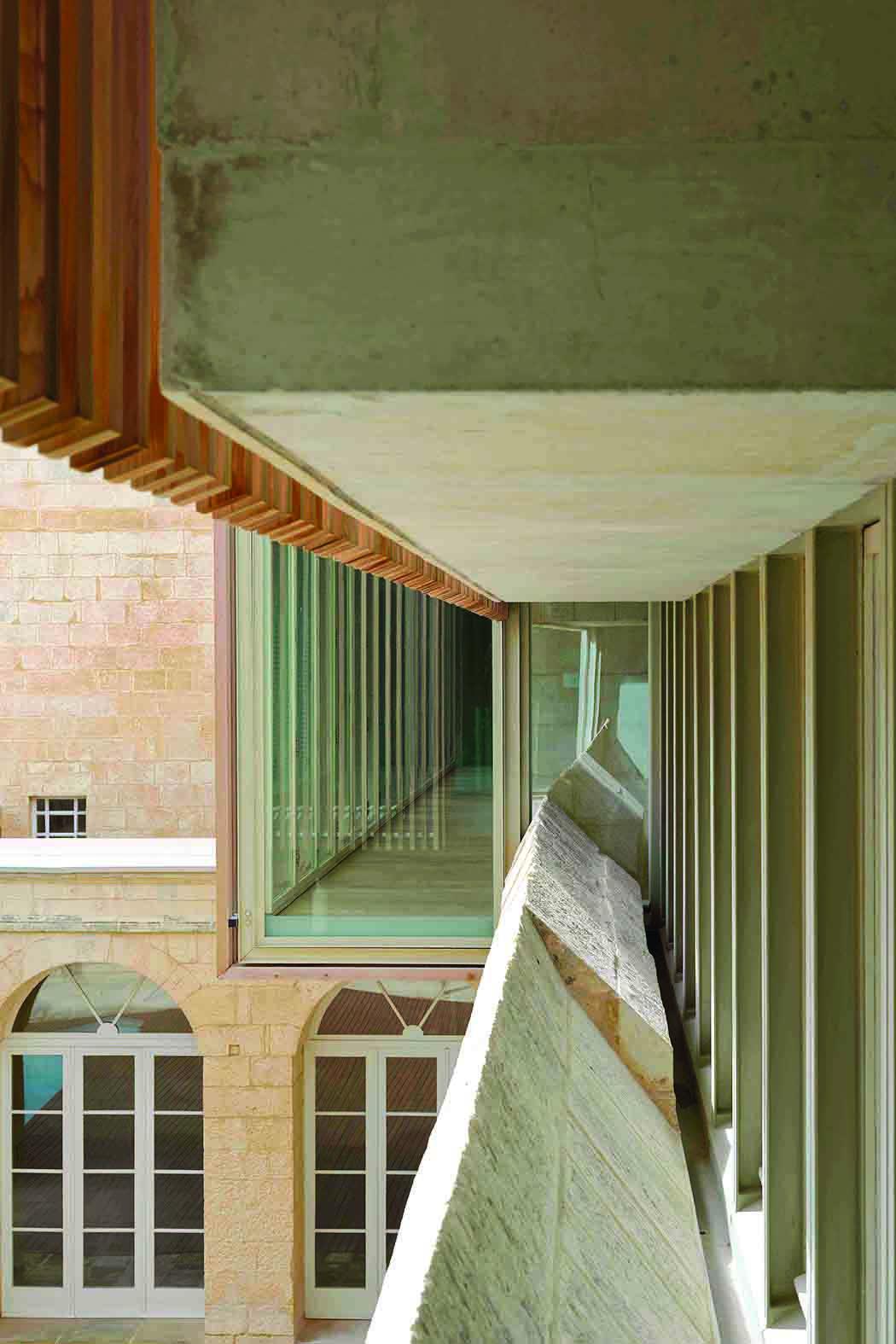 Above and below: The PA recently scheduled the 17th-century Villa Castro, in Naxxar as a Grade 2 protected building. The scheduling includes a modern extension designed by AP Valletta in collaboration with Jens Bruenslow. Photos: Alex Attard

Last month, the Planning Authority scheduled Villa Castro, a 17th-century property in Naxxar, as a Grade 2 protected building. The scheduling comprises an extension carried out in the courtyard area, which was designed by AP Valletta in collaboration with Jens Bruenslow in 2016.

“We aimed at creating a specific architectural language which could bring this 17th century palazzo into a new contemporary and timeless dimension,” Buhagiar says.

He explains that the restoration element of the project entailed the securing of dangerous parts, the removal of inserted structures and accretions which conflicted with the authentic organisation of space and the clarity of architectural form, the reopening of blocked arches and the introduction of additional openings to allow, firstly, for more light into the building and, secondly, to strengthen the already well-defined symmetry of the garden and courtyard facades.

The same principle guided the organisation of the external areas, with the garden, the decking and the pool retaining the central axes of the garden.

The extension was also designed and grafted on the boundary wall to mitigate the negative visual impact of a recently constructed neighbouring block of apartments, opening up towards the garden and the internal courtyards.

“All new extensions were conceived as simple volumes and are defined and positioned to complement and coexist with the existing building. They are treated in such a way as to allow maximum light on the inside while retaining a monolithic appearance from the outside in sympathy with the old building,” Felice further elucidates. 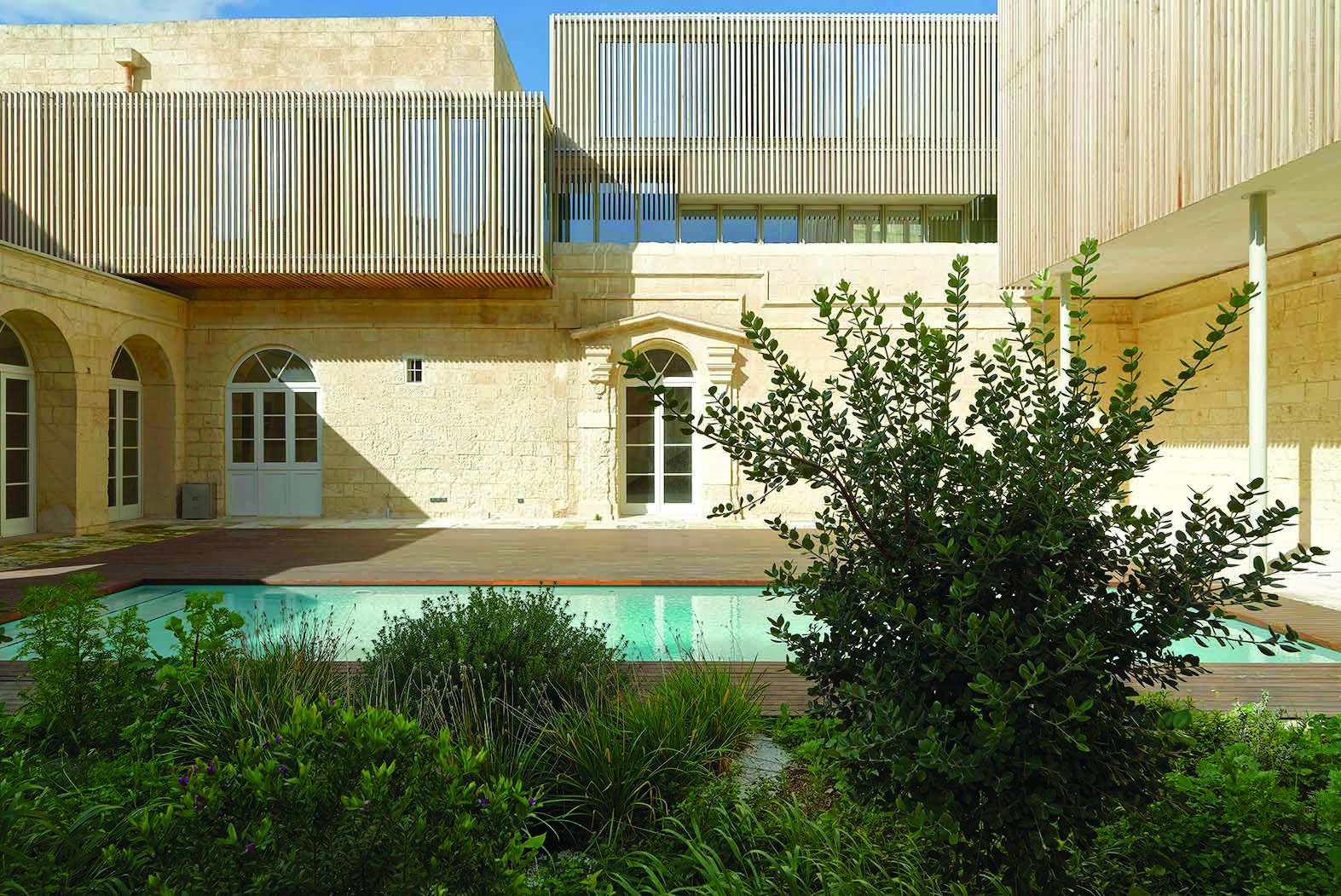 The inclusion of the extension into the listing is considered a milestone for Maltese contemporary architecture, drawing the attention to contemporary heritage and architectural interventions of quality on the island.

“Scheduling a contemporary extension implies that we are working towards creating what will be the heritage of tomorrow. It is also a positive signal for the building industry in Malta, which will,  hopefully, contribute to set up a new set of parameters for contemporary interventions of quality.

It also makes us move forward to the idea that when we talk about heritage, we refer to buildings from the past,” the architects conclude.