A contractor has been charged with the grievous bodily harm of a migrant worker, who was dumped on the side of the road after falling two storeys from a construction site.

Glen Farrugia, director of J&G Farrugia contractors was also charged with trying to cover up the traces of a crime by removing the Gambian man from the accident scene on Tuesday.

Farrugia denies a list of 20 charges including a series of breaches of employment and health and safety laws. He was denied bail.

The charges are related to an incident that caused widespread outrage on Tuesday when 32-year-old Jaiteh Lamin was abandoned on Selmun Road, Mellieħa, after he fractured his spine in a construction site fall.

The court heard how Farrugia showed no remorse and did not cooperate with police when they questioned him about the incident.

Setting out the case against him, Inspector George Frendo alleged Farrugia had moved his illegally hired employee from the site of the accident at Triq Dun Franġisk Sciberras Mellieha and dumped him on the road.

When police were called to the scene, the victim was "barely able to speak" but was able to identify Farrugia.

The 31-year-old contractor from Żebbuġ is also accused of failing to protect his workers by not providing protective gear and not taking all necessary measures to ensure safe work at a height.

He is also accused of employing workers without permits and failing to pay his employees adequately, including on public holidays and for overtime.

Farrugia's defence lawyers contested the validity of the arrest, saying Farrugia was not formally told he was under arrest, nor given any reasons why he was held.

Arguing for bail to be granted, lawyer Franco Debono said his client had a "quasi-clean criminal record", would submit to all court guarantees and did not pose a flight risk.

However, Magistrate Nadine Lia denied bail, given the circumstances of the case, saying there was a fear of Farrugia tampering with evidence and adding that the victim still needed to testify.

12.24pm That's all from court today. Thank you for joining us. In a few minutes, we'll have a brief summary of the sitting.

12.20pm After hearing submissions, the court considered the circumstances of how the alleged offence took place and also that the victim must still testify, and so denies bail. Farrugia will be taken to prison.

The court said there was "still a real fear of tampering with evidence", as well as the fact that evidence must be preserved.

However court urges the prosecution to summon the victim to testify at the first available opportunity after his hospitalisation.

12.16pm Debono lists other reasons bail should be granted. He has a family, has no intention to abscond, can guarantee to appear at all hearings, will submit to any court condition and had gone to the police station immediately.

The defence contests that he tampered with evidence and says that the evidence could have been preserved in a magisterial inquiry, which did not take place.

12.14pm Debono continues. He says his client has the right to silence but at "an opportune stage" will give his version, which "is somewhat different to that of police".

12.10pm The defence sets out reasons why bail should be granted. Debono says the accused has a "quasi-clean criminal record".  He had a conditional discharge dating back to 2008 or so. "Hence he’s not untrustworthy," Debono says.

12.07pm The defence says that save for the charge of grievous bodily harm, the other charges don’t exceed one year's jail term. Those are occupational health and safety and employment related, he points out.

12.06pm The prosecution objects to bail saying that Farrugia tampered with evidence and so there’s real risk that he will do so again. He also showed no remorse, they say. "He might tamper with the victim who is in hospital," the prosecution adds.

12.04pm Farrugia faces 20 charges in all in relation to the incident and various employment law breaches.

12.02pm Farrugia stands to confirm that he’s a building contractor, aged 31, from Zebbuġ. He pleads not guilty.

12pm The inspector reads out at top speed the lengthy charges. It's difficult to keep up.

The courtroom is packed with officers, lawyers and relatives all packed in. The accused’s plea should now follow.

11.45am Inspector Frendo begins to read a lengthy list of charges against the 31-year-old contractor from Zebbuġ.

Not informed of arrest

11.41am Debono claims Farrugia was not formally informed of his arrest and the reasons why. Arrest is the most sensitive moment in the whole course of the case, he argued. Even if a person is placed in handcuffs, police must still formally inform the suspect of his arrest, he said.

Frendo clarifies that he cannot vouch for something a colleague might have said. He wasn’t present at the time. Frendo makes reference to the charges and says that they show clearly why he was arrested.

11.38am Frendo hits back. "Police must establish facts," he says. "At the time of arrest police had reasonable suspicion that Glen was the employer and he was summoned for questioning, as done in the ordinary course of work."

He said it was an early stage of the investigation and charges were not clear.

At 4pm on Tuesday, the suspect released a statement. At first he refused legal assistance at Qawra police. Later he chose not to sign the police statement.

11.33am Defence lawyer Franco Debono makes reference to article 355 of the Criminal Code. This is about the legitimacy of the arrest. He says it’s the prosecution who must get evidence, direct not hearsay, that the arrest was valid. He says Frendo’s testimony shows that we do not know the officer, name and rank who decided to arrest Farrugia.

"At least the prosecution should be able to tell us who took the decision to arrest to ensure that legal requisites were satisfied. So we contest the validity of the arrest," he says.

He refers to a decree in separate proceedings where arrest was deemed invalid. Lawyers fire names and dates of decrees to buttress their arguments.

11.30am The prosecution informs the court that a Jobsplus representative is here regarding charges concerning employment and health and safety issues. There are also representatives from the Department For Industrial and Employment Relations, lawyers Andrew Grima and Mattia Felice.

No evidence to preserve

11.26am The defence asks if the police requested a magisterial inquiry. The inspector confirms but says that duty magistrate Rachel Montebello said that since the victim had been moved from the accident site, there was no evidence to preserve.

11.23am The defence is contesting the validity of the arrest and asks for more detail.

The prosecution says Farrugia was informed of the arrest and refused legal assistance. He was taken to Mosta police station and did not answer most of the questions.

The victim explained that he was taken from the accident site to that Selmun road and police felt that was sufficient suspicion to question the employer, the prosecution explains.

11.20am Inspector Caruana continues for the prosecution. The inspector says the victim identified the employer, despite being barely able to speak. Farrugia was summoned to Qawra police station.

11.16am The prosecution sets out the case against Farrugia. They allege a man involved in a work place accident was moved from the site and dumped at Selmun road. The victim fell down two storeys. His employer allegedly moved him and told him to wait for help there. The victim fractured his spine.

The employer should have safeguarded his worker, the prosecution say. Farrugia did not cooperate with police, they add.

11.13am Glen Farrugia enters the hall and talks to his lawyers. Superintendent Priscilla Caruana Lee and Inspector George Frendo are prosecuting.

11.04am Magistrate Lia is hearing another case. While we are waiting, you can read our journalist Kristina Abela's interview with Jaiteh. 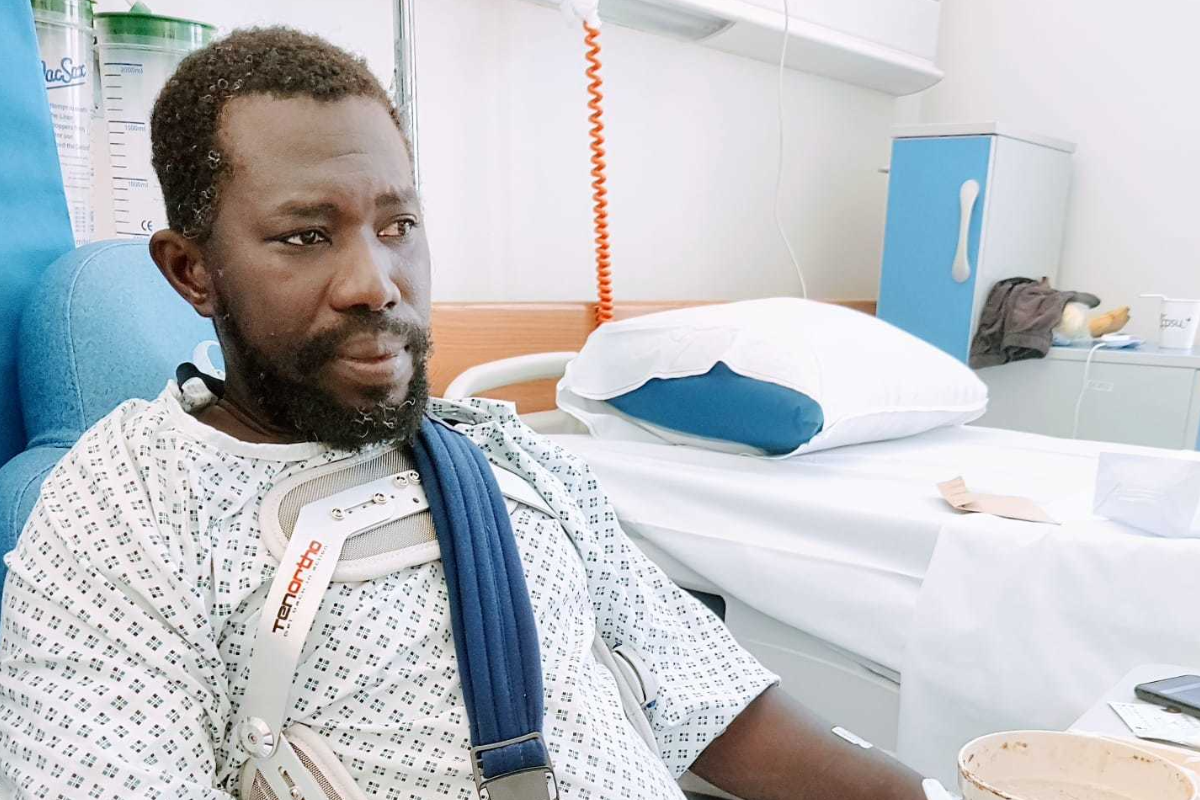 Jaiteh Lamin is being treated in hospital for neck and back injuries. Photo: Caroline Galea

10.58am Glen Farrugia has just arrived at court, accompanied by a police officer. We're in hall 14, waiting for the case to begin. Farrugia is being represented by lawyers Franco Debono and Matthew Xuereb.