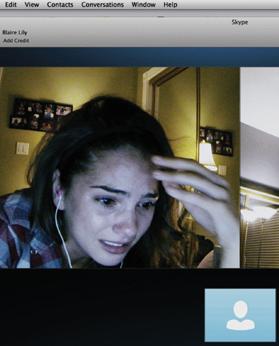 Just as the found-footage genre breathes its last breath, along comes Unfriended which gives it a bit of a new lease of life, to produce an attention-grabbing horror film that turns an ordinary Skype conversation between friends into a brutal and bloody nightmare.

Blaire (Shelley Hennig) and her boyfriend Mitch (Moses Storm) are having a rather intimate video chat, in which their friends Jess (Renee Olstead), Adam (Will Peltz), Ken (Jacob Wysocki) and Val (Courtney Halverson) suddenly butt in.

As the group chats away, they notice the presence of a seventh person, Billie227, in the video chat.

Simultaneously, Blaire begins receiving messages on her Facebook page, ostensibly from Laura Barnes; a schoolmate who committed suicide a year ago after an embarrassing video of her went viral.

As Blaire desperately tries to get to the bottom of what she initially deems to be a tasteless prank, Billie227 suddenly joins the chat, embroiling the friends in a deadly game of truth or dare in which secrets, betrayals and lies come to light.

The movie unfolds in real time, and what we are witness to in 80 or so minutes are the visuals from Blaire’s laptop screen as she jumps from her Skype window, to Facebook and back with a few stops on other social media sites in between as she and the gang try and identify the mysterious hacker.

When his/her intentions become increasingly sinister, their nerves collectively fray by the minute.

It is certainly nothing more than a gimmick; yet kudos to director Leo Gabriadze, working from a tight script by Nelson Greaves, for creating suitable tension and sustaining it throughout the film’s running time.

The tone becomes more and more menacing as each participant – spoiler alert! – is picked off one-by-one in rather gory ways. That it is all done so imaginatively means you don’t have time to pick at the large holes in the plot.

The cast is also to be applauded for their performances. That they are a bunch of fairly unknown actors adds to the tension. They make for a very convincing group of ordinary teenagers chatting to one another on a school night.

Being constrained to a computer screen for the most part must have been rather limiting, yet the cast succeeds in creating a sextet of relatable, three-dimensional people despite them falling into recognisable stereotypes – the beauty, the bitch, the party animal, the geek etc.

The fact that you do feel for them says much about their performances. The character of Billie227 also built up rather chillingly from harmless troll to mass murderer.

That along the way, Unfriended has some valid commentary about the pitfalls and possible dangers inherent in our obsession with social media also helps.

But the film-maker’s ultimate aim is to entertain, not educate. And it does so with a modicum of intelligence seriously lacking in many films of this ilk.