Updated at 10.50am, adds PD statement

The Corinthia Group will be given a concession to build 100,000 square metres of commercial and residential real estate and offices, including towers, on the same controversial model and conditions granted to the db Group for the ITS site.

The deal, which involves public land acquired specifically for tourism purposes, is being piloted by Tourism Minister Konrad Mizzi and was presented to a parliamentary committee last week, a day before the House rose for the Christmas holidays.

Dr Mizzi sought approval of the deal less than 24 hours after voluminous documents were submitted Parliament.

The documents, which are not yet publicly available, include a draft contract granting the St George’s Bay peninsula to the developers for the next 99 years.

After Nationalist MPs on the National Audit Office Accounts Committee, particularly Beppe Fenech Adami and Mario de Marco, posed a string of questions on the venture, the government agreed to postpone the vote to get “more clarity on the questions raised by the Opposition”.

Corinthia chairman Alfred Pisani and other company officials present for the sitting stopped short from giving details on how many apartments and offices will be built. However, Mr Pisani did say the idea was to have no more than 18 storeys of real estate for speculation purposes. Later, architect Edwin Mintoff said that no precise details could be given at this stage because designs were still being discussed with the planning authorities.

Original designs had included two high-rise towers, one of them including a hotel. The towers are planned to stand in front of the db Group tower, which is set to feature more than 100 luxury apartments.

Corinthia, which already owns three hotels on in the area, known as Malta’s golden mile, acquired the land through deeds signed in the 1990s on condition it would only be used for touristic purposes, basically hotels.

However, the hotel chain is now seeking to reduce the number of hotels from three to two, upgrading them to higher levels and building a significant number of apartments and office blocks to sell them to third parties.

The real estate involved in the project would rake in hundreds of millions of euros for the company, real estate sources said.

Despite the land in question being among the island’s most valuable in terms of real estate, the Corinthia Group is not expected to be paying current premiums. In fact, it is insisting that the same formula the government used in 2017 to transfer the former Institute of Tourism Studies site and adjacent properties to the db Group would also apply in its case. 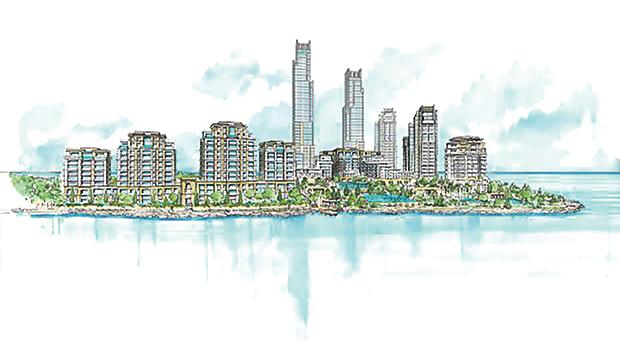 An artist’s impression of the planned development.

The db Group had acquired 25,000 square metres of prime land for €15 million, paid over seven years, in a highly-criticised agreement also negotiated by Dr Mizzi. The deal is being investigated by the National Audit Office.

Dr Mizzi conceded during the committee sitting that the proposed project was not possible unless planning laws were changed. The building of residences is not allowed in the area.

Times of Malta is informed that, on the basis of the db Group deal, the terms of the payment would be very advantageous to the Corinthia Group, which, according to estimates, is expected to fork out about €4 million for the first four years of the project.

Mr Pisani told the House committee he was seeing the project as “an investment in the country”. The ‘six-star’ hotel would be charging tourists €450 a night, up from the present €150, he said.

According to the first details of the draft deal, Corinthia will only be bound to develop the ‘six-star hotel’ and 15,000 square metres of real estate within five years from the granting of the permits.

Mr Pisani said the investment in the project, which he dubbed “a spectacular project for Malta”, would range between €300 and €600 million.

The project will stand next door to the db Group’s City Centre Project.

In a statement, Partit Demokratiku said it was categorically against the parliamentary resolution.

“When are people going to realise that it is PL and PN Company Ltd versus peoples’ interests? The spending power of people is spiralling down. There are no handouts for them but there are handouts for the millionaires.”

PD asked how could Dr Mizzi justify the concession by quoting the db Group concession when it was abundantly clear that the public was totally against it.

At the public hearing it was very clear that the db Group development would be traffic critical, even with the still to be defined traffic tunnel. Had any study been made on the impact of the new development, PD asked.

It added that the original Paceville masterplan was sidelined after massive public disapproval, ostensibly to draw up a new one. PD wondered why this new development is taking place without a masterplan in place when it was established that projects such as Villa Rosa, Mercury House, Pender Place, dB ITS mega-project and several others in the pipeline were to be developed.

PD asked if all PN and PL MPs were in agreement with this development and what did those with seats in the affected district think.

It asked if the government and the PN seriously thought that €68.4 million was adequate compensation to the public for the change of use of such a huge tract of land, which was more than twice the size of the db Group concession.

Rather than using an accounting firm’s estimate of the value of the land, would it not have been fairer and more accurate to consult the Association of Estate Agents, it asked.

Partit Demokratiku said it viewed this deal as yet another example of how the two main political parties had the interests of big business rather than the people’s they were meant to serve at heart.