Corinthia Group’s management arm, CHI, has entered into preliminary agreements to provide technical and management services for an iconic hotel and residential tower near Doha, Qatar, close to the venue of the 2022 soccer World Cup final.

Designed by Zaha Hadid Architecture, the 70,000 sq.m. project is under construction and scheduled for completion in 2020. It was commissioned in 2013 by the brother of the Qatari emir.

The 38-storey hotel is to be shaped like a hyacinth.

International Hotel Investments which owns CHI also said in an interim directors' statement today that discussions were proceeding with the planning authorities in Brussels regarding the opening of the Corinthia Grand Hotel Astoria after the building which houses it is refurbished.

“The necessary funding for the hotel is in the final stages and work on the refurbishment of this listed property is expected to start towards the end of the year,” it said. 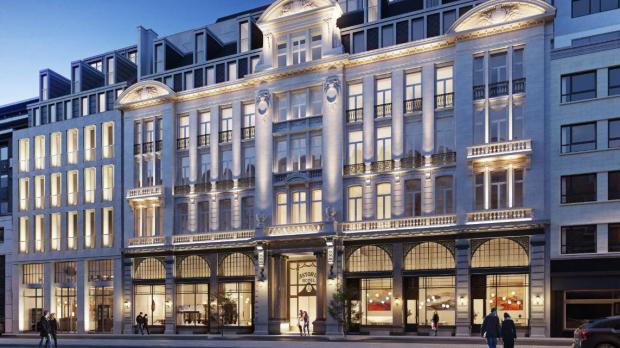 The new Corinthia hotel in Brussels.

Situated on the historic Rue Royale, just minutes from the Grand-Place, the Corinthia Grand Hotel Astoria is housed in a landmark building constructed in 1909 at the behest of King Leopold II.

The building, unused for 10 years, was acquired by Corinthia Hotels in 2016 and is to undergo extensive redevelopment. The new hotel will comprise 127 bedrooms and suites, as well as extensive banqueting, dining and spa facilities.