A cruise ship carrying more than 2,000 passengers was not allowed to enter Malta on Friday, with authorities taking the decision following a public outcry about coronavirus infection fears.

The MSC Opera will be re-routed elsewhere, the government said on Friday afternoon, saying that the decision was taken "following public alarm raised by misleading information given by a local media outlet through a story riddled with partial truths and erroneous details".

The government statement did not name the media outlet in question but said that it had decided to reroute the ship "so as to avoid further concern among the Maltese public".

It said the decision to reroute the ship was taken mutually, together with ship operators MSC Cruises.

MSC Cruises told Times of Malta the ship would now head to Messina, Italy and noted that "no passengers or crew members currently on board the ship have or have had any flu-like symptoms."

Doctors had threatened industrial action if the cruise ship, which was due to arrive in Malta at 6pm on Friday, was allowed to dock.

Concerns about the ship were sparked after a former passenger, an Austrian man, was diagnosed with COVID-19. The 2,302 passengers aboard the ship have been given the all-clear by medical authorities, and in its statement the government noted that all the evidence was that "there is no case of Coronavirus on board".

The ship docked in Sicily on Saturday morning. Italian media reported that port authorities would allow passengers to disembark but would screen them using thermal scanners.

Earlier on Friday, Martin Balzan, the president of the Medical Association of Malta, said that he had raised the issue with Charmaine Gauci, the superintendence of public health. 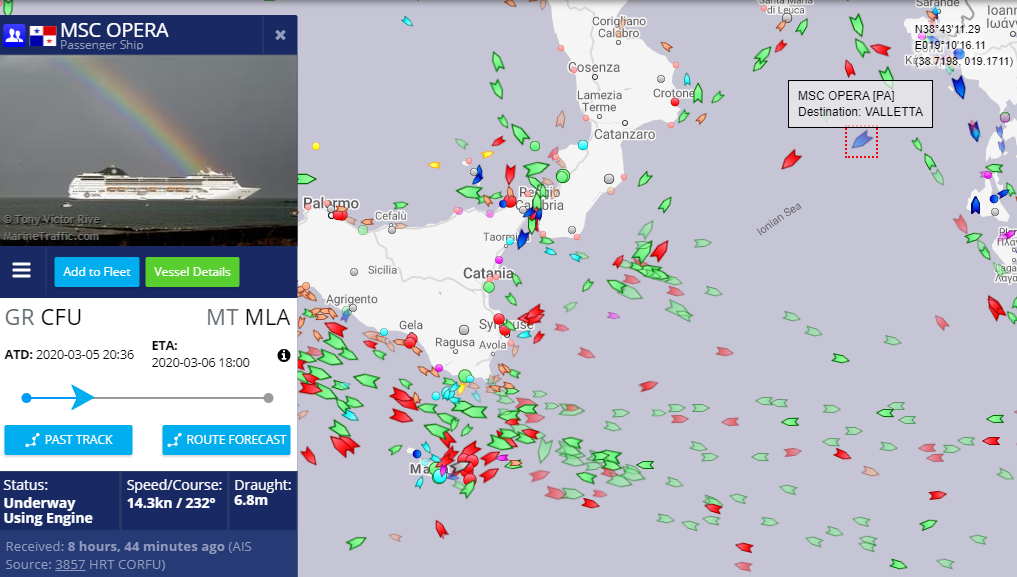 MSC Opera was due to arrive in Malta at 6pm. Photo: Marine Traffic

Balzan said that if vessel is allowed to disembark its thousands of passengers, it would be “highly irresponsible and the incident warrants an investigation.”

"If the vessel is allowed in, MAM will call for industrial action aimed at protecting patients and protecting the Maltese population."

The vessel had undergone a voluntary quarantine after a male Austrian tourist was later diagnosed with the coronavirus. He had disembarked from the vessel in Genoa on February 28 and was diagnosed four days later.

The Austrian health officials then alerted the cruise liner company and the Greek health authorities, about the patient. Whilst in the Piraeus port, the precaution was taken to conduct a voluntary quarantine of the vessel.

However, the ship has since docked in Corfu, Greece on Thursday and all its passengers were allowed to disembark, MSC Cruises said in a statement. 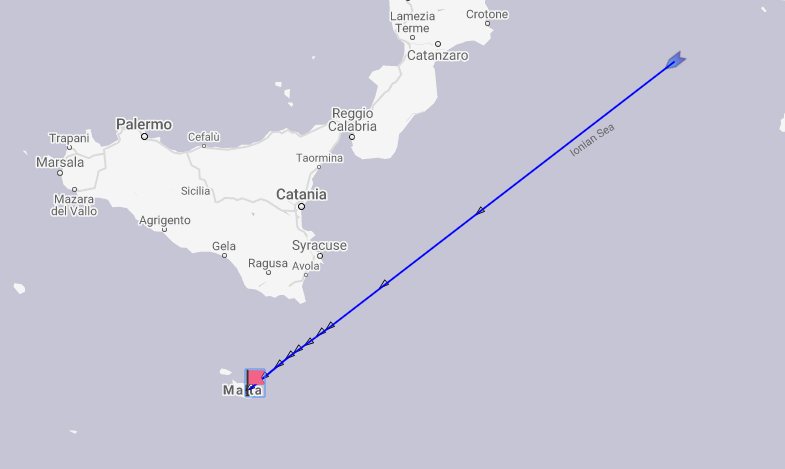 The previously planned route of the MSC Opera, according to ship tracker Marine Traffic.

It said that health officials in Corfu had boarded the ship and "deemed the vessel needed no further health measures beyond the ship’s existing strict preventatitve health measures."

Passengers and crew had remained on the ship for three hours while officials conducted a review of its medical records, it said.

"The check was to assess if any additional onboard health measures should be put in place following reports that a passenger who had disembarked the ship six days ago had tested positive for COVID-19  coronavirus two day after returning to Austria via Northern Italy," the statement continued.

"There is no reported illness today, nor yesterday, among any of the 2,302 passengers and crew."

'Superintendent was going to be overruled'

Unions representing nurses welcomed the government decision, although they said it confirmed that the decision by the Superintendent of Public Health to not allow the ship in to Malta was set to be overruled.

The Malta Union of Midwives and Nurses and UĦM Voice of the Workers both said that the decision was the right one and asked whether the government was still considering the possibility of allowing the MSC Opera to dock on Saturday instead.

"The statement that this ship presents no risk to the Maltese population has no scientific validity and represents grave irresponsibility of an unprecedented nature," they said.

Meanwhile, the nurses union has issued two directives for members working at Boffa hospital, saying workers there are not being told whether or not plans to use the hospital as an emergency ward for eventual coronavirus patients are true.

The Malta Union of Midwives and Nurses said that nurses working in the hospital's elderly and dermatology wards are to report to Mater Dei Hospital once all patients have been removed from the Boffa hospital, without tending to any COVID-19 patients.

What do you want to know about the coronavirus? Email us your questions and we’ll ask the experts: newsroom@timesofmalta.com