One in three people in Malta admitted exploiting personal connections to get access to a public service in the last year, according to a survey on attitudes to corruption.

The survey of 500 people was carried out between October and November last year as part of a European Union study on views and experiences of corruption by civil society organisation Transparency International.

• a quarter of people believe most or all business executives are corrupt;

• more than half fear there would be retaliation if they reported corruption;

• some 56% believe the government is doing a good job in fighting corruption.

Additionally, some 4% of respondents admitted to using a bribe to gain access to a public service, the highest share, at five per cent, having done so in relation to identity documents.

The study described the use of personal connections to access public services as a “worrying trend” across the EU, with 11 member states reporting even higher rates than Malta.

The Czech Republic had the largest percentage of people admitting using their contacts for public services (56%) while Estonia had the lowest rate at 12%.

“The EU is often seen as a bastion of integrity but these findings show that countries across the region remain vulnerable to the insidious effects of corruption,” Delia Ferreria Rubio, Chair of Transparency International, said.

“During a health crisis, using personal connections to access public services can be as damaging as paying bribes,” she said.

“Lives can be lost when connected people get a COVID-19 vaccine or medical treatment before those with more urgent needs.”

The survey also looked at other areas relating to corruption, such as the ties between business and politics. 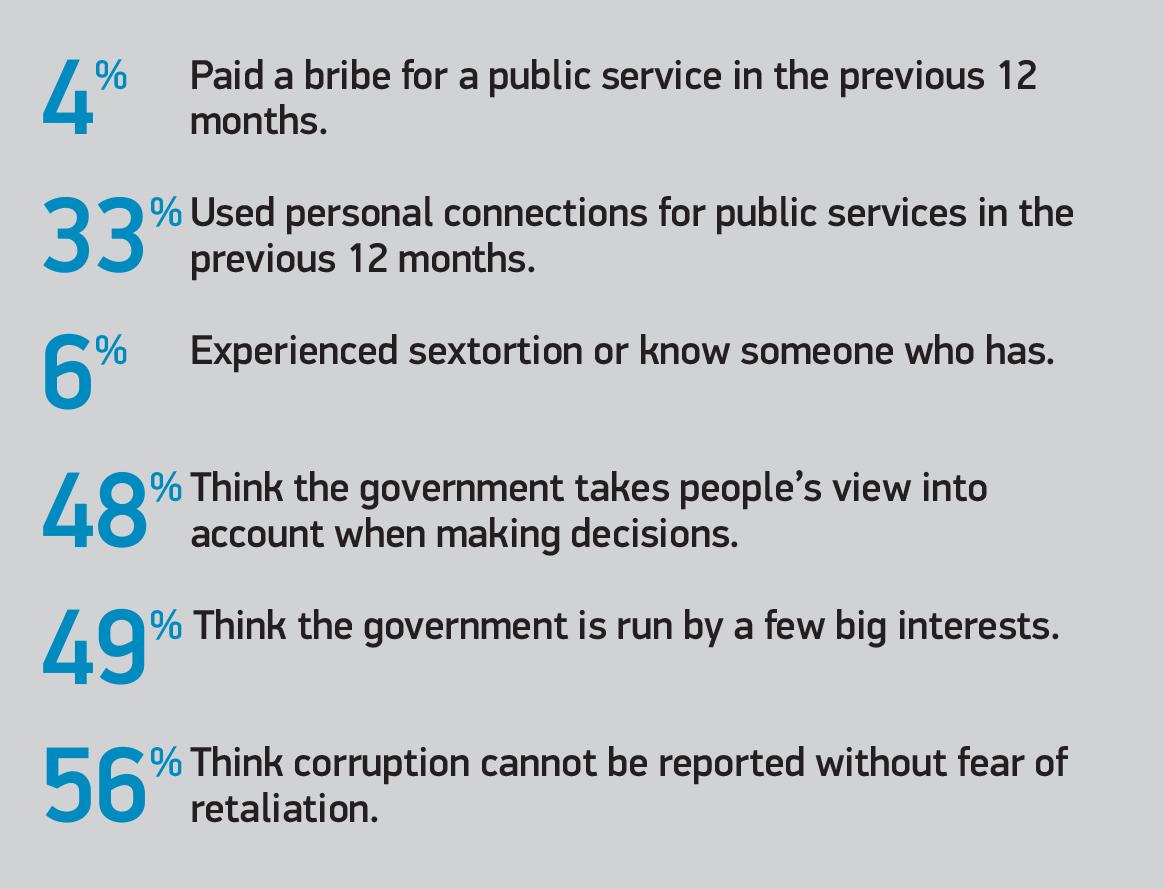 Just under half of all respondents in Malta agreed that the country was run by big business, a lower rate than the EU average (53%) despite revelations of political and business links to the murder of journalist Daphne Caruana Galizia.

However, respondents in Malta perceived business executives as more corrupt than any other institution.

Other institutions they thought were filled with people who were mostly or all corrupt were MPs (20% of respondents), the prime minister (17%), government officials (14%) and judges and magistrates (8%).

Meanwhile, few people thought there was corruption within local government (7%), the police (6%), bankers (4%) and the office of the president (2%).

Asked whether levels of corruption had changed in the previous 12 months, the majority said they had remained unchanged (39%) despite the government embarking on a range of rule of law reforms.

However, Malta’s respondents rated its government’s efforts higher than many other EU governments in tackling corruption, with more than half (56%) saying the government is doing well.

And the survey showed people in Malta felt more heard by the government when it came to making decisions (46%), compared to other European Union states, ranking third on this issue.

Survey respondents also showed that they were both positive about their own ability to fight corruption and fearful about the repercussions of doing so.

Most people (77%) thought that ordinary people can make a difference in the fight against corruption while Malta ranked eighth in the EU for fear of retaliation for reporting corruption.