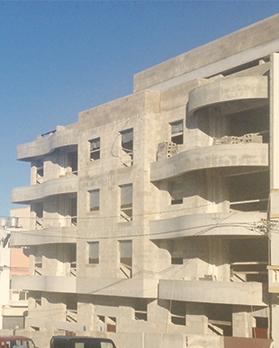 A building under construction owned by the man facing corruption allegations is the centre of a police investigation, Times of Malta has learnt.

Sources said the police economic crimes unit was sifting through hundreds of files and invoices that could shed more light on how a huge corner development in St Pius V Street, Rabat, was financed.

The building is owned by Edward Caruana who has been accused of corruption by the outgoing CEO of the Foundation for Tomorrow's Schools, Philip Rizzo.

Mr Caruana, who was recruited on a person-of-trust basis by Education Minister Evarist Bartolo and served as senior FTS official until a few weeks ago, denies the claims.

On Tuesday, Mr Bartolo tabled in Parliament a number of text messages and e-mails exchanged between him and Mr Rizzo. In an e-mail sent in September, Mr Rizzo told the minister that transferring Mr Caruana from the FTS head office to a branch in Mtarfa was “too little and too late”.

“Transferring Edward [Caruana] with same incredibly high remuneration package is worse than doing nothing at all. All Gozo knows what he is up to... someone is going to ask where from during the last 2 years Edward got c (circa) [€]400k to build a six apartment block in Rabat.

“Believe me, you're all playing with fire with highly flammable material all around in each FTS project's file,” Mr Rizzo wrote.

At this stage, nothing and nobody is being excluded but we have already found many smoking guns

The sources said it was suspected that some of the documents being analysed by the police could have been forged. It was possible that fake invoices, running into hundreds of thousands of euros, were issued to the FTS for supposedly infrastructural works at government schools, which funds could have then been used to finance part of the Rabat property, which was still unfinished, the sources added.

The police are also known to have spoken to contractors working on school projects to determine whether building material, including bricks, cement and tiles, among others, could have been diverted to the Rabat project.

"At this stage, nothing and nobody is being excluded but we have already found many smoking guns," police sources said.

"The investigation is currently focusing on Mr Caruana’s handling of the government projects while his private development was in progress. We are not excluding the possibility that other FTS and Education Ministry officials could have been involved or, at least, were aware of what was going on. The same applies to some contractors," the sources said.

Times of Malta is informed that works on the Rabat development started in the summer of 2015 and consisted of the demolition of Mr Caruana’s two-storey former residence and the building of six garages and an office, six large apartments and a large three-bedroomed penthouse. A semi-basement development required excavation in an area deemed to be of archaeological importance.

When completed, the development is estimated to have a market value of between €1.5 and €2 million.

Mr Caruana, who was always employed with the government, has served as Mr Bartolo’s chief canvasser on the Rabat district since 1992 and formed part of his private secretariat when Mr Bartolo was as minister in the Sant administration between 1996 and 1998.

Soon after Labour returned to power in 2013, Mr Bartolo appointed Mr Caruana as the person responsible for FTS infrastructural projects on a position of trust basis. At the same time, Mr Caruana’s brother, Joseph, was appointed permanent secretary at the Education Ministry.

Mr Rizzo, who resigned last week, has accused Mr Bartolo of trying to dissuade him from reporting irregularities allegedly committed by Mr Caruana. The minister admitted he had known about the allegations since April this year but waited until the end of August to start a proper investigation as he wanted “a smoking gun”. According to Mr Bartolo, as soon as he was told there was prima facie evidence that Mr Caruana was involved in wrongdoings, he ordered his transfer.

Mr Bartolo said he did not feel he should shoulder responsibility for Mr Caruana any longer since he took action and reported the matter to the police as soon as he had evidence of wrongdoing.

The minister told this newspaper on Monday there existed invoices for building material which was never delivered to school projects. When asked where had the material gone, he said he did not know.

At the time Mr Caruana started building his property in Rabat, a Gozitan contractor reported he had asked him for a €30,000 bribe in connection with works on the Gozo sixth form. Eventually, the police charged the contractor, Giovann Vella, with defaming Mr Caruana.