More than 60% of Maltese businesses raised their prices in the second quarter of this year, heaping further pressure on consumers dealing with a cost-of-living crisis.

The Central Bank of Malta described the development as "exceptional" and said it was the highest proportion of firms to raise their prices since its survey began last year.

It comes amid warnings from business leaders that they are facing spiralling costs that they fear will worsen in the coming months.

The percentage of firms that reported a rise in prices rose sharply to 63% between April to June, compared to 45% from the previous three months. Only 2% were able to drop their prices.

As expected, the surging price of raw materials was behind the price rise in almost all cases (91%), while higher transport costs were also an important factor in deciding to increase prices. 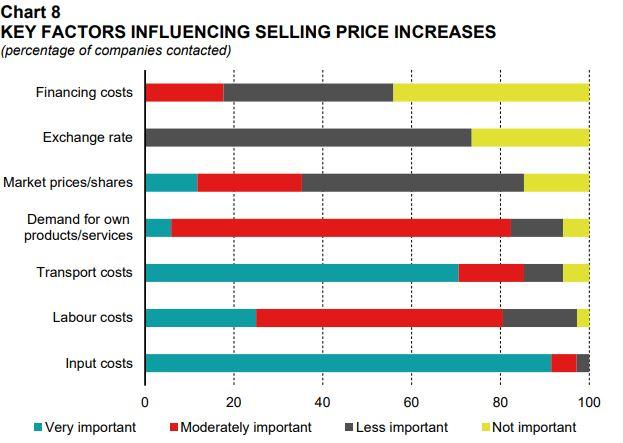 Raw materials, or 'input costs' are behind the price rises. Source: Central Bank of Malta

The increase in price rises was "most prominent" in the manufacturing sector, followed by the trade and construction and real estate sector, the report said.

A lower net share was observed in the services sector as half the companies increased selling prices while the remaining half kept prices unchanged.

Some 40% of businesses said they had increased their prices by 'a lot', while 23% said 'a little". No firm was able to significantly decrease its prices, of the 64 businesses interviewed.

Those who kept their prices unchanged did so either because their prices were already determined through long term contracts or through "sealed bid auctions" that forced them to absorb cost increases, the Bank said. 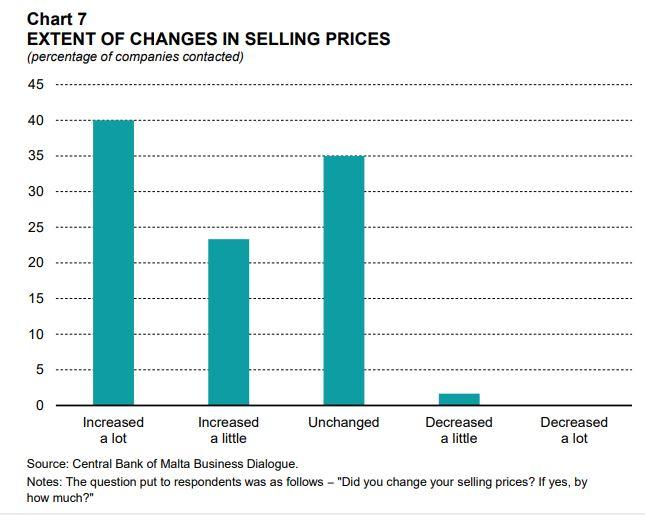 Four in ten companies who increased prices, said they have had to do so by 'a lot'. Source: Central Bank of Malta

Insights gathered from the contacts during the second quarter suggest that most companies were impacted by the war in Ukraine, mostly by higher import prices.

The central bank said 77% of businesses reported that their costs have increased.

In the second quarter, 92% of respondents to the central bank’s survey reported that investment plans continued as scheduled, up from 74% in the previous quarter.

At the same time, 42% of firms planned to hire staff, higher than 35% in the previous quarter.

In the second quarter of 2022, a total of 64 telephone/virtual meetings with leading non-financial corporations were conducted.

These include 17 manufacturing companies, 22 services-oriented companies, 14 wholesale and retail companies, and 11 construction and real estate companies, the central bank said.

Respondents reported an improvement in business conditions, with positive sentiment among firms hitting a high of 52%, up from 31% in the previous quarter.

During the quarter under review, 64% of firms stated that business conditions had improved over the past three months, up from 48% in the first quarter of the year.