In 2012, a walking and talking furry bear took the international movie box office by storm. Ted, as loud and lewd as he was cute and cuddly, cussed his way into audiences’ hearts, becoming the highest R-rated comedy of all time.

As predicted, here is the sequel, called Ted 2. And, while throughout the uneven plot there shine a couple of moments of comic genius, the filmmakers seem to have put as much effort into the plot as they did with the film’s title, relying on terribly low-brow humour to keep things going.

It is a shame for, in Ted, created and voiced by Seth MacFarlane, we have a character that is definitely fun and funny.

The work that has gone into creating him is a paradigm of some amazing and deceptively simple visual effects.

I wrote this when I reviewed the original Ted and I will reiterate it – like his less troublemaking Peruvian counterpart Paddington, you believe at all times that this is a living, breathing, bear that walks, talks, dances, reads and drives (disastrously, as it happens) and at all times he comes across as a person – a very short and furry one, but a person nonetheless.

And that is the premise of the story. It’s not long after his marriage to Tami-Lynn (Jessica Barth) that the couple start facing problems and decide to have a child as a means of rediscovering their love, but the state refuses to allow them to adopt as Ted is not technically a person. And so, with the help of his best friend John (Mark Wahlberg) and newbie lawyer Samantha (Amanda Seyfried), Ted goes to court to establish his status once and for all. 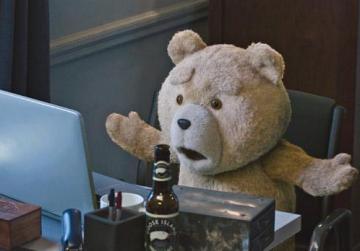 MacFarlane, who also wrote the script and directs, is a comedian known of course for his brand of boundary-pushing humour... a sense of humour that can be rather hit-and-miss.

Highs include Family Guy, the long-running, award winning adult animated TV sitcom; while lows include his ill-advised, greatly misfiring song We Saw Your Boobs, which he performed at the Oscar ceremony he hosted a couple of years ago. As he did with the latter, here he teeters on the very fine line between politically incorrect humour and bad taste throughout, adding a whiff of unpleasantness – which certainly wasn’t present in the first movie where, despite Ted and John’s puerile sexual humour and drug-fuelled shenanigans, you grew to care for them.

The rather appalling racist humour – and a fixation on the black male sex organ – just doesn’t sit well.

Neither do the many of the other jokes targeting gays and women, who are also the butt of many unwitty digs. I suppose if you want to be offensive for the sake of it, go ahead. But at least make it funny.

The film also tries to strike a meaningful chord using Ted’s case as a call to arms in the fight for civil rights – as represented by Samantha’s heartfelt courtroom presentations and the appearance of Morgan Freeman as a top civil rights lawyer. Yet, these changes in tone from crassness to earnestness don’t work.

As before, Wahlberg shares some truly genuine chemistry with his fuzzy friend and is happy to play second fiddle, since Ted seems to have more screen time.

Amanda Seyfried’s Samantha is engaging enough and even gets to sing (in the second of two rather incongruous musical moments – Samantha’s song, a ballad with some cute animals brought in as extras; and an elaborate opening song-and-dance number starring Ted and a large chorus straight out of a Busby Berkeley routine).

Giovanni Ribisi is back as the slightly deranged fan planning on kidnapping Ted – a subplot as pointless as it was in the first film.

There are a couple of genuinely funny gags – John and Ted singing to the opening credits of TV fixture Law and Order is truly funny.

A cameo by Liam Neeson involving a box of cereal provides a rather surreal moment.

But these do little to lift the film out of the humdrum depths it falls to, serving only underscore how truly funny this could have been had the film-makers not relied on their usual bag of crass and coarse tricks.