Malta's economy will be "severely affected" by the coronavirus pandemic this year but the impact will be less than the EU average, according to the European Commission's Spring forecast.

In its estimate, the commission said Malta’s economy, which had "already shown signs of cooling" before the pandemic would contract by 5.8 per cent in 2020, but should rebound by 6 per cent the following year.

The impact is below the average for the eurozone, which is forecast to contract by 7.7 per cent.

The Commission's forecast of a 5.8 per cent dip for Malta is marginally more pessimistic than the government's own projections, which are for a 5.4 per cent dip, and in line with rating agency Fitch's prediction of a 5.9 per cent contraction.

"Private consumption and trade are projected to take a significant hit,
while increased public spending should partially mitigate the effects of the recession."

It said employment is likely to "decline temporarily" and unemployment to increase.

"After several years in surplus, the general government balance is expected to slip into deficit and public debt to rise, as the government takes fiscal measures to offset the crisis."

The Commission's report said the closure of non-essential businesses since March 26 was "weighing on" private consumption and service exports.

But it forecast that households's high saving rate and large-scale investment projects in health and infrastructure could cushion the crisis' impact. 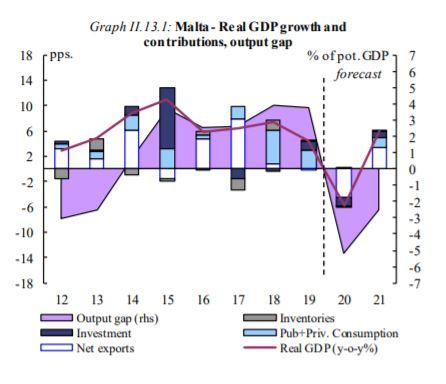 The European Commission forecasts the impact of coronavirus on Malta.

An ease on restrictions would also re-stimulate domestic demand in 2021, it said but it warned that Malta's economy relied on the wider global picture.

"As a small open economy, Malta’s economic outlook is highly sensitive to global uncertainties  and the growth performance of its trading partners.

"Their economic development in the wake of the COVID-19 pandemic may weigh on Malta’s exports and pace of recovery more strongly than
assumed in this forecast."

Tourism to have 'harsh impact' on unemployment

In terms of unemployment, the Commission is expecting Malta’s rate to increase from a "record low" of 3.5 per cent in 2019 to "around 6 per cent" in 2020. This is despite the financial aid being made available to employees and
the government’s measures to cushion the impact.

It points to the temporary closure of tourism-related activities as being set to have a "harsh impact on employment".

However, in 2021 unemployment in Malta is forecast to decrease to 4.4 per cent. The government said this was significantly below the country’s annual overall average since the country’s EU accession, which stands at 6.6 per cent.

As for next year the commission is forecasting that job creation in Malta will increase by 3 per cent, which is almost twice as much the losses registered in 2020.

This equates to double the job creation figure registered since 2015, the government said.

According to the commission’s forecast the government’s debt-to-GDP ratio is set to "surge" to 51. per cent and "remain around this level" next year. This is slightly above the level for 2017, the government said.

In response, the government said that the fiscal measures, the resilience of Maltese businesses, the bank’s prudential approach and the household savings would be crucial for the country to recover from the COVID-19 outbreak.

Greece is expected to be the worst-hit country by the pandemic with a contraction of 9.7 per cent in GDP, while Italy, Spain, and Croatia will also register contractions exceeding 9 per cent.

While Poland is the only country where the respective forecast is below 5%, Germany’s economy will shrink by 6.5%, which is almost one percentage point more than Malta, the government said.