It was unfair for Prime Minister Robert Abela to blame migrants for the spike of COVID-19 cases, the Medical Association of Malta said on Tuesday.

Reacting to comments made by Abela in a One TV interview, the doctors’ union said the government’s decision to allow mass events like parties, despite the expert advice of the superintendent for public health, was the only cause of this spike since migrants have been quarantined immediately.

“In fact, the European Centre for Disease Control data does not include migrant data,” the association said.

It enclosed the graphic showing a clear spike in the last two weeks following the organisation of mass events. 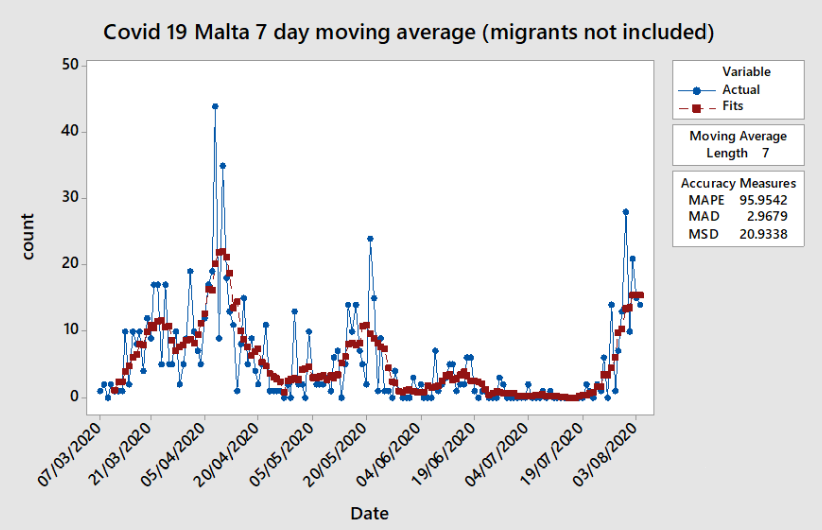 The union (and the nurses’ union) last week threatened industrial action unless the government took action to stop mass events. The action was suspended after talks with Health Minister Chris Fearne even though the MAM described government action so far as ‘too little, too late’.

The government last week revealed plans to quarantine migrants with coronavirus at sea and issued a call for the provision of suitable vessels. Some 88 migrants have tested positive so far. They arrived in two groups last week.

Health authorities initially failed to include migrants in the country’s official COVID-19 figures, giving no explanation.

But from Friday, the numbers were included following advice from the European Centre for Disease Control.

In his comments to One TV, the prime minister said he disagreed with attributing the surge in new cases to mass events, as just under half of the numbers were rescued migrants who were being kept in isolation and did not mix within the community.

The NGO Repubblika said in a separate statement that it was concerned by the prime minister’s statement blaming migrants for the spike.

“On most days, the increase of people testing positive is generally due to people who have contracted the disease locally from persons who were circulating freely. Newly arriving migrants rescued at sea do not circulate freely and therefore pose little risk of further transmission,” it said.

“The number of ‘total cases’ of COVID-19 includes migrants rescued at sea that have tested positive. But these patients are immediately isolated and have contributed nothing at all to the spread of the disease locally.

“By laying the blame on them, the prime minister risks inciting racial prejudice.”

The NGO observed that none of the migrants were at the Santa Venera feast, or at the Radisson Hotel party, or in Paceville nightclubs or in the other mass gatherings that have been recorded by the government’s contact tracing as the sources of infection for clusters of COVID-19 patients.

“This means that the local spread of COVID-19 is not a result of migrants rescued at sea. It is a result of the policies of Prime Minister Robert Abela who has re-opened Malta to travel from points of origin (like the UK, France and Spain) where COVID-19 numbers are rising again, and has permitted parties, festas, night clubs and mass gatherings at the same time.

“It now seems that as a result of these policies, the government has lost control of the COVID-19 situation. To rein it back in, the government may need to prepare the public for punitive restrictions which it would not want to be blamed for. The restrictions that may need to be introduced may have a devastating impact on our economy, the education of our children and our way of life, and could have been at least in part avoided had the government not rushed to open up prematurely the country to inbound travel and mass gatherings and parties,“ it added.

Chamber of Pharmacists calls for agreement with the MAM

The Chamber of Pharmacists said it condemned the belittling of the MAM, by the prime minister.

It said it was also ‘flabbergasted’ at the stance adopted by the prime minister and the tourism minister, whilst playing with the lives of the population especially the most vulnerable ones, the front liners and others.

The chamber called for a credible agreement with the MAM so that the country could revert to the position two weeks ago when it had no new COVID-19 cases.