One of the leading producers of COVID-19 testing kits used Malta to dodge millions in taxes, a new report has found.

According to the Centre for Research on Multinational Corporations, biotech giant Qiagen used a network of offshore structures, including Malta, to "aggressively avoid taxes at the expense of the general public".

Qiagen is one of the leading producers of COVID-19 testing kits and has seen its profits shoot up since the start of the pandemic.

The Dutch research centre found that although Qiagen is originally a German company and its operational headquarters are located in Germany, it had registered its parent company in the Netherlands.

The firm then used inter-company loans from the Netherlands to its subsidiaries in "European tax havens Malta, Ireland and Luxembourg" to avoid corporate income tax back in Holland.

How much tax did Qiagen avoid?

Based on an in-depth investigation of two alleged tax avoidance structures used by Qiagen, the research centre estimates the company has accumulated illegitimate tax credits and avoided Dutch corporate income tax to the tune of €142 million.

In the first of two cases explored in the report, Qiagen took advantage of legal mismatches between the United States and Luxembourg, and Luxembourg and Ireland, to avoid approximately €93 million in Dutch income tax between 2010 and 2018.

In the second case, Qiagen set up an intercompany loan structure in Luxembourg and Malta, which enabled the company to accumulate up to €49 million in illegitimate tax credits.

These allegedly bogus loans were described as "a financial merry-go-round of debt and interest” designed to help the big-pharma firm avoid millions in taxes.

The European Commission is currently investigating whether the use of this technique by other companies constitutes illegal state aid.

How did the tax-dodging work? 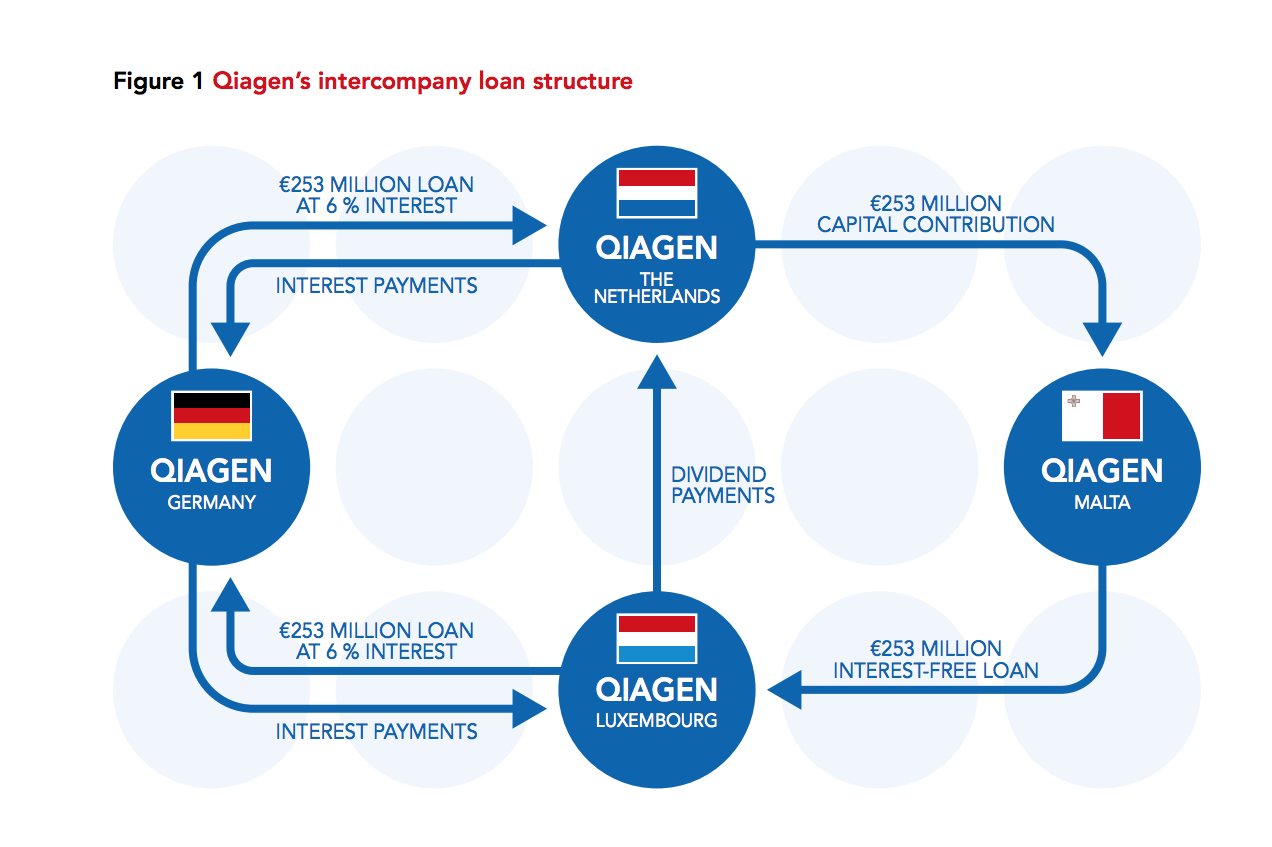 According to the research, in 2011 and 2014, Qiagen’s Dutch parent company, Qiagen N.V., made two large capital contributions into a Qiagen subsidiary in Malta to the tune of €253 million and €138.4 million respectively.

This Maltese subsidiary, Qiagen Finance (Malta) Limited,  referred to as ‘Qiagen Malta’ in the research, is a letterbox company managed by trust and corporate service provider Vistra, which has offices in various tax havens and secrecy jurisdictions across the globe.

This Luxembourg subsidiary is also a letterbox company set up by Qiagen and managed by another trust and corporate service provider, FIDCOMA.

Qiagen Luxembourg then took the two interest-free loans it received from Malta and on the same day loaned them onwards to Qiagen’s German holding company, Qiagen Deutschland Holding GmbH, referred to as ‘Qiagen Germany’ but with added interest of 6% and 4.54% respectively.

These loans were not used by Qiagen N.V. to finance research and development or other business activities. No money was actually loaned to provide capital to finance Qiagen’s operational subsidiaries.

"The only purpose of this loan appears to have been to generate interest payments in the Netherlands in order to erode Qiagen’s Dutch tax base," the report said.

Malta and Luxembourg are ranked by the Tax Justice Network’s Corporate Tax Haven Index as the 23rd and 6th worst corporate tax havens in the world.