The tourism and culture ministries on Tuesday played down their Valletta Christmas events programme after a stinging rebuke by the doctors union and healthcare professionals.

The programme was announced at a press conference on Monday by ministers José Herrera and Julia Farrugia Portelli and Valletta cultural agency head Jason Micallef. Along with the events, they also announced free parking for Black Friday, the popular shopping days of December 8 and 13 and from December 19 until January 1.

The Malta Medical Association in a statement early on Tuesday hit out at at the plans, accusing the government of irresponsibility because of the COVID-19 pandemic.

The association, which represents doctors, said the prime minister and Tourism Minister Julia Farrugia Portelli were "in denial", deliberately ignoring scientific advice and playing the populism card while death and disease from COVID-19 are reaching record heights.

"It appears that for Minister Farrugia that the July parties were the test tube, and Christmas is going to be the real thing in fomenting an unprecedented epidemic. It is no wonder that 'fake enforcement' has been taken away from the police and put under her responsibility," the association said. It was referring to big hotel parties which were widely blamed for a return of COVID-19 after it had been suppressed in the summer.

It appears that for Minister Farrugia that the July parties were the test tube, and Christmas is going to be real thing in fomenting an unprecedented epidemic.

The MAM observed that 81 people have died of the virus and there are 80 very seriously ill patients at Mater Dei, of whom 12 are in intensive care.

"The daily 7-day average is now at 137 new cases per day, with 7,283 total cases. Based on the recorded 1.5% fatality at least another 35 deaths are expected to occur by the end of the month. Despite these deaths, the worst is still to come and if the daily average remains above a hundred; the healthcare system may soon collapse," the association warned. 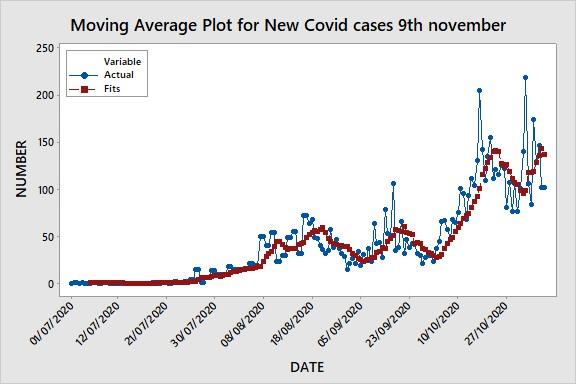 A data chart issued by the MAM.

"While doctors and other healthcare workers have to risk their own health on a daily basis, the prime minister has ruled out any form of lockdown, while Minister Julia Farrugia now has new mechanisms in place to ask the whole Maltese population to ignore the advice of the Health Minister and (Public Health Superintendent) Prof. Gauci, and go out and have fun during Christmas.

"This is highly irresponsible and puts the lives of many patients and healthcare staff unnecessarily at risk. COVID-19 will not kill Christmas but will kill more vulnerable Maltese people," the MAM said.

The Malta Environmental Health Officers' Association also hit out at the announcement of the Christmas and the City Programme.

"Days after Health Minister Chris Fearne was reported as saying that COVID positive cases are expected to increase, the tourism minister informed the public that the Christmas in the City event will go ahead. This shows that instead of pulling at the same rope to control the spread of COVID-19, every entity is working on its own," the association said.

Instead of pulling at the same rope to control the spread of COVID-19, every entity is working on its own

The handling of the pandemic could not be taken lightly, the association said. It was true that life had to go on and people had to learn to live with COVID-19, but it was premature to take these kind of decisions.

People should not be considered as numbers, and human resources fighting the pandemic should not continue to be drained, the association said. Health has to come first.

In a reaction, the ministries for tourism and for culture said the usual large activities held over Christmas would not be held this year owing to the pandemic.

Major events such as ‘Winter Wonderland’ have been cancelled.

Contrary to what some people had claimed, it was not true that parties or entertainment events would be held in Valletta or elsewhere, they said.

As explained in the press conference on Monday, the Valletta Cultural Agency would decorate the main streets, light the Christmas tree, set up the crib and project light decorations on the facades of the buildings in St George Square, the ministries said.

The idea was that through music, small choirs and performing arts, families who choose to go to Valletta for shopping or to eat out could enjoy the Christmas spirit.

The events had been organised in consultation with the health authorities and would ‘absolutely conform’ with health directives, the ministries said. All visitors have to wear masks and observe social distance.

In their press release on Monday, the ministries had said that despite restrictions in the choice of events, the Valletta Cultural Agency’s Christmas in the City programme includes performing arts, street theatre, music and Christmas choirs. Small and medium events will be several places including Pjazza de Valette, Freedom Square, Republic Street, Great Siege Square, St George’s Square, is-Suq and Strada Stretta.

“At this time, we want to keep the Christmas spirit alive while continuing to help and support the local industry. We believe that this balance can be achieved through an ongoing economic activity even when it comes to Christmas shopping, while people keep following the necessary precautions,” Minister Julia Farrugia Portelli was quoted as saying in the ministerial statement.

The Health Ministry said later that the clarification issued by the ministries for tourism and culture "is self-explanatory".

"Any events organised will adhere to the health authorities' protocols."