The COVID-19 infection rate among people aged 80 and over in Malta is higher than in the younger age groups for the first time in months.

The infection rate among the older generation has been climbing steadily since July but has shot up in recent weeks. This confirms the authorities’ concern that immunity from the vaccine in the elderly – who were among the first groups to get the jab in January – has started to wane.

The data, from the European Centre for Disease Prevention and Control (ECDC), is for the two weeks ending September 5.

At the end of May, no patients infected with COVID-19 were aged over 80.

Earlier this month, the health authorities decided to bring forward the administration of vaccine booster doses to residents in homes for the elderly after two clusters were detected in two homes.

Since then, a third cluster has been traced at St Vincent De Paul Residence.

All residents in care homes for the elderly have now received their booster dose, according to the government. In the coming weeks, the campaign for third vaccine doses will be expanded to the immunocompromised and those aged 70 and over.

In contrast with the elderly population, the latest data show that while the infection rate among those aged 25 to 49 peaked at 435.3 per 100,000 in mid-July, it has been on a downward trend since.

Over previous months, this cohort had the highest rate of infection but it is now the lowest it has been since the end of June. 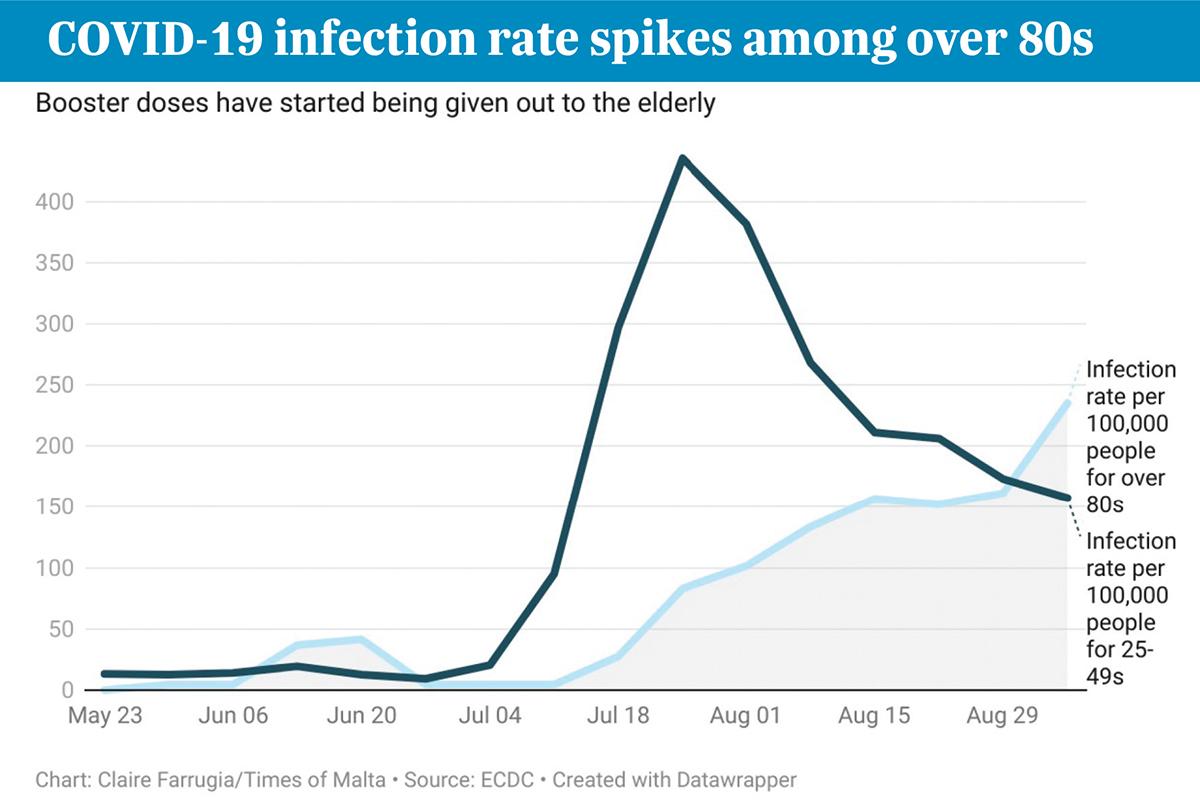 This age group was offered the vaccine well after the elderly had received theirs. The infection rates among the other age groups – under 15s, 15 to 24, 50 to 64 and 65 to 79 – have also been going down over the past few weeks. This means only those 80 and over have registered a spike in infections.

Despite this increase, the hospitalisation rate has been on a downward trend for weeks and currently stands at 1.2 patients per 10,000 people.

The death rate has also steadied and has been constant at 17.5 for three weeks.  The EU agency does not provide a breakdown of hospitalisation by age.

Contacted on the matter, the Health Ministry said: “At present, the ages of those receiving care at Mater Dei Hospital range between 32 and 99 years.”

Epidemiologist Neville Calleja said it was clear that the changing trend was the result of waning immunity.

The immune response in the elderly – the first to be given the jab – has become weaker, he said.

A similar trend has been seen in countries like Israel, which has also been giving out booster doses.

Calleja said the impact of the booster should be seen over the next few weeks as the third jab is expected to take effect sooner than with the first doses.

Calleja also noted that, just like all age groups, the elderly are now experiencing pandemic fatigue and are more likely to be relaxed over taking precautions.

It was crucial, therefore, to remind them that they too needed to be mindful of their behaviour, especially because they were the first to get the jab and their immunity might be wearing off, he said.

Looking ahead, Calleja said that it was now crucial to see how long it would take for the immunity in the younger groups to wane and whether it would last longer because their response to the virus vaccine is stronger.