A large crowd of anti-lockdown protesters and vaccine sceptics made their way through Valletta on Saturday morning to protest against public health restrictions aimed at keeping the COVID-19 pandemic in check.

Protesters, many not wearing masks, demanded an end to ongoing pandemic rules which they said were curbing their individual freedoms.

Their demands ran through a gamut of issues: from outright opposition to COVID-19 vaccines to complaints about contradictory pandemic rules and concerns about individual rights being infringed.

The event was part of a worldwide anti-COVID movement that saw similar protests in other capital cities across the world.

Activists held up placards calling for an end to “COVID tyranny” and a stop to “mandatory vaccination”. COVID-19 vaccination is not mandatory in Malta.

Many refused to speak to a Times of Malta reporter, saying the media was “fake” and "part of the system".

The group marched through Valletta, stopping outside St John’s co-Cathedral at the Prime Minister's office at Castille and eventually made its way to parliament square.

More than 82 per cent of adults in Malta are fully vaccinated, with around 86 per cent having received an initial dose.

While virus cases have risen in the past weeks, fewer than one per cent of patients have required hospital treatment, unlike previous periods in the pandemic when healthcare systems reached a breaking point.

The HHA - an organisation that describes itself as being dedicated to "inform and educate the public in general about matters concerning their physical and mental well-being" - was the lead organiser behind Saturday's protest march.

It said that it had withdrawn from Saturday’s protest as a result of its failure to obtain a permit but would be filing a constitutional case against the police commissioner over the failure to issue a permit.

The right to assemble is a fundamental right guaranteed by article 42 of Malta’s constitution, although the constitution notes that the right can be restricted on public health grounds that are “reasonably required”.

Activists at Saturday's gathering chanted “no vaccine”, “libertà”, “my body, my choice” and “no vaccine for children”.

“We are calling on our Prime Minister Robert Abela, Health Minister Chris Fearne and Superintendent Charmaine Gauci to hear us,” one speaker said, as the crowd booed continuously when their names were mentioned.

One woman who wished to remain anonymous said that while she thinks the mask might help to reduce the spread of the virus, she was protesting because of the inconsistent measures around the vaccine. 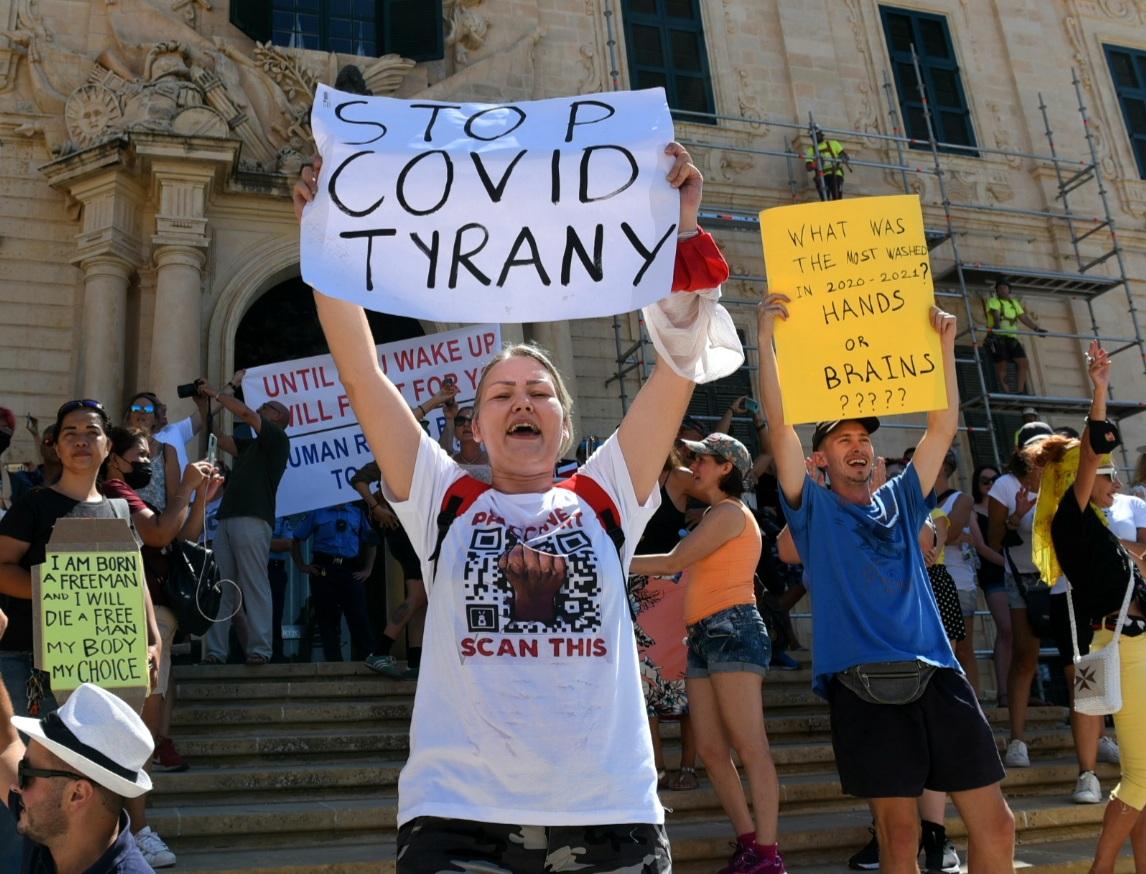 “One moment we can travel without the vaccine, but the next it is needed. One moment we take PCR tests, the next moment those vaccinated do not need to take such tests, even though they can still be carrying the virus.

"Is this not discriminatory against those people who do not or cannot be vaccinated?” she asked.

Other speakers described the situation as a ‘medical dictatorship’, and that the government tried to control people and their freedom.

“We need to stand up, leave people to choice, and especially not vaccinate children. Parents should decide whether children should be vaccinated or not,” another speaker said to the cheering crowd.

'Not even on Filfla'

No politicians were present for the protest, though the leader of the recently-launched right-wing Popular Party, Paul Salamone, made an appearance and spoke to the crowd.

Jo Meli, who wore a mask with a badge “not vaccinated” written in Dutch, told Times of Malta that he will not take the vaccine, even if he is “forced to exile in Filfla”.

“It is my decision whether I should take the vaccine or not, and I will not be forced to take it,” he said. 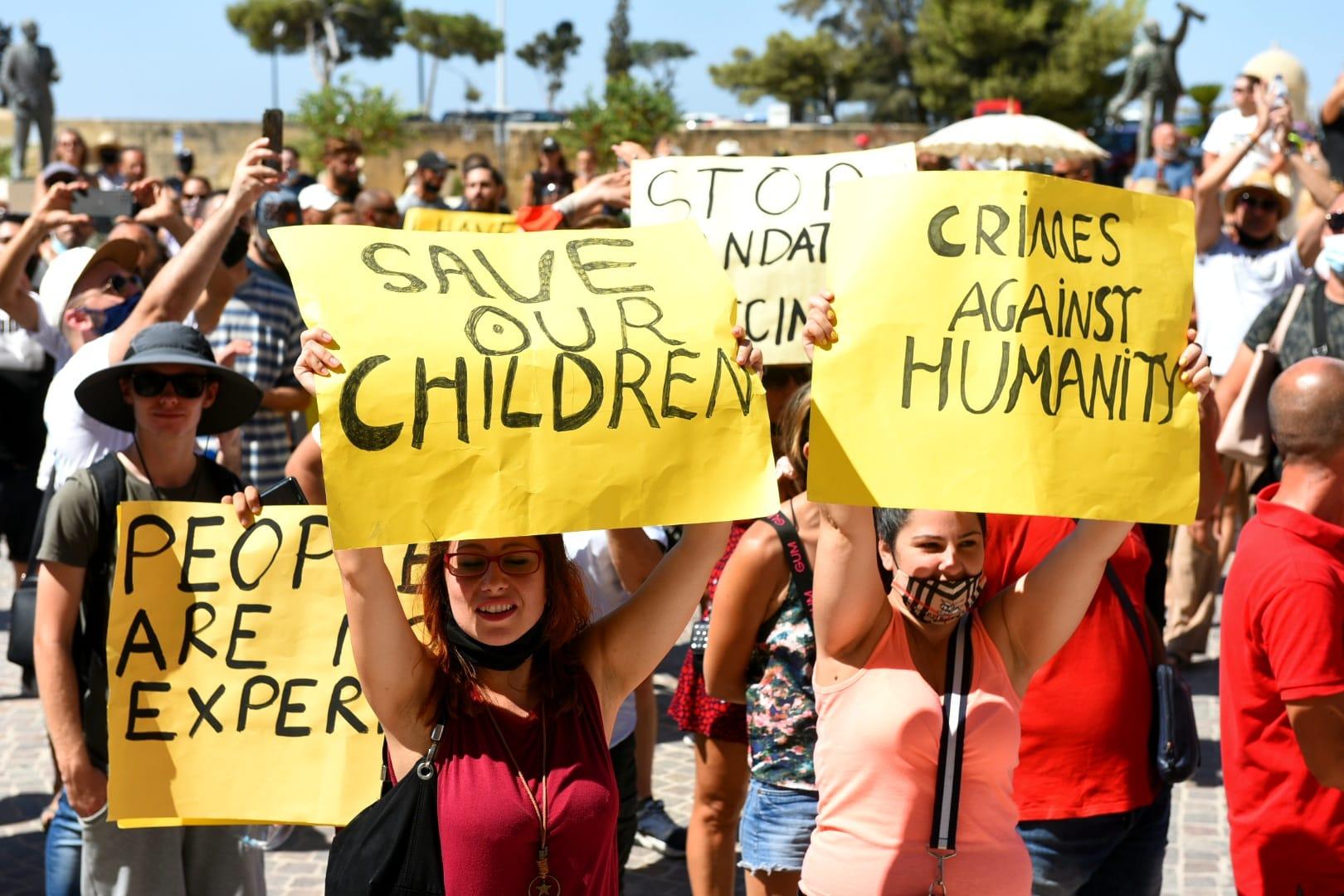 'I would speak to you if you were human'

“I would speak to you if you were human and one of us,” one protester told a journalist.

Another man said that he felt that people were being blackmailed into getting vaccinated.

According to current health rules, unvaccinated Maltese residents returning from overseas can quarantine at home, provided they obtain written permission to do so beforehand by emailing health authorities at covid19.vetting@gov.mt. 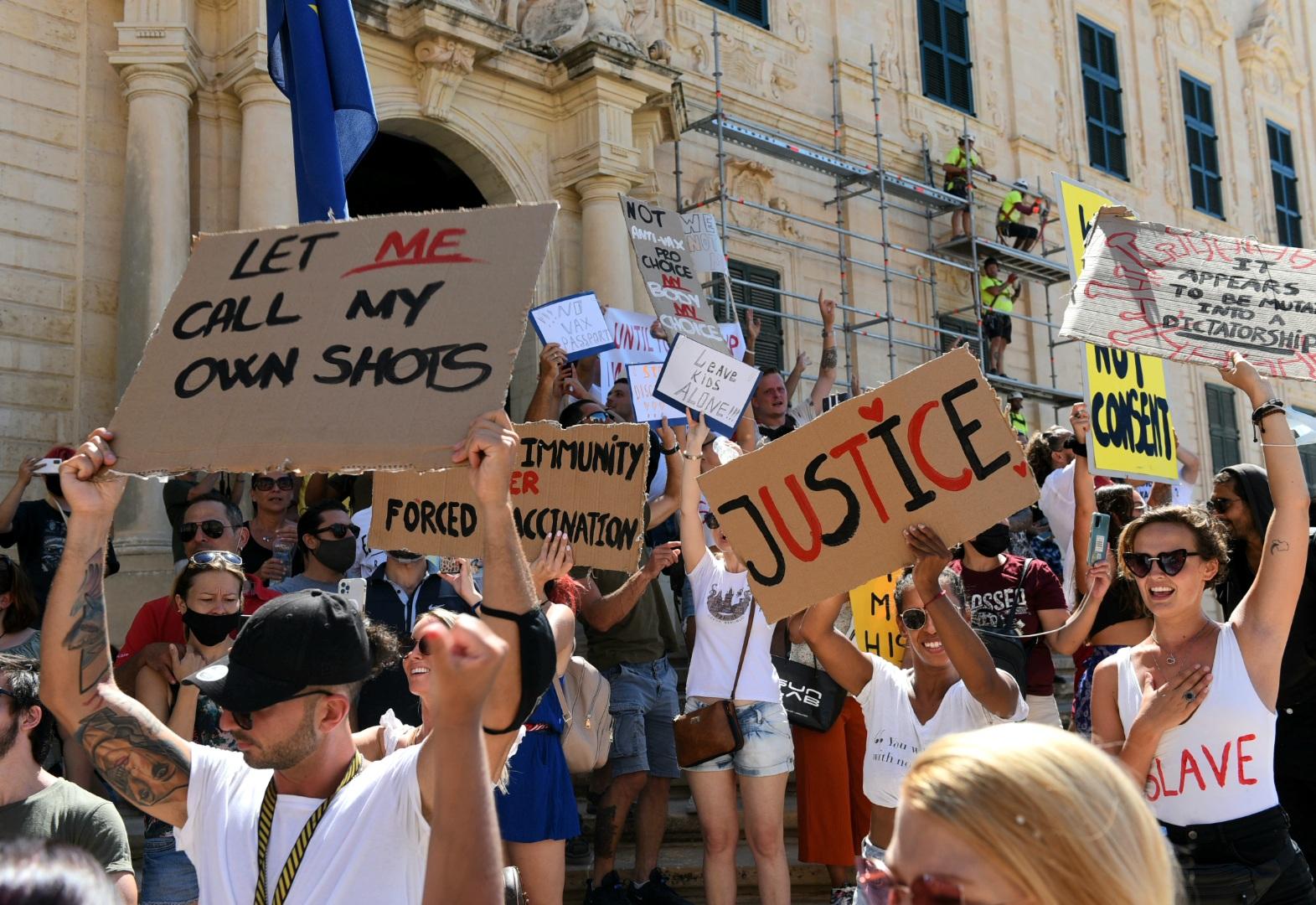 At least one organiser veered the event into the realm of conspiracy theory, claiming that COVID-19 vaccines were “experimental” and that “millions have been seriously injured” by them. 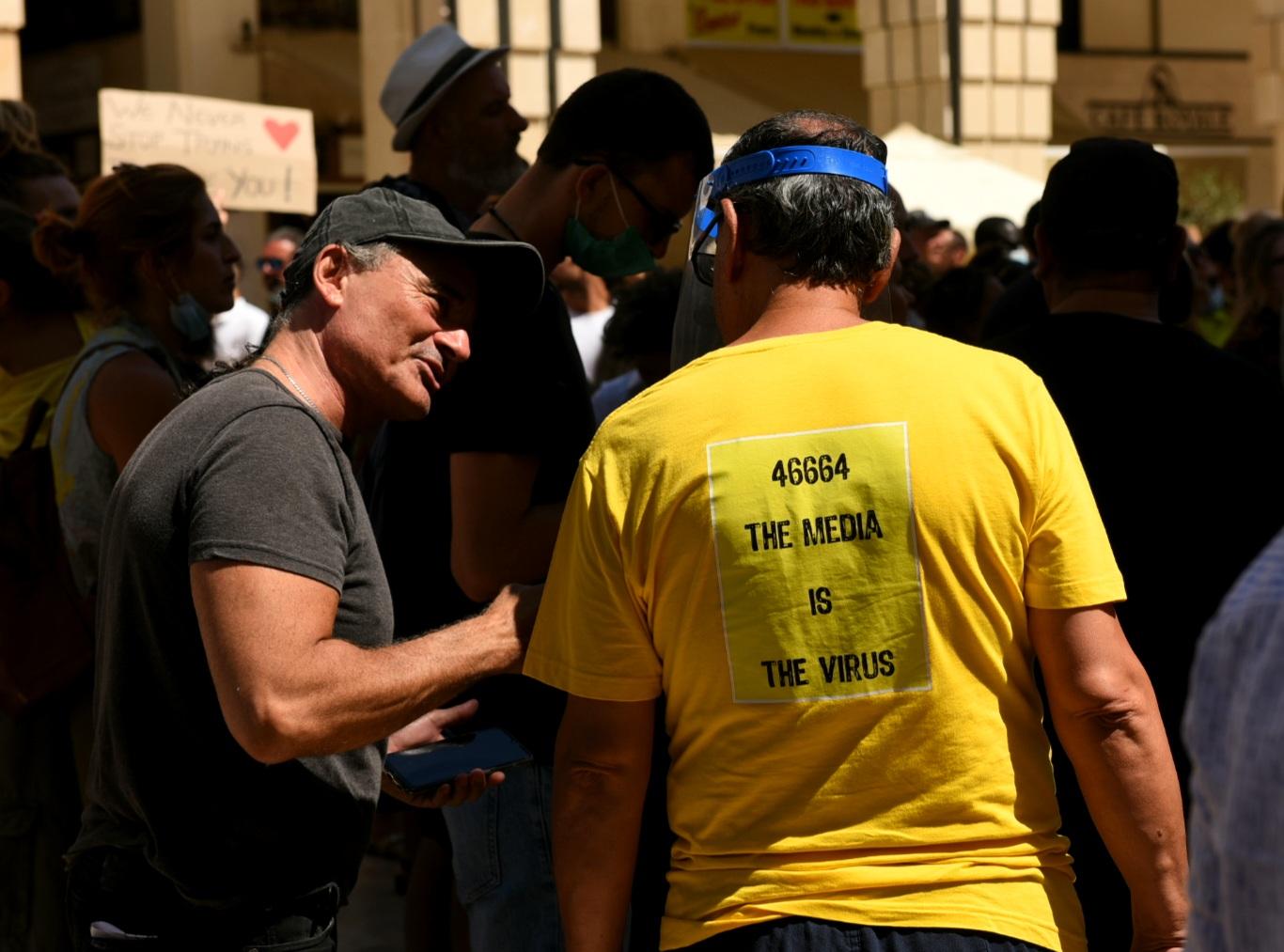 While medical professionals and regulators acknowledge that there are rare instances of adverse reactions to vaccination, they also note that those risks are far outweighed by the benefits inoculation provides.

Conspiracy theories surrounding the COVID-19 vaccine are the latest in a long string of false anti-vaccination claims that range from claims that the MMR vaccine causes autism to theories about vaccines being used to implant microchips in people.

A recent report by a US thinktank found that around 65 per cent of anti-vaccine misinformation on social media stemmed from just 12 accounts that regularly peddle false information.