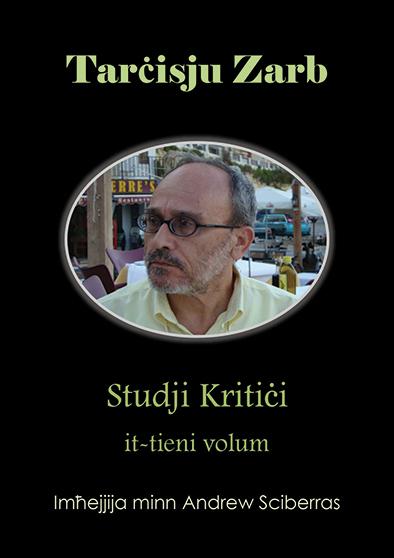 As I have affirmed in my first review of his first volume of his critical studies, Tarċisju Zarb is one of Malta’s most prolific poets. He is a worthy author, academician, essayist and teacher whose highly philosophical views of life reflect a very deep and almost painful preoccupation with what is actually going on in a world that is tragically succumbing to chaos.

And like all poets, he is still hoping for better days, with more colourful undertones of cynicism that sometimes sound more pronounced and desperate than hopeful.

Earlier in 2020, Zarb has enhanced Maltese literature with his first volume of critical studies that not only were academical gems but also reflected the genuine interest that Zarb has, not only in local literature in general, but in other Maltese poets and writers.

He does so by looking at all of them individually, assessing their worth, their poetic prowess, their styles, their character and, most importantly, their varied reactions in the face of adversity, disenchantment and, ultimately, utter inevitable disillusions. Now Zarb has further regaled our literature with this second volume of critical studies, once again collected and edited by Andrew Sciberras.

It is another monumental thick tome, beautifully printed by Progress Press, with coloured illustrations that further enhance the very neat and artistic presentation of the book itself.

The book opens with information about the author and is followed by a long, highly academic introduction by the author himself in which he analyses literary criticism in all is most salient points and forms.

In this second collection of critical studies, Zarb has analysed 12 other poets/authors and, once again, he does so in a supremely academic manner and with a very critical eye that, in an astonishing way, is purely individual.

We see this not only in the way he treats each poet/author as a persona, but also in the almost psychological bravura with which he relates each poet/author with his literary works, to thus bring into focus feelings, moods and characteristics – artistically the same, personally different, and utterly human! And it is exactly this human element that once again makes this monumental work a joy to read and a pleasure to own.

All the above-mentioned poets/authors, like those treated in the first volume of these critical studies, have contributed in their own way towards the overall formation and enhancement of the literature of Malta, raising it to levels of literature that need not envy those of other, much larger countries.

Sciberras is once again to be heartily congratulated for the way this collection has been formed and ultimately presented.

Artistic books such as these deserve all the attention and respect they can get, all that is nationally due to them, as they not only enrich Maltese literature further, but also provide further generations with valuable information about those who have strived, very often with lots of personal sacrifices, to furnish these tiny islands with a literature of its own, complementing a rich language of its own!