Some 300 people gathering in St Julian's near the Love Monument this evening in a sombre vigil after yesterday's massacre at the offices of the satirical magazine Charlie Hebdo in Paris.

The gathering, organised by the French community was also aimed at reinforcing the commitment to free speech. 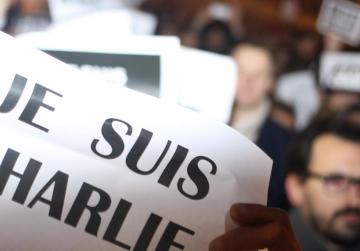 Those present included Prime Minister Joseph Muscat and Opposition leader Simon Busuttil, MPs from both sides of the house, Maltese and foreign diplomats and people of all ages.

Some participants carried placards reading Je Suis Charlie (I am Charlie) or held aloft candles and pens, symbols of freedom.

French Charge' d'Affairs Frederick Petris thanked those present saying this was an expression of their belief in freedom of expression and solidarity with the victims.

There was a relatively strong police presence, following suggestions on social media by an anti-immigration group that they too might hold a demonstration or hijack this one.

France is holding a day of mourning for the journalists and police officers shot dead yesterday morning by black-hooded gunmen who stormed the offices of the weekly satirical magazine renowned for lampooning radical Islam.