Have you ever thought about what it would be like to be a royal? Perhaps after watching The Crown or some period drama? Artist Clyde Haber seems to have dwelt on such a prospect long enough to decide to create a collection of works on this theme. 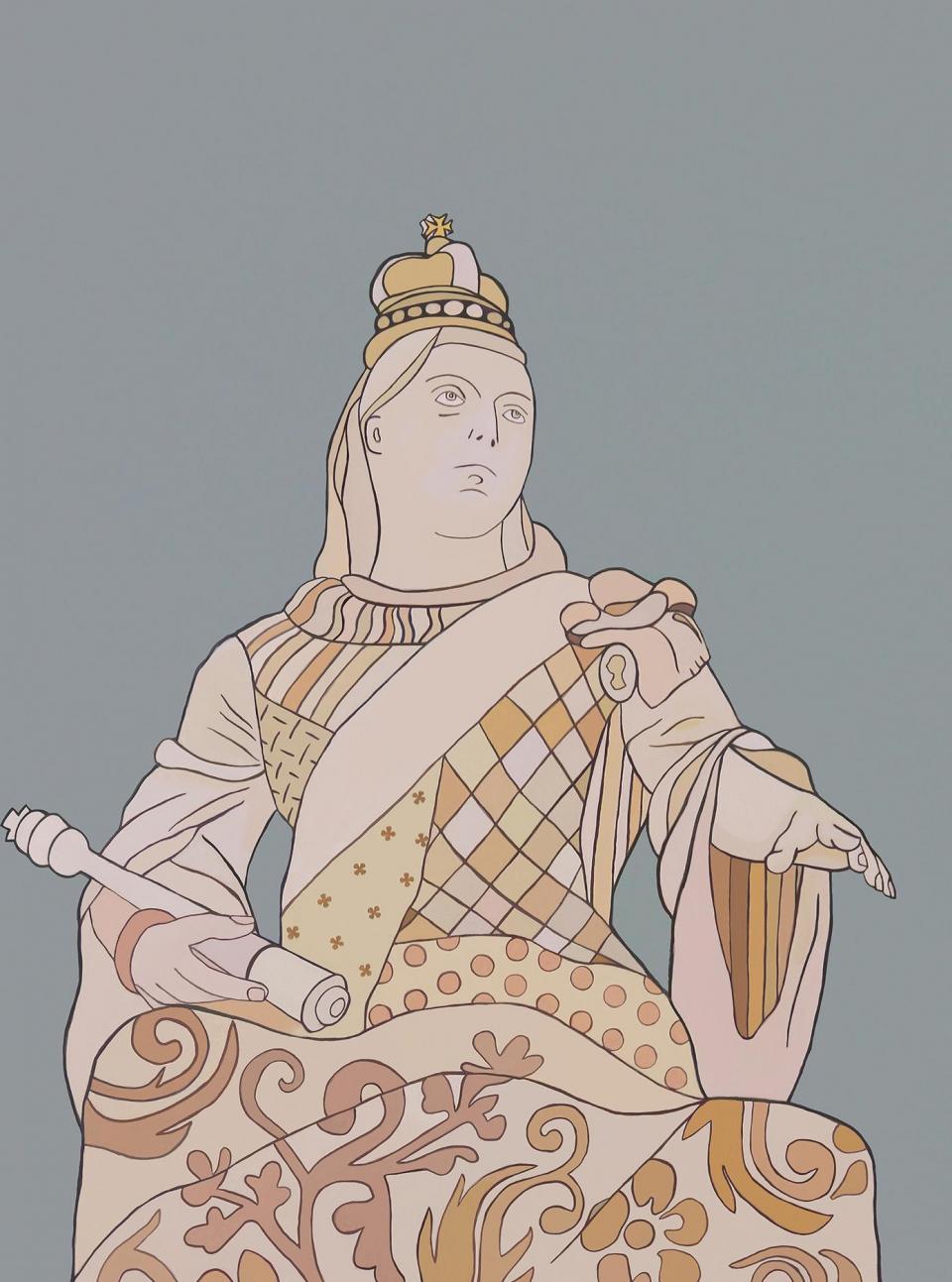 The outcome of his musings is the exhibition Queen For a Day, now open at La Bottega Art Bistro, in Valletta. Among the works on display are portraits of a girl wearing an oversized crown and of a young man who seemingly also dreams of becoming a queen. Of particular note are three quirky prints of the Queen Victoria statue in Valletta, one of which features her blowing a pink bubble gum bubble and playing with a yo-yo and another one of her wearing bondage gear!

“The collection revolves around the idea of being royalty for a day, a queen,” Haber says. 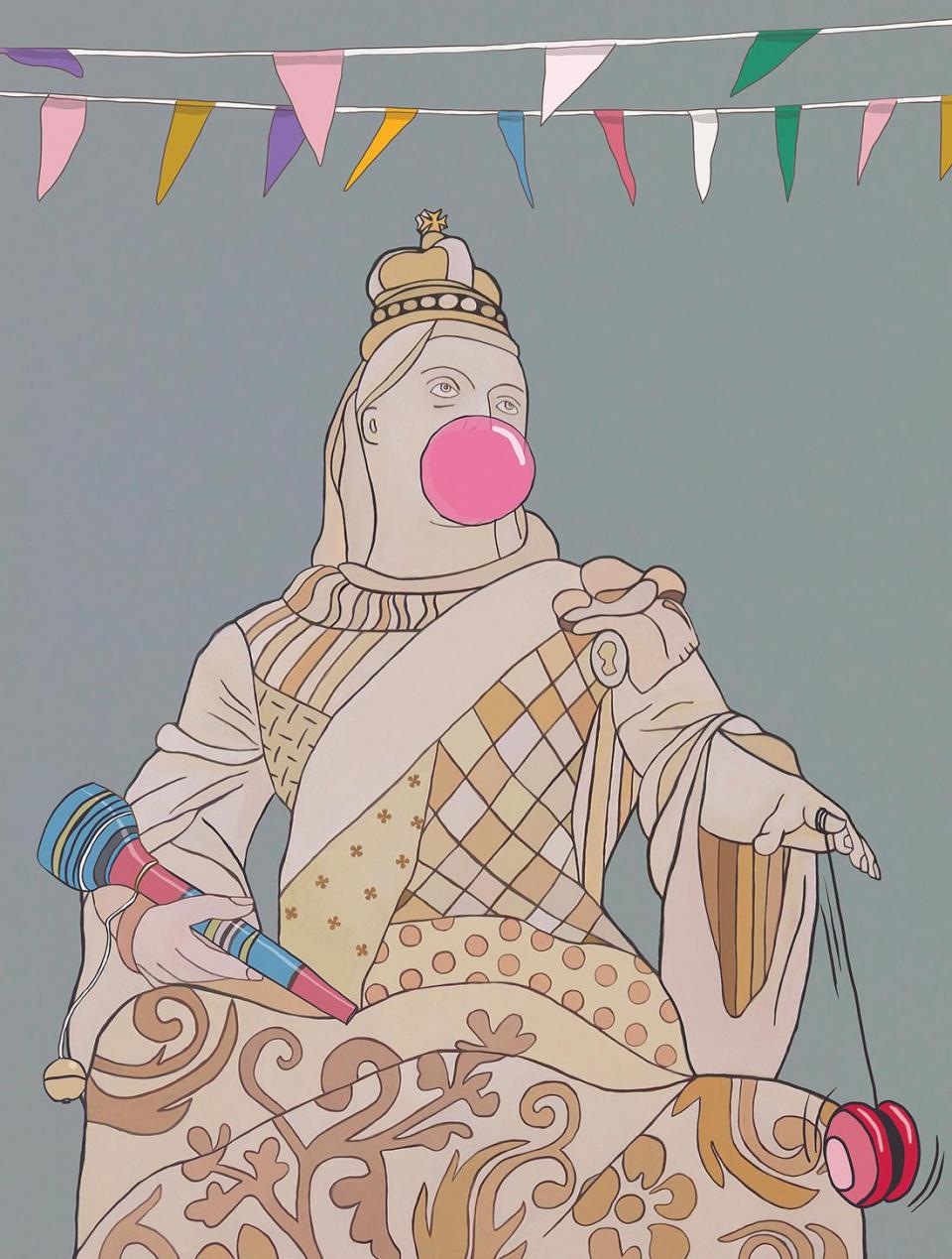 “The idea came through discussion with Lily, from Lily Agius Gallery, about the fact that, especially during COVID, people still felt the need to be pampered and special but couldn’t do much about it.”

He gives an overview of his pieces, which he created specifically for the exhibition.

The Girl with the Crown portrays a girl holding a crown, toying with the idea that one day she will be the queen too. What is a Crown Worth shows the subject worried about what it takes to keep up appearances, while Don’t Ponder Too Much represents those who analyse life too much “when they already have what they want”, Haber says. 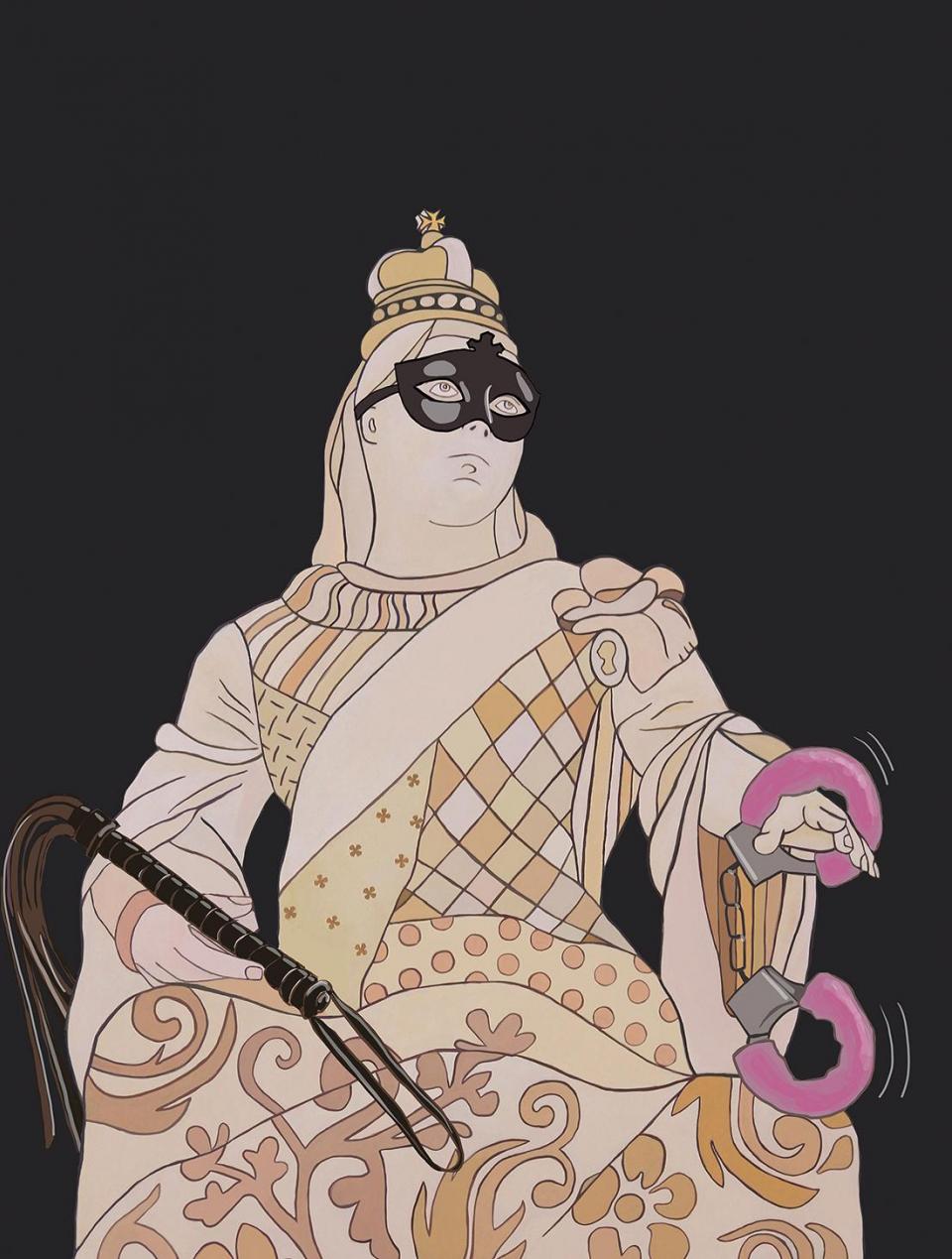 The Crown Is All Mine features a male model and represents the self-love men are regaining. “It’s about generation of men in society who love grooming treatments as much as women… A man fit for a queen,” he remarks.

On the other hand, the model in The Crown seems to be in a melancholic mood. “He may be feeling the pressure of the crown and may not want to be a queen after all,” the artist notes.

The other three works on show are prints of a painting representing the Queen Victoria monument in Republic Square, Valletta.

Apart from the original version, there is also a playful version of her in which she sports a yo-yo at a tea party and also a “kinky Victoria”, since she was also known for her high libido.

Haber’s style can be described as quirky and quite out of the ordinary, something that the artist relishes profoundly. 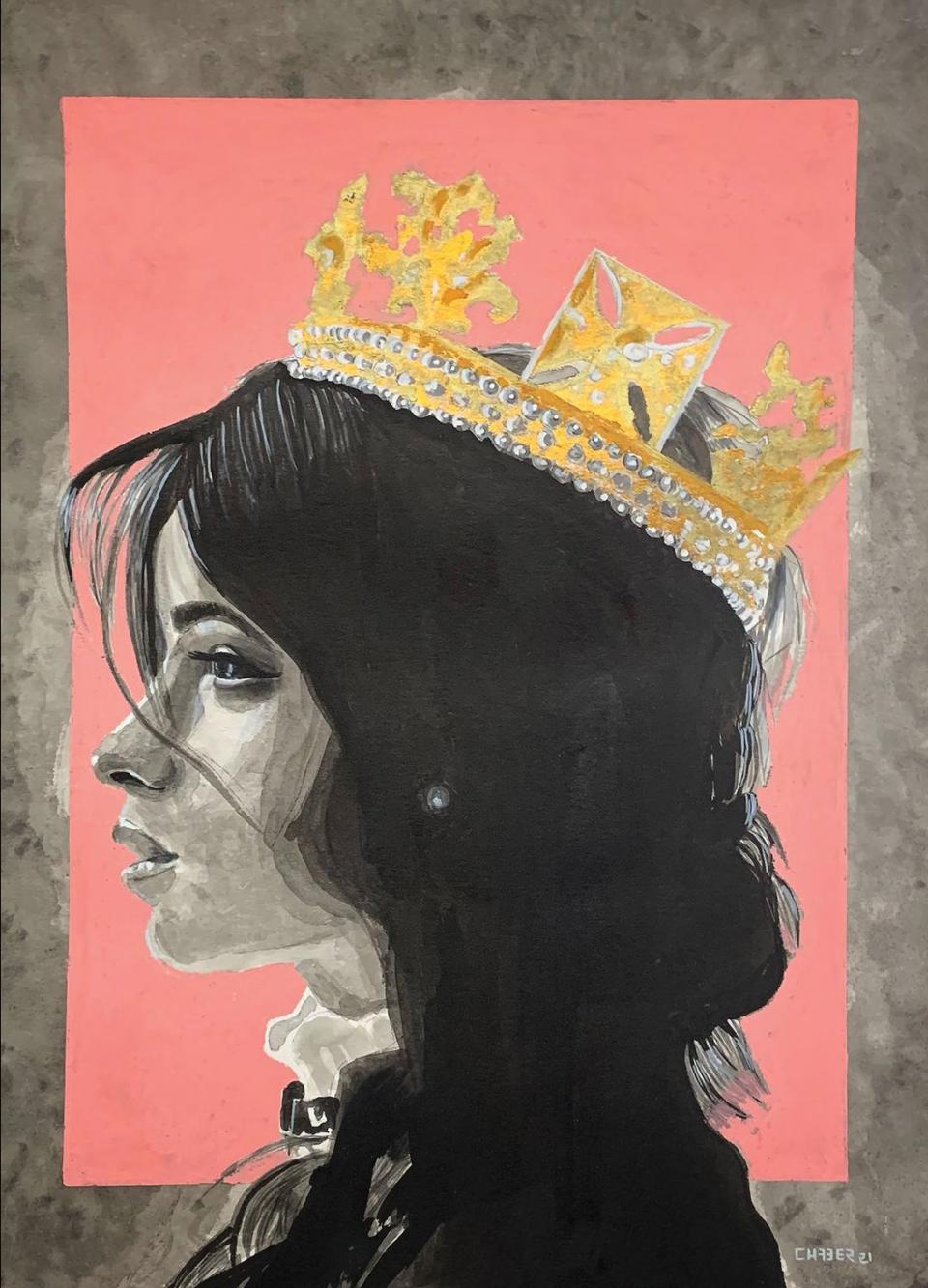 Don’t Ponder Too Much

He adds that his inspiration comes in many forms.

“Sometimes it’s one of my son’s scribbles, sometimes it’s an emotion or feeling I am going through and other times it’s something I see or observe.”

Haber, who studied at the Malta School of Art, MCAST and at the university, says that he was mostly influenced by his mentor and late Maltese modernist artist, Harry Alden. 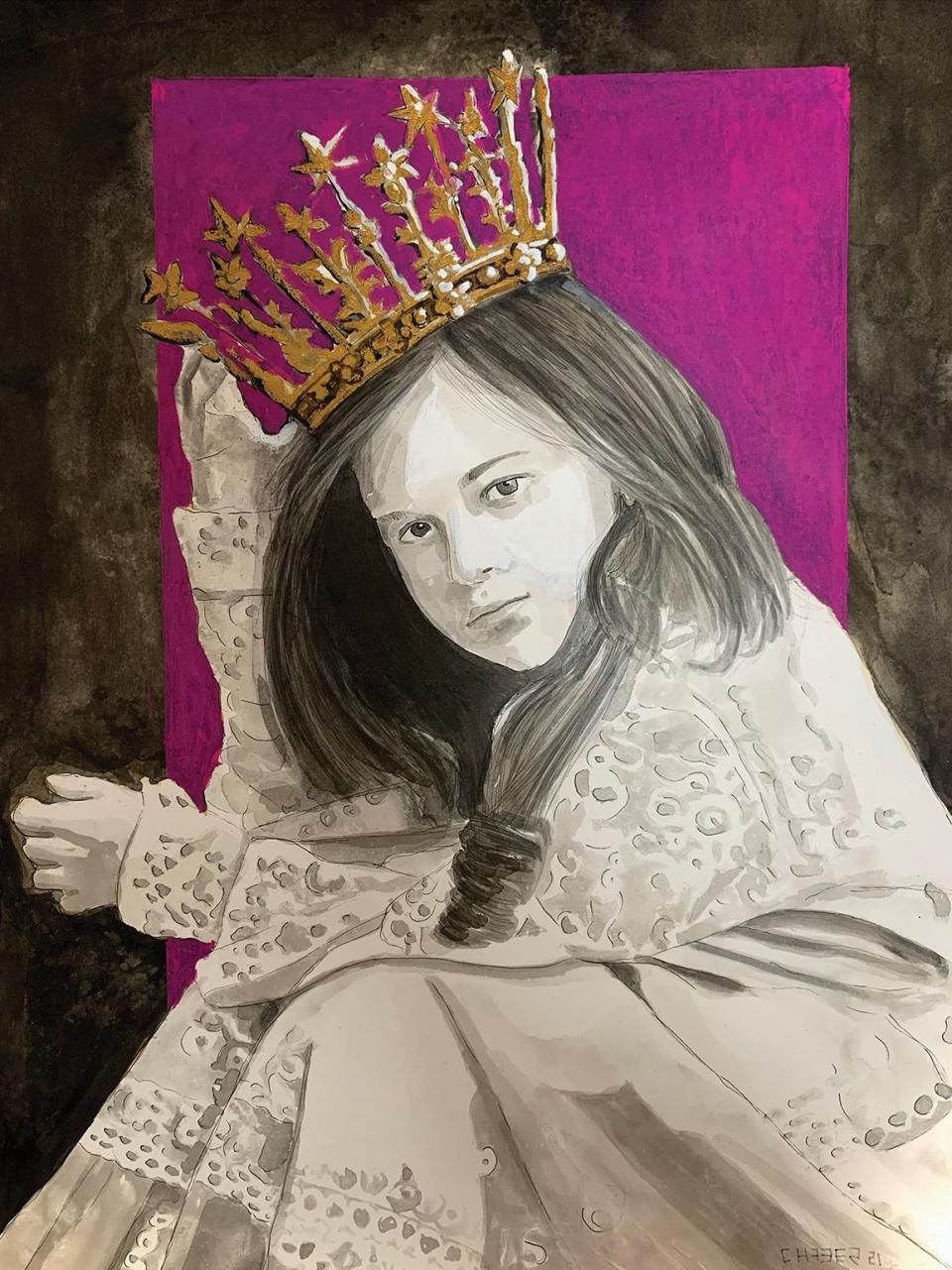 The Girl with the Crown

“I have very fond memories of Harry and I remember that he was always joyful and passing jokes. Harry had an influence on my painting as he instilled in me that sense of cleanliness both in design and also in how to apply colour,” he says.

“He was very disciplined in his art and one thing he really loved to do was to achieve a balanced picture without the use of symmetry. I still follow those guidelines of how to make an interesting painting by not having half the picture mirrored on the other half.”

Haber forms part of The Studio Collective together with eight other artists, who attended art sessions at Alden’s.

“We remained good friends and we try to hold a collective exhibition almost every two years.”

A Queen for A Day is open from noon to 7pm every day until July 18, at La Bottega Art Bistro, 201, Merchants Street, Valletta. COVID restrictions apply. For more information, contact Lily Agius Gallery on (+356) 99292488. One can meet the artist every Friday between 5 and 7pm.