Fumes from cruise liners berthed in Valletta’s Grand Harbour are reaching toxic levels 10 times higher than the island’s most congested roads, according to the man who blew the whistle on the Volkswagen emissions scandal.

“This is a problem people do not see. They think the cruise industry brings tourists and money, but it is also bringing major health problems,” Axel Friedrich told The Sunday Times of Malta.

Every month several of the world’s largest cruise ships chug into the heart of Grand Harbour.

The floating behemoths boast luxury restaurants, glitzy casinos and exotic entertainment – but keep quiet about the hidden toxins they are pumping into the country’s air.

Nearly 70,000 tourists hopped off crammed cruise ships that stopped in Malta in the first three months of this year, with the figure normally doubling in the busy summer months.

Leaning over what looks like medical equipment, in fact used to measure the microscopic particles puffing out of ship chimneys, Dr Friedrich throws himself into his latest findings on Malta. On one day of data recording, he and his team found three cruise liners in the Valletta terminal.

Factoring in wind direction, and the vessels’ arrival and departure times, he said they had recorded shocking levels of air pollutants from one vantage point in Senglea.

“As soon as the breeze blew our way, the readings went way up,” said Janina Laurent, a conservationist who is helping to take the local readings.

Pointing at the sharp peaks on the air pollution graphs, Ms Laurent said the maximum level recorded in the harbour was around 110,000 particles per cubic centimetre.

What does that mean?

Dr Friedrich said that normal seaside air generally contains around 500 particles per cubic metre. Maltese seaside readings, factoring in the island’s small size, were expected to read at around 2,000 particles, due to the proximity of the country’s roads to the shoreline. 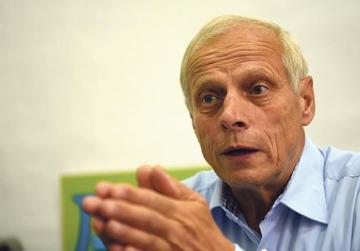 By way of comparison, readings taken from the Marsa Junction, one of the most congested roads on the island, came back at an average of just around 15,000 particles per cubic centimetre.

And to those who think the readings are just numbers on a piece of paper, Dr Friedrich said pioneering research showed how every time the readings went up by 1,000 particles, the incidence of heart attacks increased by around seven per cent.

If a ship were on land, like a factory or power plant, the emissions would be completely illegal

These particles can penetrate deep into the lung, go into the lung wall and enter the bloodstream, causing heart attacks, diabetes and a host of other health concerns.

In fact, last year the World Health Organization placed diesel particles in the same category of carcinogens as smoking and asbestos.

And, according to the European Environment Agency, 60,000 people die as a consequence of shipping and cruise liner emissions every year.

Air pollution in Malta has long been on the agenda, as the island continues to have some of the worst air in Europe. Earlier this year the European Environment Agency found that only Bulgaria, Poland and Greece had dirtier air than Malta.

And the invisible cloud is not just forming over the island’s harbour area.

Air pollution, Dr Friedrich said, is democratic – it blows in one direction one day and in the opposite the next. The ships’ fumes can reach urban areas tens of kilometres away.

What made Malta even more susceptible, Dr Friedrich said, was its international importance as a bunkering hub.

Maritime motels like Herd’s Bank, where ships await clearance to enter ports, are dotted around the island’s waters and crowded with merchant ships all year long.

Malta is not alone.

In the Mediterranean Sea, fuel used in the shipping and cruise liner industries is not as tightly restricted as in other seas, since the region is not considered a low emissions area.

Dr Friedrich said he had registered similar readings in other harbour cities in Italy, France, and Spain, only to see the same ships burn much cleaner fuel when entering other areas such as the North Sea, where stricter controls are enforced.

“The best solution, for me, has to be regulations that force the industry to use cleaner fuel. We have seen this in the automobile industry and we will see it again in this industry too,” he said.

Dr Friedrich was plunged into the international spotlight when he spoke up as one of the main whistleblowers to expose major abuse by German car manufacturing giant Volkswagen.

Drawing upon his experience at the helm of the Federal Environment Agency in Germany, Dr Friedrich explained how fuel pumps used by motorists today placed a limit on the amount of residues they contained.

He said automobile fuel today was around 3,500 times less toxic than that being burnt by ships in the Mediterranean.

“Think of it this way: if a ship were on land, like a factory or a power plant, the emissions would be completely illegal.

“We have tackled this issue with cars, we should do it with ships too,” he said.

Volkswagen and its dieselgate

This allowed a Volkswagen’s emissions to meet international standards during regulatory testing but emit up to 40 times more in real-world driving.

Volkswagen deployed this programming software in about 11 million cars worldwide. The scandal led to the arrest of Audi CEO Rupert Stadler earlier this month.

Dr Friedrich blew the whistle on many of the emissions irregularities and the cover-up that ensued.