Trasparenza is an exhibition of works created by Maltese artist Enrique Tabone between 2010 and 2020. Joseph Agius caught up with curator Toni Sant after the exhibition opening.

JA: What led you to curating this exhibition by Enrique Tabone?

TS: I first came across Enrique Tabone’s work in 2010. Her installation Dazzle Escape was exhibited along with works by five other women: Elisa von Brockdorff, Romina Delia, the late Jasmina Relijc, Teresa Sciberras and Christine X. Although this is just 12 years ago, it’s significant to note that this approach was rather unusual in Malta at that time.

I also followed the mini controversy around her Souvenir installation at the launch of the Strada Stretta Splendid Lounge, where her art was misidentified as aborted foetuses. Soon after this, I became aware of her seating sculpture Red Leaf, which is permanently installed at the Sculpture Garden in the grounds of Verdala Palace.

However, the work that really made me want to get to know this artist as I do now was Mewweġ, which was commissioned by the Valletta 2018 Foundation for BirguFest 2014.

Around that time, I became the artistic director at Malta’s national centre for creativity, Spazju Kreattiv. As part of the VIVA (Valletta International Visual Arts) festival in 2017, we commissioned another large-scale piece by Tabone called Naħla. After substantial setbacks with its installation as intended, the work ended up being accidentally destroyed in transit to the Malta Society of Arts. This led to a new working relationship bet­ween me and the artist.

The salvaged wings from Naħla became part of the Spazju Kreattiv permanent art collection. We exhibited these majestically as part of an Art+Feminism 2019 exhibition featuring all the works by women artists in that collection. It was during that exhibition that we started discussing the need for works by Tabone to be exhibited in different contexts.

I find her keen sense of political commentary as vibrant as the specialised use of materials for her works.

JA: As the exhibition is called Trasparenza, it’s easy to assume that this refers to the plexiglass at the heart of most of the works created by this artist. However, you clearly infer more than an aesthetic comment through this title. How do you extend this idea as a theme for the exhibition beyond the transparent material the artist employs so prolifically? 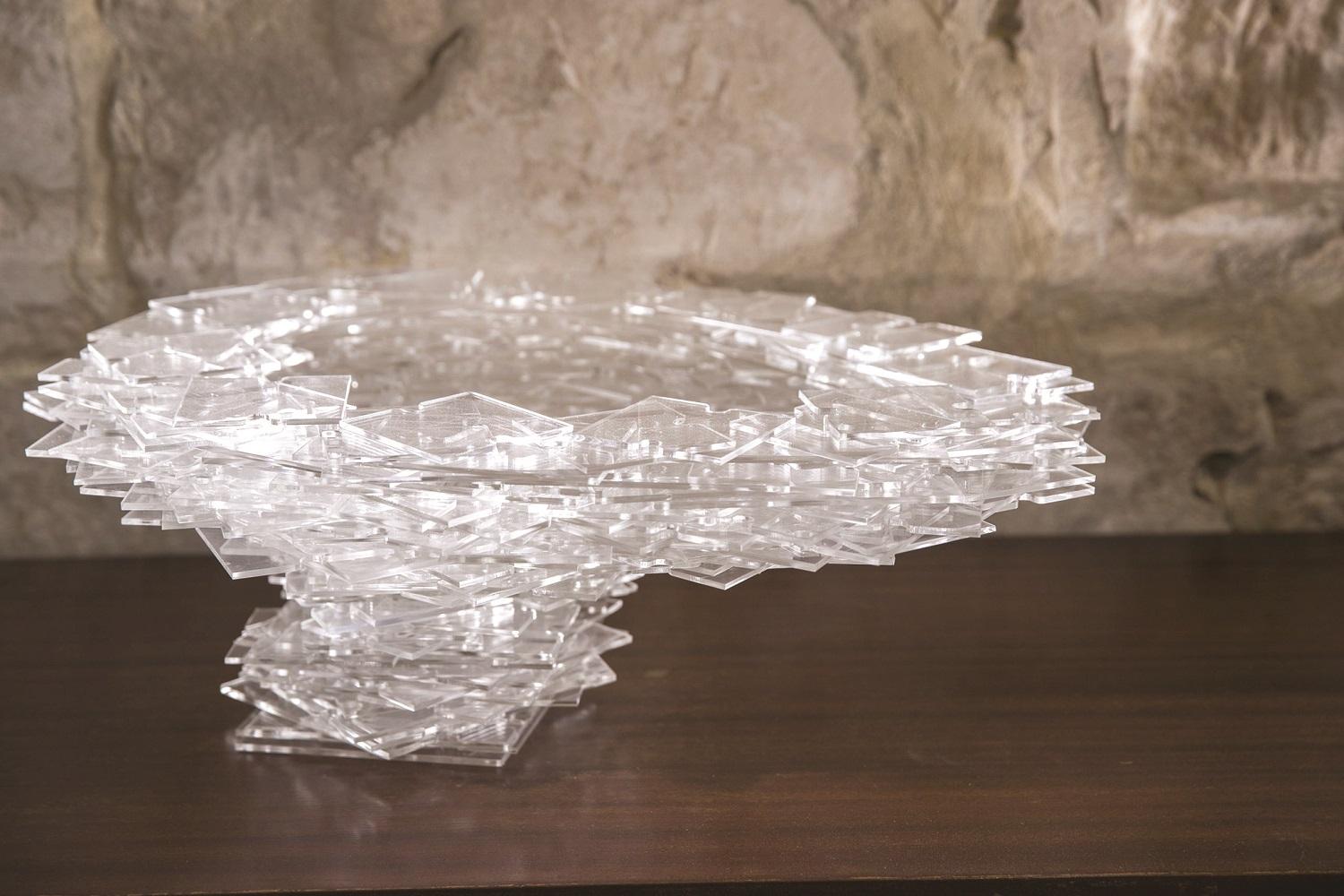 TS: All the works in this exhibition share two common elements: they all involve transparent media and explore aspects of cultural identity. The exploration of identity spans across a range of themes from stereotypes of iconography presumed to be Maltese to statements of personal identity, including intercultural identities. The latter aspect is how the China Cultural Centre came to be colla­borators on this exhibition, following the artist’s residency in Guizhou a few years ago.

“All the works in this exhibition share two common elements: they all involve transparent media and explore aspects of cultural identity” – Toni Sant

In his Poetics of Relation, Edouard Glissant discusses the right to opacity. This idea drives the interplay between transparency and opacity from personal identity politics to the power plays of the political class favouring opacity over transparency. In Malta, this resonates very clearly in, for example, the financial affairs surrounding politi­cal party broadcasting channels, among other abhorrations of transparency. Then again, it also extends well beyond Malta, in all sorts of ways too, of course.

I don’t want to imbue too much additional meaning into the artist’s work. Tabone’s work is often hard to classify, even before we take a closer look at it beyond the material objects presented to us by the artist.

JA: Why do you think that Tabone’s work is hard to classify? 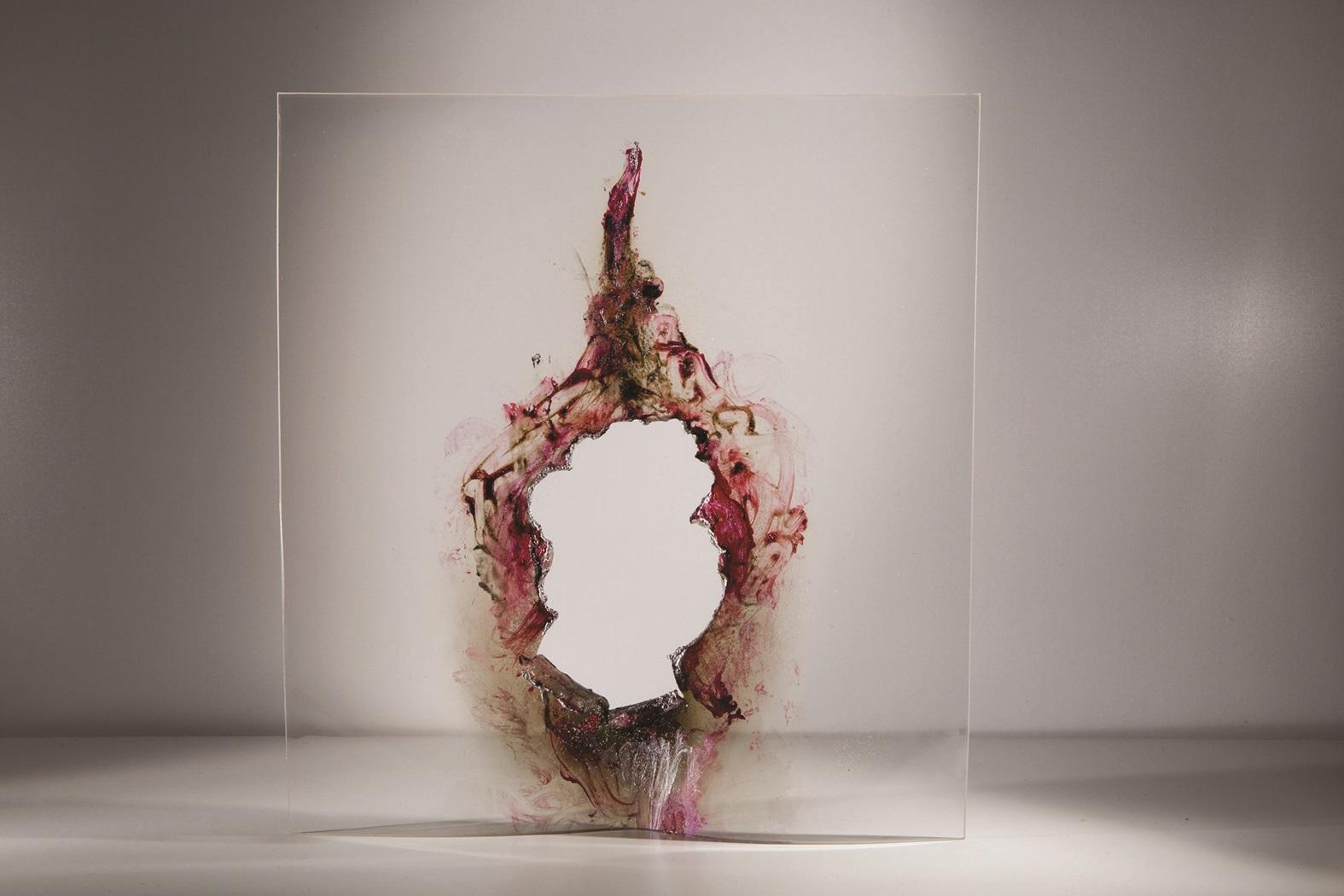 TS: In 2019, I was involved in curating a selection of works by 10 artists from Malta at the Ostrale Contemporary Art Biennale in Dresden, Germany. To be frank, I was quite disappointed by the gender gap in the list of Maltese artists that made it to the final selection.

I wanted to continue addressing this actively, which is why I invited Tabone and a number of other Maltese women artists to work with me in addressing the gender gap in the local art scene. To be fair, things are not half as bad as they used to be even just 10 years ago. Then again, whenever it comes to institutional representation in Malta, there’s still an apparent predominance of men. Thankfully, a new generation of artists and curators seem to finally be taking us beyond a male-dominated art scene.

Aside from gender politics, the fact that Tabone is not a painter, a video artist or someone who produces work that can easily be hung on a wall, if not bought and sold as a commodity, makes her work harder to exhibit easily and without careful consideration. She is very aware of this herself. 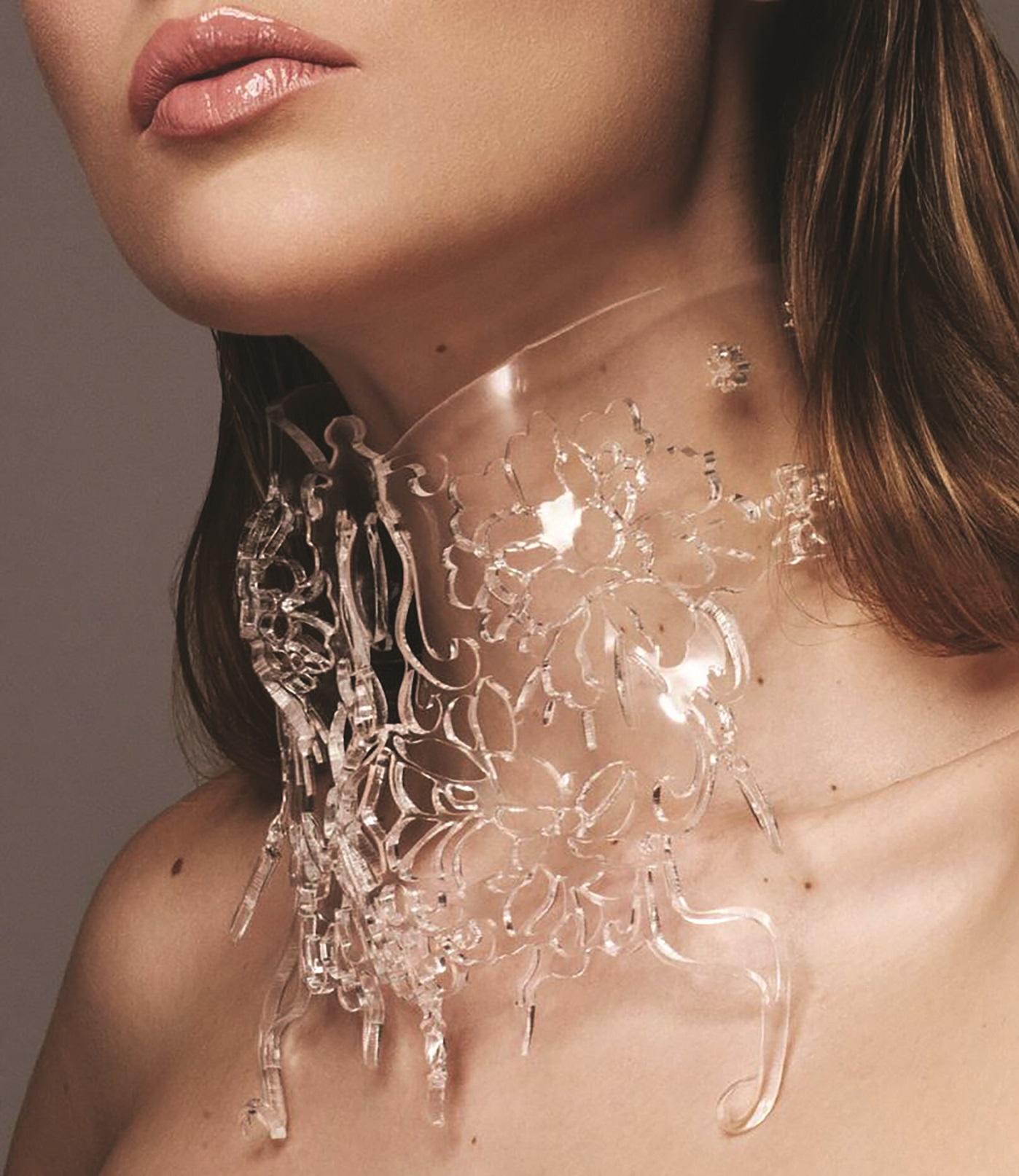 This is also evident in the two professional identities under which she operates. Tabone is both an artist of large-scale installations and delicate transparent plexiglass artworks as well as founder of the QUE Design Studio and QUEstijl brand producing wearable art objects and adornments.

In parallel to the works of art produced by Tabone, there’s also an impressive line of wearable art objects that she has produced through her QUE Design Studio over the past decade or so. Discerning individuals are able to appreciate the fact that they can wear art produced by the same artist who makes plexiglass objects intended for exhibition in fine art contexts. Still, it’s essential to note that, while the two approaches are related, they pertain to different ways she creates body adornments or comments on the world we live in. 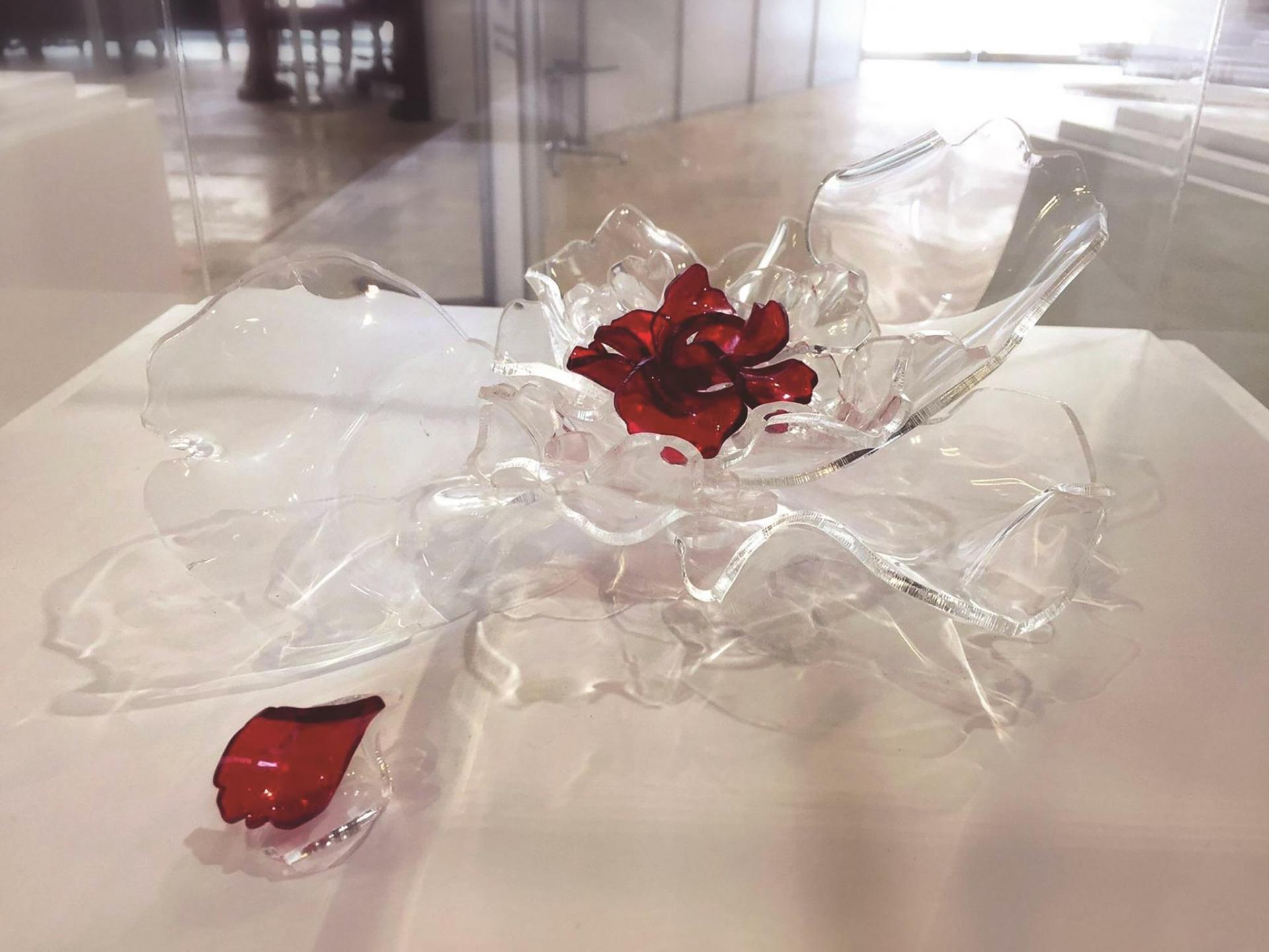 'Where Flowers Bloom So Does Hope' features rare use of colour in Tabone’s work, following the overwhelming presence of red witnessed during the artist’s visit to China. Photo: Jean Marc Zerafa

For the most part, it’s easy enough to tell the two apart while maintaining an aura of continuity, which is both stylistic and aesthetic. 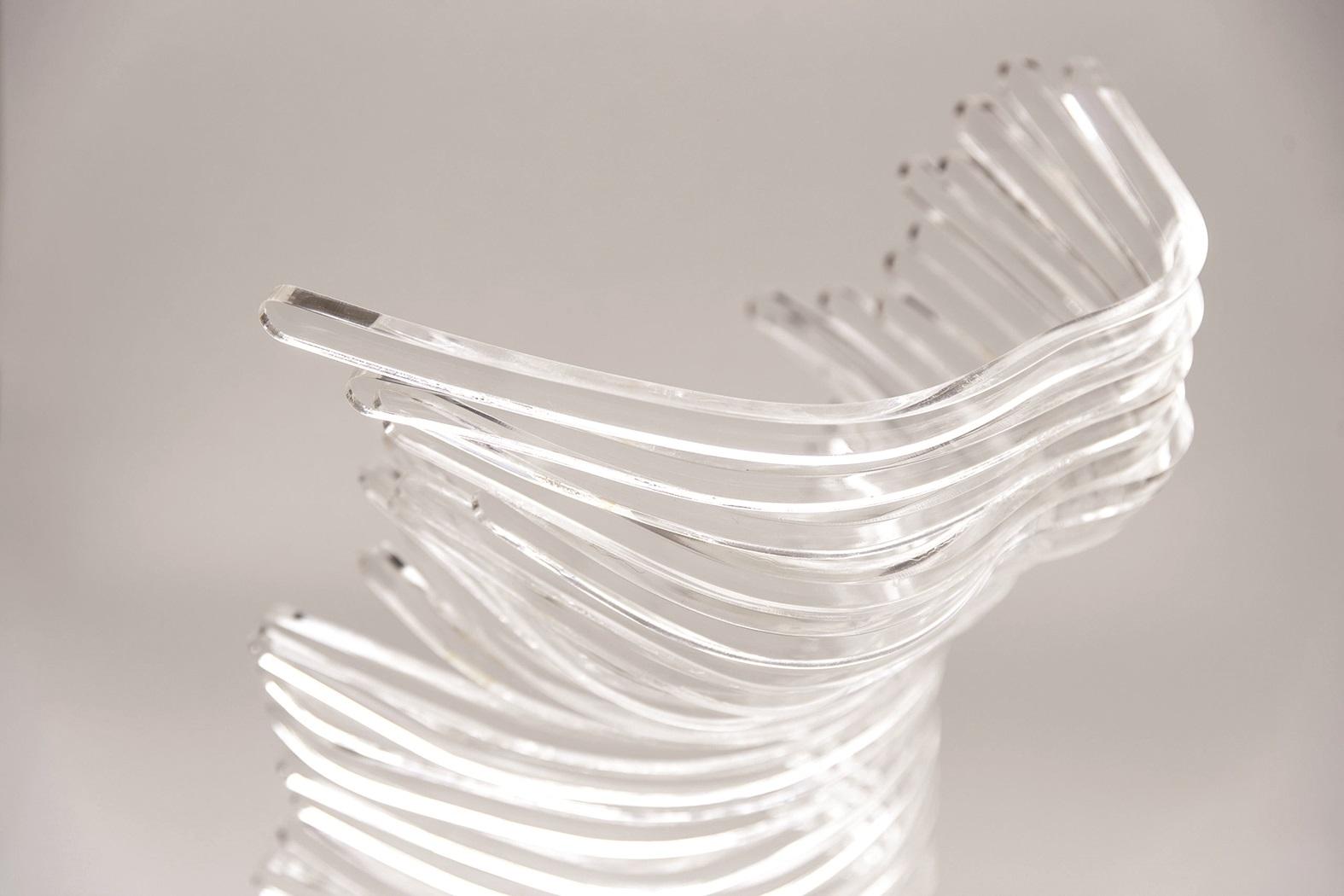 JA: What are you preparing for the next exhibition by Enrique Tabone?

TS: Spazju Kreattiv will be presenting her next major exhibition in March 2023. Pre-storjha extends from the initial explorations Tabone presented in the series Pre-Herstory during the 2020 edition of Art+Feminism. In essence, this involves a feminist reimagining of female figures in prehistoric remains. Collaborators include Cambridge-based archaeologist Isabelle Vella Gregory and fellow artist Alex Attard. This project will lead to the publication of a catalogue raisonnè of Tabone art, with special focus on the new works crea­ted for Pre-storjha, which will be published in a limited edition by Kite Group.

The exhibition Trasparenza is hosted by the Institute of Maltese Studies at the University of Malta’s Valletta Campus until Saturday, in collaboration with Spazju Kreattiv and the China Cultural Centre − Malta. More about Enrique Tabone’s art can be found at www.enriquetabone.com. 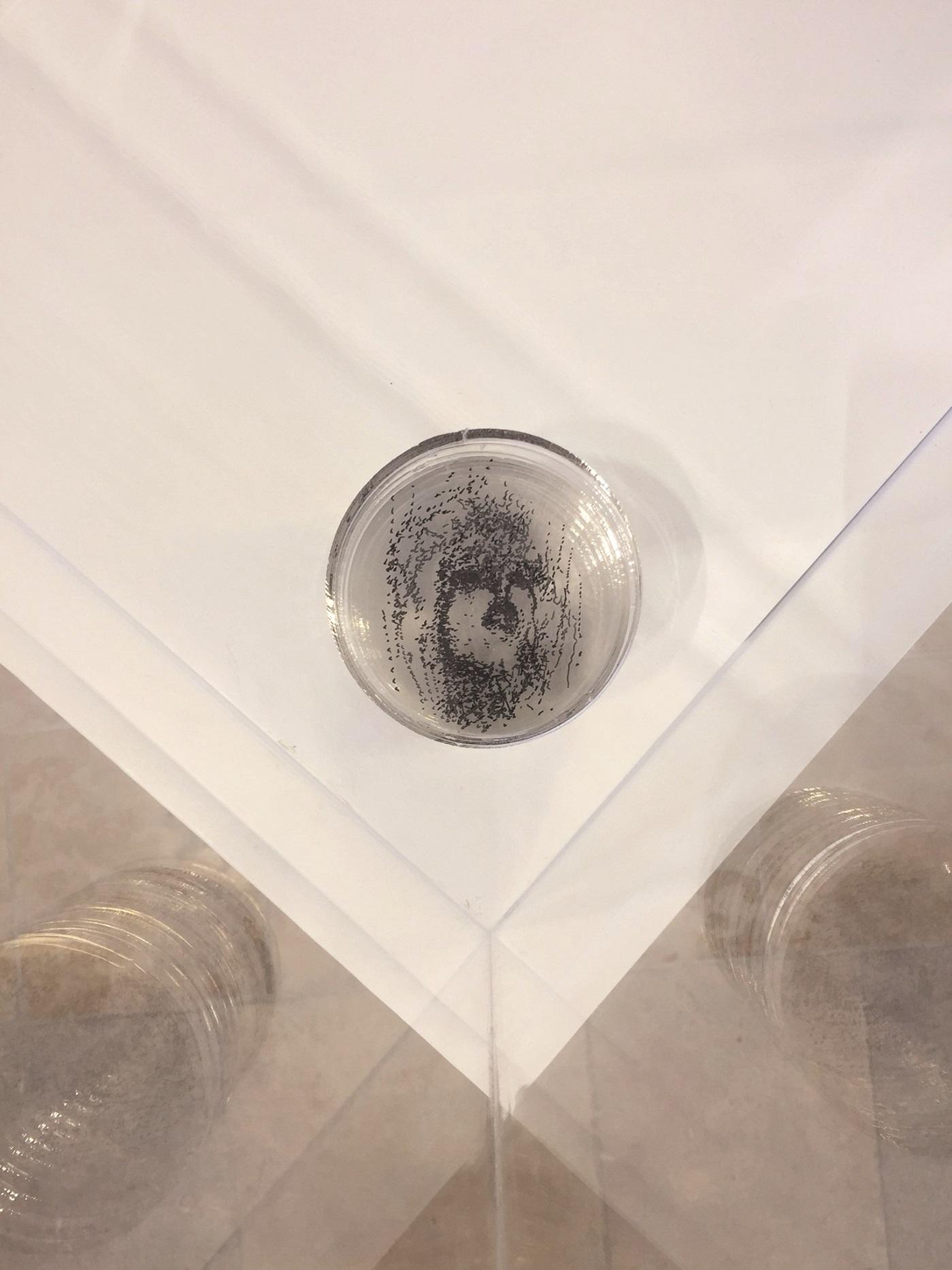 Self-portrait presented through the interplay of indelible ink on layered plexiglass discs. Photo: courtesy of the artist