Front-line research by a Maltese astrophysicist, who led a team of international astronomers, is shedding light on the distant universe and contributing another piece to the complex cosmic puzzle.

“In a sense, astronomers are historians. Our telescopes act as time machines that allow us to pore over light from the past. We then try to understand what this light is telling us and construct a timeline of how structure evolved to become the galaxies we observe today,” University of Malta lecturer Joseph Caruana said.

Dr Caruana’s research paper has just been accepted for publication in the Monthly Notices of the Royal Astronomical Society, one of the world’s leading, peer-reviewed astronomy journals for the past 188 years.

The paper presents the discovery of 100 galaxies that emit ultraviolet light known as Lyman alpha, a feature in the spectrum of light that acts as a ‘fingerprint’ and enables astronomers to measure the precise distance to these galaxies. 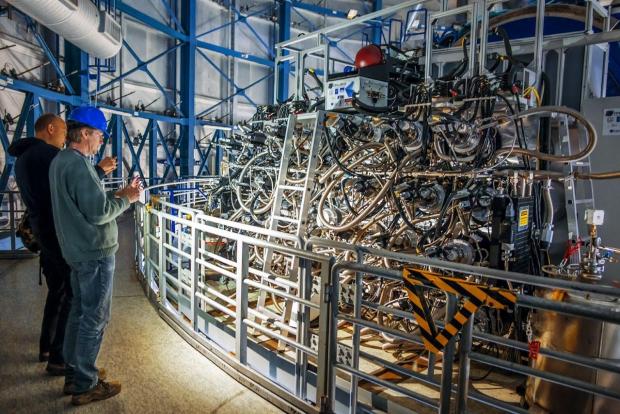 The intricate network of pipes surrounding the 24 spectrographs of the MUSE instrument on the Very Large Telescope. Photo: A. Tudorica/ESO

When studying distant galaxies, Lyman alpha is a much sought-after feature in the spectrum of light. Galaxies that are forming new stars spew out Lyman alpha, so this feature is a tracer of star formation activity in galaxies.

Dr Caruana, who forms part of the Department of Physics and the Institute of Space Sciences & Astronomy (ISSA), however, explained that there were a number of obstacles that hindered the emergence of this light, and its escape is a key question in the study of galaxies.

Moreover, the distance to these galaxies is so large that the universe has expanded significantly in size since their light started the journey toward Earth.

“We are looking into the deep past of our universe, observing light that started its journey between 11.6 and 12.8 billion years ago. Just imagine, the universe is 13.8 billion years old,” Dr Caruana added.

To carry out this study, the international team of astronomers, who are affiliated to nine institutions across Europe, used MUSE — the Multi Unit Spectroscopic Explorer — a state-of-the-art instrument installed on the Very Large Telescope in Chile.

“The story of our universe is constructed piece by piece, somewhat akin to assembling a puzzle, where astronomers strive to understand galaxies in their various stages of formation."

Roland Bacon, the principal investigator of the MUSE consortium from the Lyon Centre for Astrophysics Research commented that MUSE is a unique instrument with incomparable performance, enabling new science in many different areas of astrophysics: from the study of nearby galactic clusters to the most distant galaxies.

The discovery of Dr Caruana’s team will be presented at an international conference being held in Valletta between October 2-6. More than 100 astronomers from all over the world will converge in Malta to focus on the topic of galactic dynamics. An event for the public will also be held on the evening of October 5 at the Valletta Campus of the University of Malta. More information can be found at http://gasingalaxiesconference.com

The Department of Physics and the Institute of Space Sciences & Astronomy (ISSA) are also currently involved in a number of research projects, with students focusing on problems in various fields, from radio astronomy to galactic dynamics, instrumentation and night-sky brightness measurements. Interested students can obtain more information via the respective webpages at: https://www.um.edu.mt/science/physics and https://www.um.edu.mt/issa