A cyclist who was attacked by a car driver wearing a brass knuckle near St Dorothy’s School is Żebbuġ on Friday is appealing for witnesses.

In what appears to be another case of road rage, Robert Micallef said a car driver told him to move to the side of the road as he was cycling in the bypass between Żebbuġ and Rabat around 6pm.

"I was nowhere close to the middle of the road," said Mr Micallef, who initially posted photos of his injuries on the Bicycle Advocacy Group on Facebook. 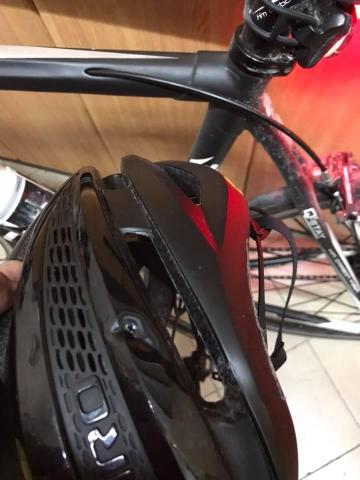 Mr Micallef, who has been riding a bicycle for the past 32 years, covering 300 to 400 kilometres a month, said he was cycling at a speed of about 50 kilometres an hour.

As he continued on his way, he found the car driver waiting for him out of the car further down the road and at one point saw him searching for something under  the driver’s seat.

Mr Micallef rode on but the car driver went back inside the car and followed him, catching up with him near the school, this time pressing him against the wall to force him to stop.

The cyclist said he saw his attacker, a Maltese national, wearing a brass knuckle before getting out of the car. He tried to put his €8,000 bike between him and his attacker for protection but the driver hurled it out of the way and after he fell punched him, but luckily the impact hit his helmet.

Mr Micallef said the driver continued to kick him until a man came by and stopped him.

He said many car drivers had witnessed the attack, some even stopped their vehicle, but they all drove on.

His attacker left the scene with a threat: “If I see you again I will shoot you.”

Nursing bruised ribs, Mr Micallef went to the Żebbuġ police station where he filed a report. On the way, the car driver caught up with him again and stopped but then drove on.

The police sent Mr Micallef to hospital to obtain a report about his injuries.

"Although it's normal for drivers to get angry at cyclists in Malta, it's unusual to be followed and attacked by an armed man," he said.

The incident has not put Mr Micallef off cycling and he promised to be back on his bike on Sunday. But this time he will be wearing a helmet camera.

Did you witness the attack? Write to us on mynews@timesofmalta.com