New bicycle lanes at a Tal-Balal Road junction in San Ġwann have been slammed by cyclists as “unsafe” and “substandard”.

The Bicycle Advocacy Group (BAG) urged its members and other cyclists not to use the new lanes, introduced by Infrastructure Malta, the government roadworks agency, as part of a major ongoing project on the stretch of road between San Ġwann and Naxxar.

Photos taken by the group show the new lanes, marked out in green paint, crisscrossing the road and, in the case of one lane, leading directly into the wall of a nearby building.

“Green paint is not a substitute for cycling infrastructure, especially in such a busy junction. Apart from the confusion to car drivers, such design will increase the danger to people travelling on bicycles,” BAG said.

“Such paint is also slippery, thus rendering these lanes useless in wet conditions and causing unnecessary accidents which can be fatal. It will also fade with time and use.

“We urge Infrastructure Malta and Transport Malta to provide cyclists with safe and direct access on our roads before accidents begin to occur.” 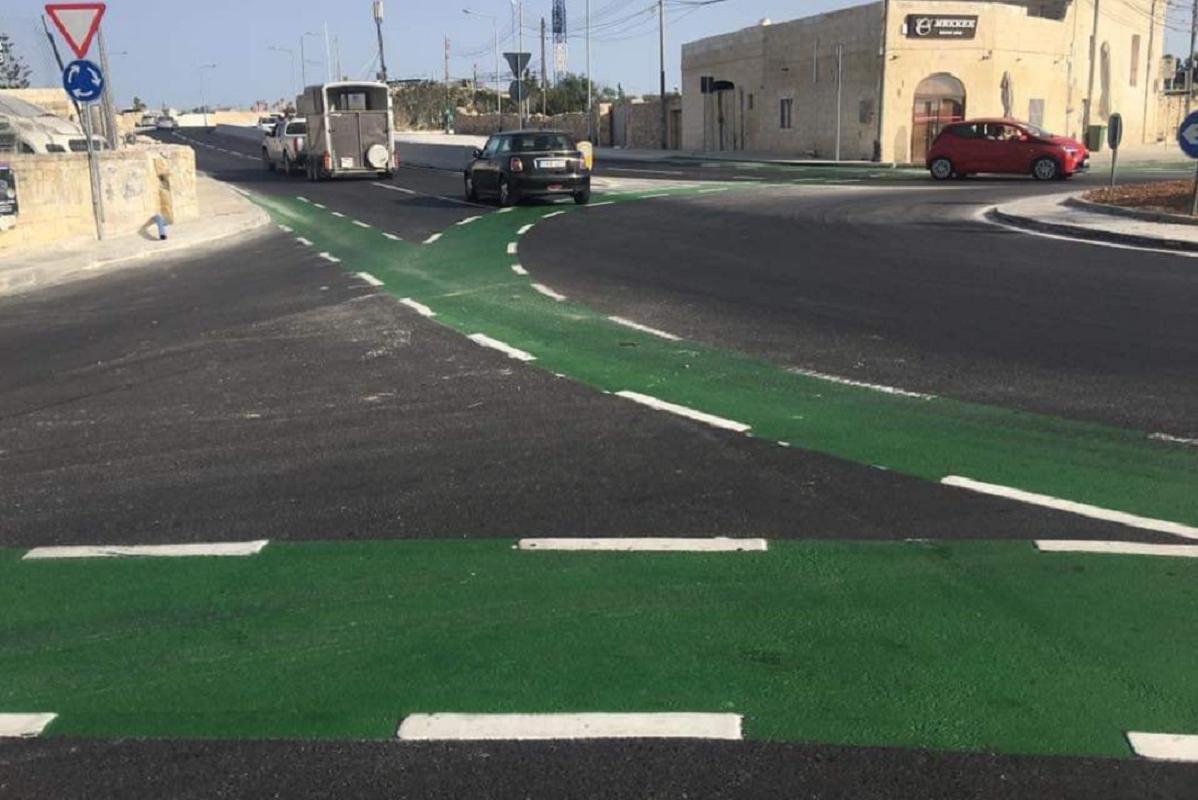 Cyclists say the new bike lanes on Tal-Balal road, already flagged as unsafe by the transport authority, do not offer sufficient protection for such a busy junction. Photo: Bicycle Advocacy Group.

Unsafe cycle lanes at Tal-Balal have already been flagged by Transport Malta, among 37 different issues the authority found with the plans drawn up by its fellow government agency Infrastructure Malta.

Transport Malta warned that bike lanes passing through roundabouts could cause collisions as they took up part of the lane width, meaning the rest of the lane was not wide enough to fit a vehicle alongside a cyclist.

It also criticised the fact that different stretches of the road had different provisions for cyclists – ranging from cycle lanes to shared line markings to nothing at all – which, it said, could cause confusion.

The €4.4 million upgrading project began last August without planning permission, with a permit only granted in November when much of the work had already been done.

Confusing junctions, potential bottlenecks, unsafe bus stops, and missing street signs and lighting were among the other issues flagged by Transport Malta.

This is not the first time cyclists have been unimpressed with the provisions made for them in new roadworks: alarm bells were recently sounded over the lack of segregation or enforcement at a new bike line in Triq Aldo Moro, Marsa, which cyclists say is constantly being intruded upon by cars driving at high speed, putting their lives at risk