A cruise liner with a sick passenger on board will not be allowed to enter Malta, Transport Minister Ian Borg has said.

The Bahamas-flagged Marco Polo is sailing to Malta, a Cypriot official announced Friday, after Cyprus said it could anchor offshore, but passengers could not disembark.

Cypriot Transport Minister Yiannis Karousos told state broadcaster CyBC on Friday that a passenger was complaining of symptoms similar to those of the novel coronavirus.

"The ship's owner had requested a stopover at Limassol port", the minister said, adding that there were approximately 1,000 people on board, including passengers and crew. 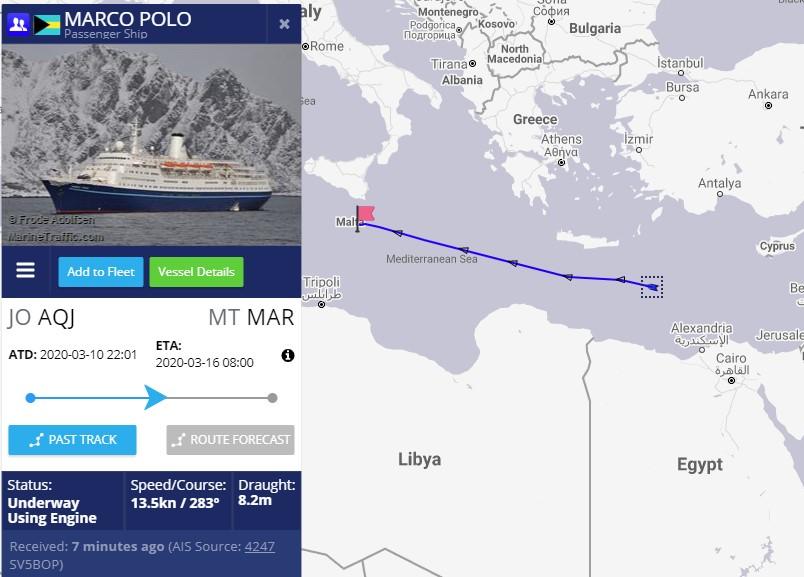 The planned route of the Marco Polo, according to ship tracking website Marine Traffic.

He said the Bahamas-flagged Marco Polo was told it could anchor off the southern port and the sick person would be treated, but that passengers would not be allowed to disembark.

"The ship's owner then decided the cruise ship would continue on its journey towards the next destination, which is Malta," he said.

However, Transport Minister Ian Borg later said the agent and Valletta Cruise Port had been informed that it was barred from entering Malta.

Cypriot broadcaster CyBC said most of the tourists on the ship were Italian.

The broadcaster reported on Thursday that the cruise liner had been at sea for a month after a trip to India and sailed for Cyprus after being denied entry by Israel.

On Thursday night, Karousos had tweeted that the ship was heading for Cyprus but that it would remain anchored offshore and passengers would not disembark.

The ship is currently in the Suez Canal.