Beneath the sumptuous ceiling of the entrance hall of Rome's Borghese Gallery, under the gaze of a dozen busts of caesars, Damien Hirst's giant sandalled foot looks only a little out of place.

The giveaway that this is not another piece of Roman sculpture but the work of the provocative British artist is the laboratory rat with an ear growing on its back that climbs on the limestone toes.

The gallery is home to a spectacular collection of classical Roman sculpture, Renaissance paintings and priceless works by Italian sculptors Gian Lorenzo Bernini and Antonio Canova. 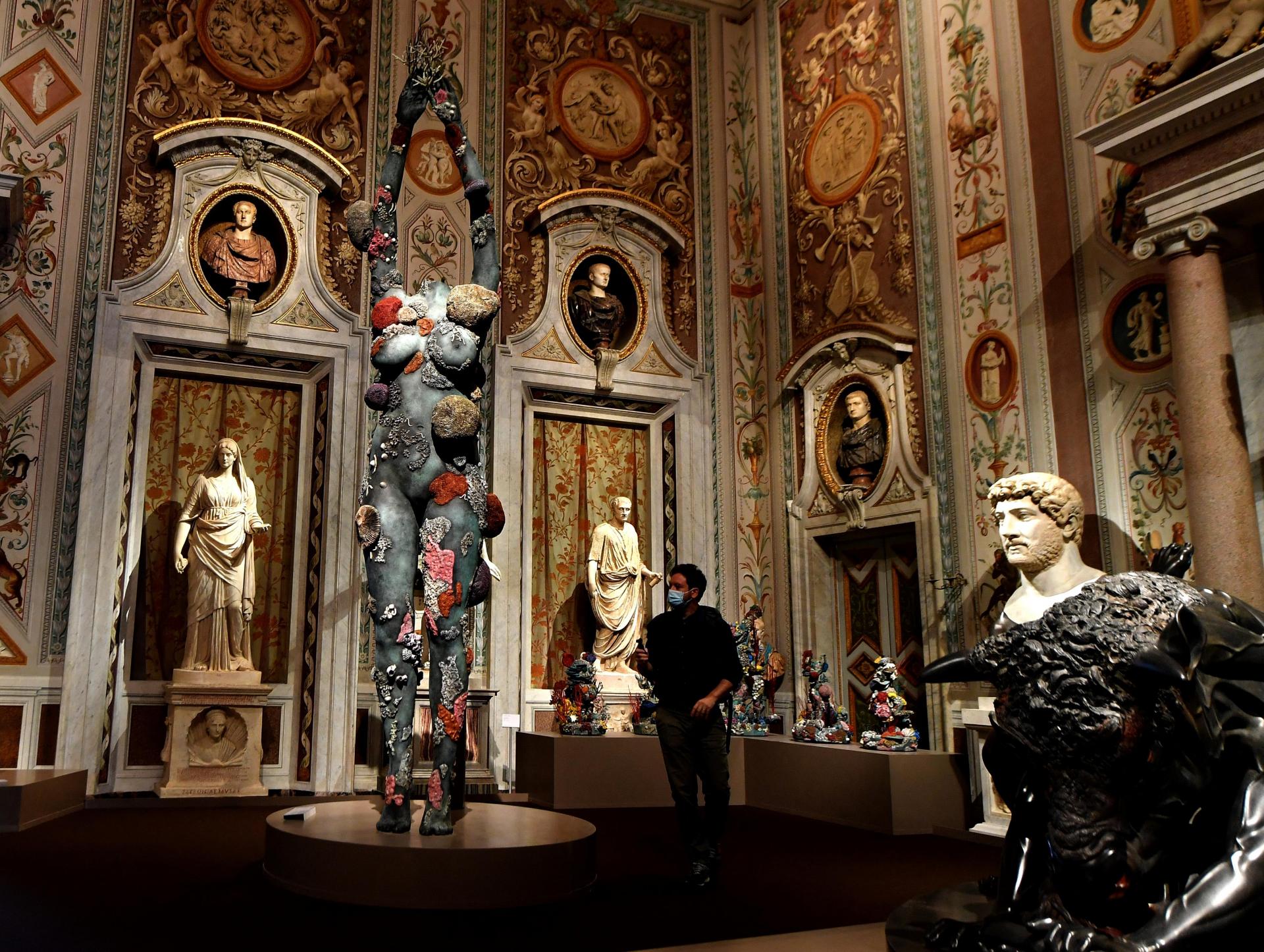 Damien Hirst’s ‘The Diver’ as part of the exhibition ‘Archaeology Now’ at Galleria Borghese in Rome.

Into this rarefied environment has stepped Hirst, for many years one of the most notorious of the "Young British Artists" who made his name by bisecting a cow and displaying it in a tank of formaldehyde.

While many of Hirst's sculptures are clearly modern, others blend into those around them thanks to his use of traditional materials such as bronze and Carrara marble.

"They are completely unsettling works, but even in the (permanent) collection there are works of strong, terrible and terrifying beauty – as true beauty is," curator Anna Coliva told AFP.

Damien Hirst works, mostly from his 2017 Venice show ‘Treasures from the Wreck of the Unbelievable’, are hosted in Galleria Borghese among a collection of classical Roman sculpture, Renaissance paintings and priceless works by Italian sculptors Gian Lorenzo Bernini and Antonio Canova.Video: Giovanni Grezzi, Elisa Colella/AFPTV/AFP

"So this is the place where this poetry (of Hirst) can be exalted."

Dozens of his works, mostly from his 2017 Venice show Treasures from the Wreck of the Unbelievable, have been placed around the Borghese Gallery's opulent halls, while outside on the terrace, his towering sculpture Hydra and Kali overlooks the citrus trees.

In the entrance hall, a coral-covered bronze of a headless female diver points towards Mariano Rossi's ornate ceiling, a step away from five bronze Disney characters similarly depicted as if recently found on the seabed.

In an adjoining room, Bernini's Apollo and Daphne is surrounded by three Hirst sculptures, each depicting a chained man and woman, in various stages of decay.

In an interview with the Italian newspaper La Repubblica, Hirst said that Bernini "blows my mind" but insisted: "I am not interested in any comparison. 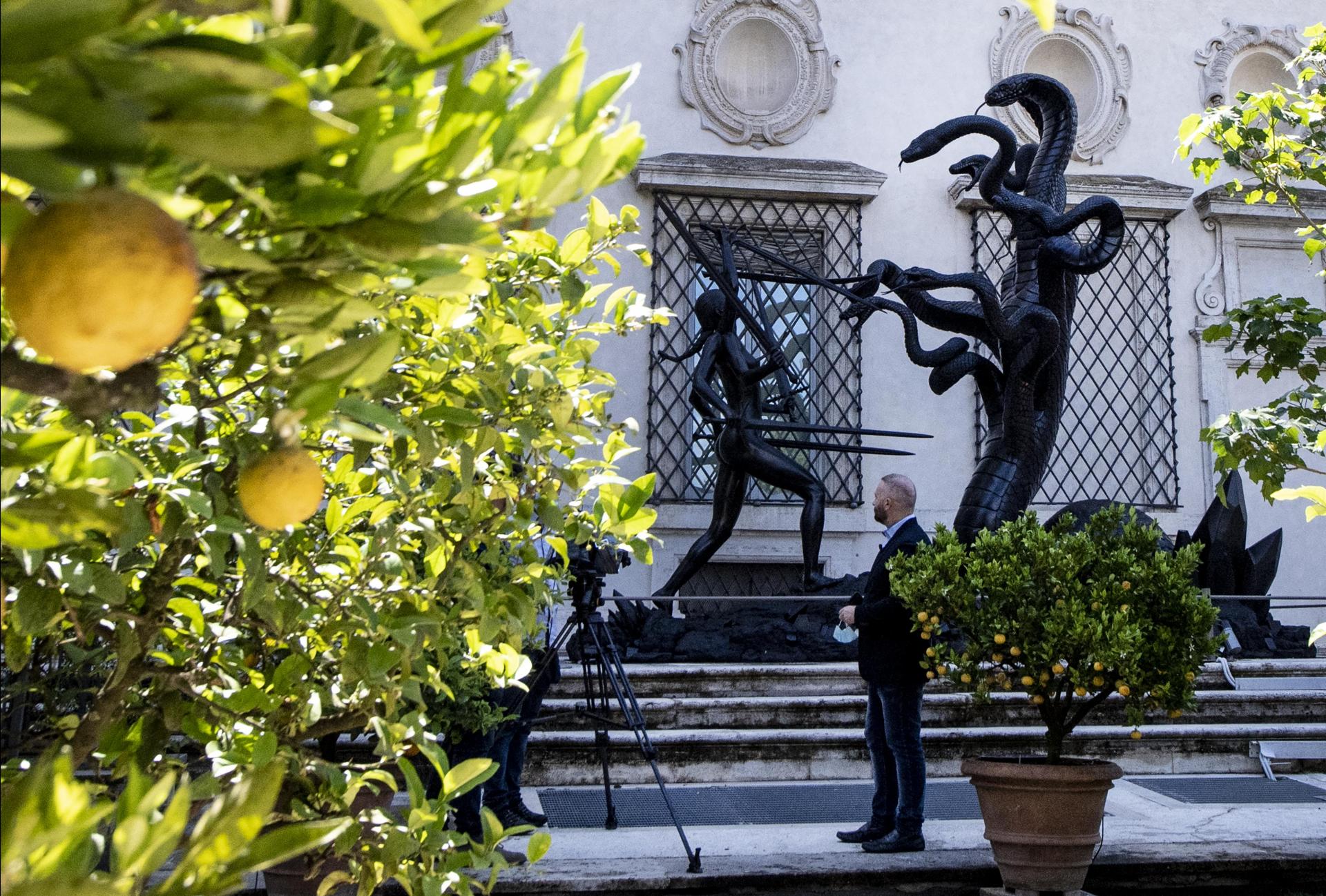 Outside on the terrace, Hirst’s towering sculpture ‘Hydra and Kali overlooks the citrus trees.

Put to him that his Medusas – in gold and silver, malachite and bronze – are on display next to a Caravaggio painting, he added: "If I had to choose between Titian and Caravaggio I would choose Titian.

"The light of Caravaggio is amazing. But I love things that are falling apart, that are corrupted."

The show, named Archaeology Now, runs from Tuesday until November 7.