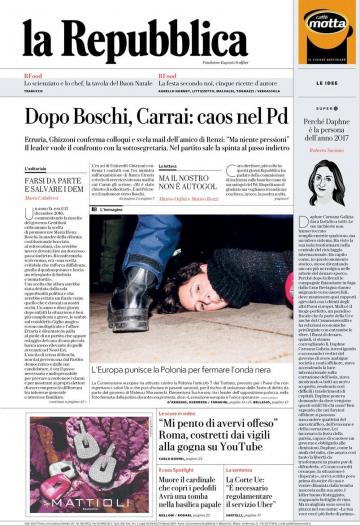 The front page of La Repubblica.

"Daphne Caruana Galizia was a thorn for everybody. Her investigations did not just impact anybody, they impacted an entire system," the paper wrote in a front-page editorial.

Paying tribute, Roberto Saviano wrote: "Daphne embodied the power of speech, able to shake a government... She was killed because she understood the illegal flows of money through Malta and she understood this was not someone doing something wrong but an entire system designed for the flow of dirty money."

Mr Saviano is an Italian journalist and author of international bestsellers Gomorrah who lives under armed escort.

The Maltese journalist was last week also awarded an honorary Deutscher Reporterpreis for Investigative Journalism by Reporter-Forum in Berlin.

Ms Caruana Galizia was killed in a car bomb on October 16.