Convicted hitman Vincent Muscat was told one of the men suspected of supplying the bomb that killed Daphne Caruana Galizia "had the power to bring down government" if he were to be implicated in the murder.

Muscat made the claim in court on Tuesday when testifying against brothers Robert and Adrian Agius, George Degiorgio and Jamie Vella in relation to the murders of the journalist and lawyer Carmel Chircop, two years previously.

The state witness said he had three points to add to the previous day’s testimony, when he had detailed an account of the events leading up to the Bidnija car bomb explosion on October 16, 2017.

He started off by referring to a 2019 visit from a lawyer, whose name was banned under a previous court order, bearing a message from one of the other two alleged hitmen, brothers George and Alfred Degiorgio.

“Tell Censu, wouldn’t it be better if he took some money rather than continue this way?” Alfred had allegedly told the lawyer.

Muscat was also told that Robert Agius “had the power to bring down government if he was implicated in the Daphne Caruana Galizia murder”. 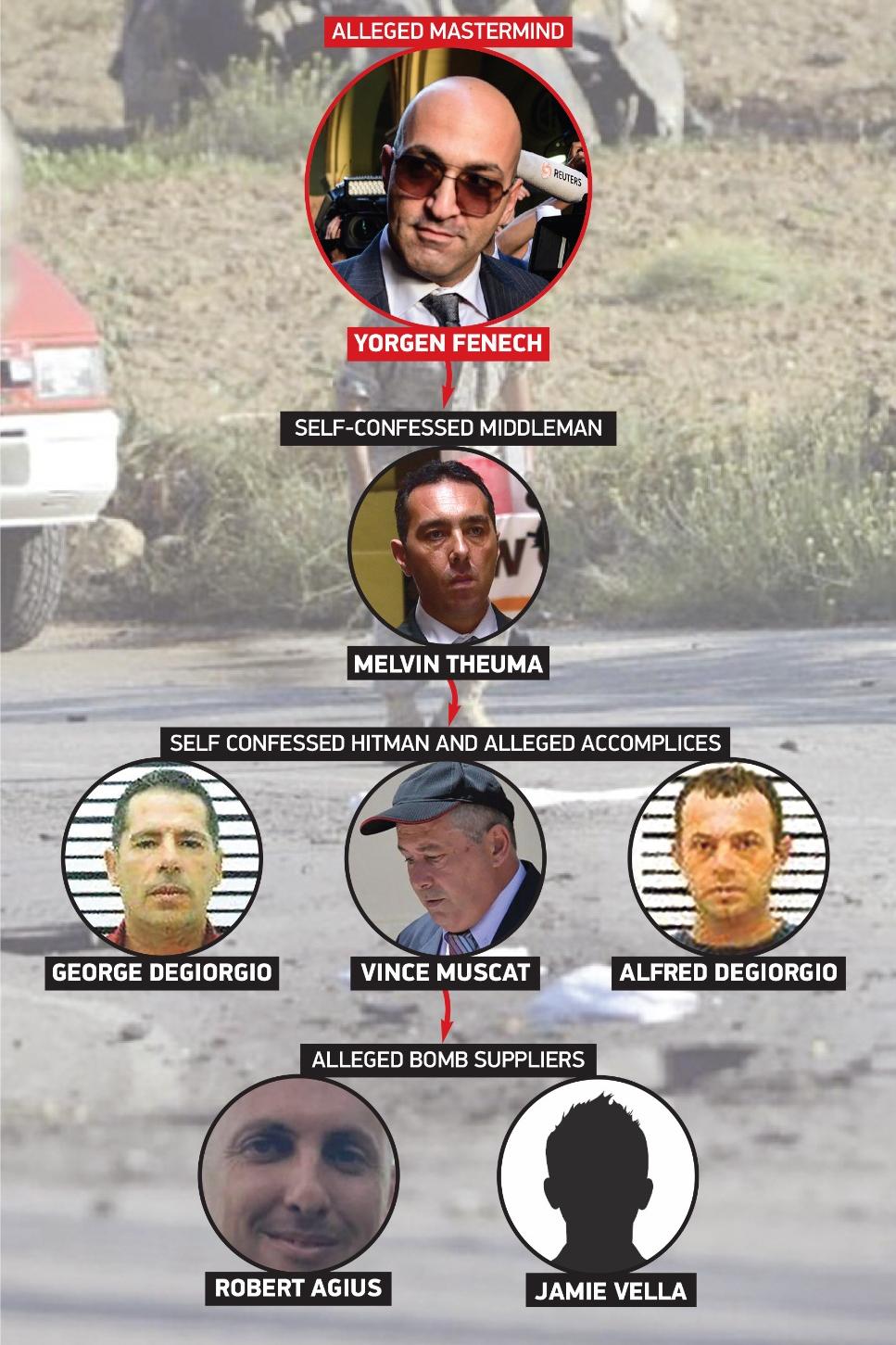 Finally, Muscat made reference to a meeting at police headquarters, around late September 2019, in the presence of lead investigator Keith Arnaud and the unnamed lawyer who had suggested the meeting. The lawyer told Muscat that he “needed to change his version.”

Following this revelation by Muscat, Arnaud himself took the witness stand, confirming that meeting and explaining its background.

The lawyer had told Arnaud that Muscat needed to change his version about Melvin Theuma, who later that year was arrested as the suspect middleman in the Caruana Galizia assassination plot.

He subsequently admitted his role in the murder and was granted a state pardon in exchange for evidence against the three alleged hitmen and also against Yorgen Fenech, the businessman accused of complicity in the plot.

The meeting at the police depot had taken place before Theuma's arrest, at a time when the taxi driver was already “well featured” in the murder probe and police were planning his arrest.

At that time, Muscat had already mentioned Theuma to investigators and had also put forward a request for a pardon.

During that meeting, the lawyer had suggested that Muscat ought to change his version about Theuma, saying that he “owed money” to the middleman and that what he had said previously “was lies.”

Arnaud explained that the lawyer had told him the change was necessary “unless you want my life and that of Vince and our families in danger,” adding that there had been mention of some “killing” or “acid attack.”

But when Arnaud turned to Muscat, sounding him on the matter, Muscat said he wanted to stick to his original version.

Arnaud said the suggestion to change Muscat’s story also did not make much sense since police investigations were indicating otherwise.

Moreover, the lawyer had not said where the threats came from, Arnaud said.

After two days of evidence from Muscat, the court ruled there is enough evidence to indict the four accused over their involvement in both murders.

The case continues on April 29.