“Daphne’s murder happened five years ago but, no matter how you look at it, the story isn’t going away,” says Herman Grech. He is the writer and director of They Blew Her Up, the first play written to address the murder of investigative journalist Daphne Caruana Galizia and the political fallout.

As the fifth anniversary of the murder approaches, Grech’s play is being restaged in Ferrara, Italy, and in Malta this October.

They Blew Her Up, which won Production of the Year in the 2022 edition of Arts Council Malta’s Premju Għall-Arti, is one of the highlights of the International Journalism Festival in Ferrara on October 1 and later at Theatre Next Door in Malta between October 12 and 16.

The play, originally co-produced with Spazju Kreattiv, was staged at KVS in Brussels, Belgium, in May.

The characters in the play represent Daphne’s son (Joe Azzopardi), a journalist (Kim Dalli), a police investigator (Jes Camilleri) and two other characters that are left deliberately mysterious as the case is ongoing, namely the ‘criminal element’ (Alan Paris) and a ‘source’ (Charlotte Grech).

They Blew Her Up is structured around five characters that individually investigate different viewpoints surrounding Daphne and her work, whether sympathetic or unsympathetic to her particular brand of journalism.

Grech wanted to especially zero in on the cover-up and the way the ‘system’ ultimately killed a journalist.

“The justice system in Malta moves at a snail’s pace and, unfortunately, we’re not going to be seeing the end of this case any time soon,” says Grech, who is also editor-in-chief of Times of Malta.

“I think it would be tragic if this country dismisses this murder as a blip in our history. This is quite possibly one of the most important stories of our generation,” says the playwright, adding that we should learn from the fact that some people try to cover up for the perpetrators.

“I really want to give a snapshot of what really happened, both through the investigations we carried out as journalists and also through what came out of the court testimony and anecdotes I got from my own investigations while researching the play,” he continues.

“This is not a play written to turn Daphne into a hero,” Grech emphasises.

“The character of the journalist in the play is actually critical about what Daphne stood for, so this isn’t some adulation of Daphne as some people are trying to portray it – it isn’t.”

The play’s upcoming performance in Ferrara will be its second international performance following the performance at KVS Theatre in Brussels last May. The play is being restaged in Malta as a result of popular demand, especially after the last five shows were cancelled because of COVID restrictions.

Asked about the play’s wide-ranging appeal and how the story of They Blew Her Up extends beyond our shores, Grech says he didn’t immediately consider the international dimension of the story when he was writing the play.

“When we first staged the play in Malta in 2021, we had filmed it because of the COVID pandemic. International journalists watched the online version and that is how interest in it came about.

“They contacted me and said I have to take the play abroad because this story resonates all over Europe,” he says.

Grech secured KVS Theatre also with the help of the Association of European Journalists and Arts Council Malta.

“The response was pretty overwhelming. We played two sold-out nights and had a Q&A together with Daphne’s son Matthew after; the level of engagement from the audience members was quite incredible.”

Speaking about what makes the play so striking for so many people, Grech says that, while the subject is Maltese and the location is Malta, “the attacks against journalists happens everywhere”.

“Several journalists have been killed since Daphne was blown up. We simply can’t accept this as some sort of job description. And the attacks need not be violent, journalists are being attacked in different ways,” says Grech.

“It is in the interest of despots to portray journalism as something outdated or as something we don’t need today.  Trumpism is alive and kicking; statements like ‘alternative facts’ and ‘fake news’ are being bandied about. Little do we realise the implications of a world without investigative journalists.

“I want to use the play as an alarm as to the threat journalism is facing at the moment and that we need to be very careful not to let journalism be overrun by politicians in whose interest it is to kill it,” he says.

The message seems to have come across and after watching the Brussels performance, an international NGO is seeking funding to potentially help tour the play next year across eight EU countries. 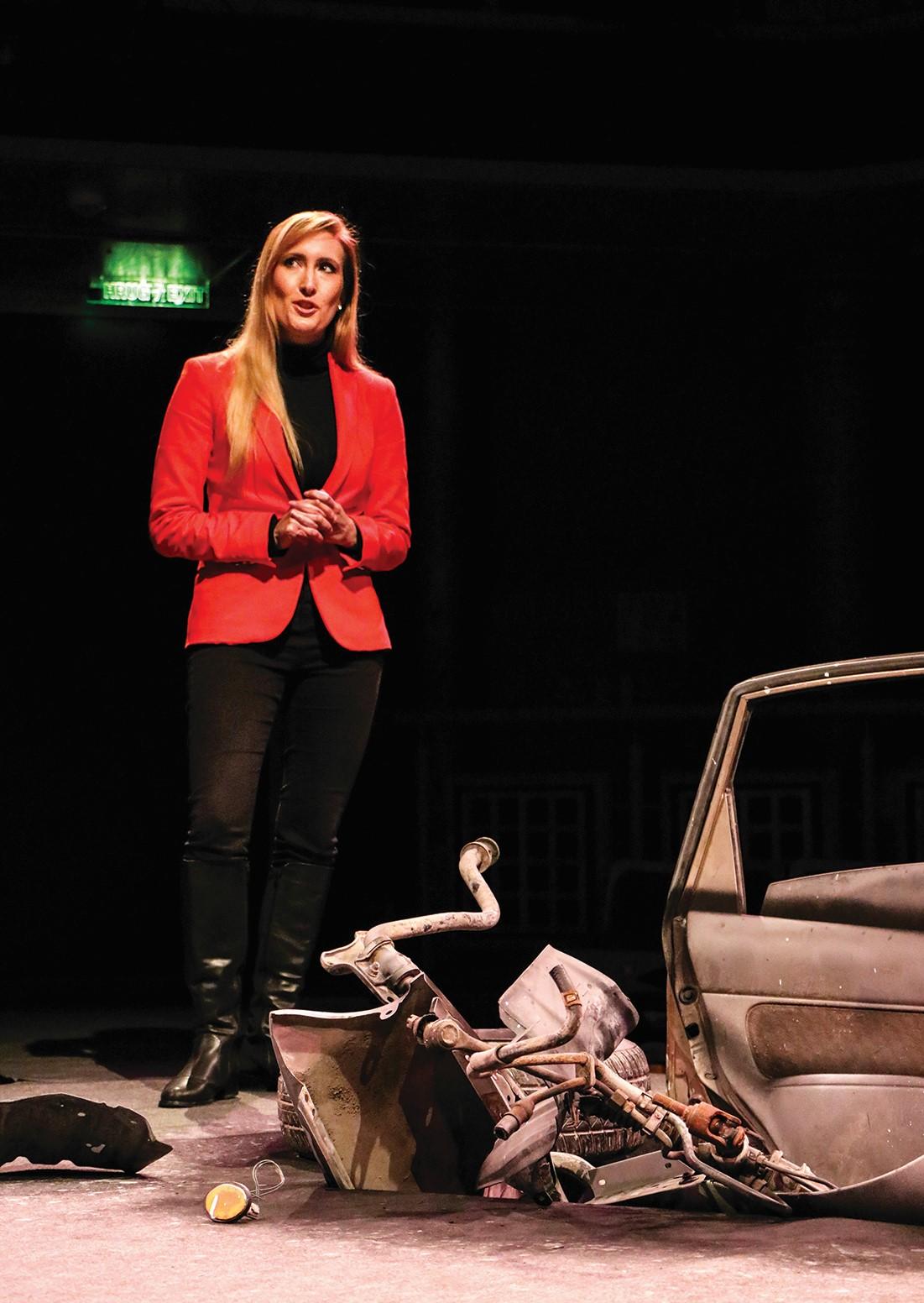 Kim Dalli plays a journalist who is critical of Daphne Caruana Galizia.

Iż-żejt jitla’ f’wiċċ l-ilma (truth will prevail in the end) is a Maltese proverb often invoked when Daphne’s story is elicited. Asked whether this phrase holds true in his estimation, Grech says this is true “to a certain extent”.

“There are always crooks who manage to get away and keep getting away because of flaws in the system. But we all need to do our part to try stamp that out.”

After the avalanche of bad news marring the headlines as of late, many people are unfortunately switching off, says Grech, but he believes that art and theatre in particular are a means to continue telling the stories that affect us from day to day.

“I want to keep reliving the important stories of our generation through a different platform especially when people are tired of reading the headlines. And theatre gives you a captive audience. If we stop telling these stories, then we are really digging our heads in the sand.”

See internazionale.it/festival for more details on the upcoming production of They Blew Her Up in Ferrara, Italy, this October 1. Visit tnd.com.mt/whats-on/they-blew-her-up for details on the play’s re-staging at Theatre Next Door from October 12-16.