Updated at 10.20pm with government statement

An Opposition MP demanded answers following Daphne Project reports that a man once suspected of fuel smuggling called minister Chris Cardona and one of the men accused in Daphne Caruana Galizia’s murder.

Speaking in Parliament, Nationalist Party MP Jason Azzopardi relayed reports published on Italian news site La Repubblica that the alleged fuel smuggler phoned Dr Cardona after holding a conversation with the slain journalist, around a year before her death.

Dr Azzopardi said the same caller was also in contact with Alfred Degiorgio, one of three suspects arrested and charged with the October 2017 car bombing.

He slammed Prime Minister Joseph Muscat for failing to act against his cabinet minister.

"Prime Minister, you had a minister who has a structured relationship with someone in the criminal underworld, yet you do nothing," Dr Azzopardi said.

Dr Azzopardi said the government acted as if it were normal for a minister to have a “rapport” with a figure from the criminal underworld.

According to a source briefed on the magisterial inquiry, there is no evidence to link Dr Cardona to the murder, or any wrongdoing.

Mr Degiorgio stands accused of carrying out the car bombing together with his brother George and Vince Muscat. 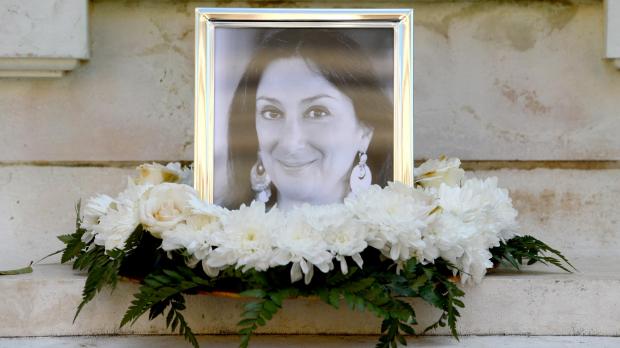 When asked about the call links by the Daphne Project, a spokeswoman for Dr Cardona dismissed the questions as “absurd” and “sensationalist”.

In April, the Daphne Project spoke to two witnesses who confirmed that Dr Cardona frequented Ferdinand’s bar in Siġġiewi.

One eyewitness told undercover journalists that Dr Cardona had spoken to Alfred Degiorgio at the bar, one month after the assassination.

Dr Cardona had told the Daphne Project that he did not “recall” ever having any conversations with any of the three murder suspects, and definitely never had any meetings with them.

Several eyewitnesses have also testified before the inquiring magistrate, confirming that Dr Cardona was present at a bachelor’s party in June 2017, which was also attended by Alfred Degiorgio.

A sign outside the secluded Fawwara party venue carries an image of a pistol and reads: “There is nothing here worth dying for”.

Replying to questions put to him by the Daphne Project about the party, Dr Cardona insisted he had already stated all he had to say about what he described as the "heinous murder" of Ms Caruana Galizia.

“I understand the victim’s family’s, and indeed the public’s, want for answers, but attempting at all costs to make the public believe that there was any type of involvement from my end is purely absurd and unjust, and will definitely not help investigations, nor will it lead to further answers – but will merely fuel the sensationalism surrounding such a barbaric act to the detriment of the public and the investigation itself”, a spokeswoman for Dr Cardona said.

In an official statement issued on Monday evening by his ministry, Dr Cardona said "these smears are highly damaging and false".

The minister said international media was speculating and "falling in to the trap of Maltese partisan politics".

He urged all journalists to pass any relevant information they might have about Ms Caruana Galizia's murder to authorities "rather than leave it for further stage-managed 'revelations'".

"I, of course, remain available to the authorities at all times," Dr Cardona added.

The Economy Minister was a frequent subject of Ms Caruana Galizia’s writing.

Ms Caruana Galizia died without having access to her bank accounts after Dr Cardona asked a court to freeze the journalist’s assets following a story placing him at a brothel in Germany.

Despite vehemently denying the brothel allegations, both Dr Cardona and his aide Joe Gerada failed to pursue legal action following her death.

Ms Caruana Galizia’s lawyers had successfully petitioned the court to retain call data that would have pinpointed the two men’s’ precise location on the night in question.

The logs will not see the light of day after Dr Cardona and Mr Gerada dropped the libel cases.

MEP David Casa pounced on the allegations, saying it was becoming “painfully clear” why the government was resisting calls for a public inquiry into the murder.

In a letter to European Commission first vice-president Frans Timmermans, Mr Casa expressed “great concern” about the claims that Dr Cardona “met with the low-level assassins... both before as well as after the assassination”.

He urged Mr Timmermans to “urgently address” calls for a public inquiry into the car bomb assassination.

“The European Commission must insist that it takes place,” he wrote.

In a statement issued late on Monday, the government said it could not ascertain the veracity of claims made concerning Dr Cardona.

"The executive has no oversight, or control, on the independent judicial process," the statement read.

Such an investigation, the government argued, would duplicate work conducted by current ongoing investigations, which according to media reports was already part of investigations".

Do you want to share information with us, securely and anonymously? Visit: https://www.timesofmalta.com/services/secure_news_tips