When Nicole Kidman won her Oscar for her performance as Virginia Woolf in the sublime The Hours in 2003, there seemed to be as much focus on the prosthetics used to recreate the dominant nose of the famed author for the actor as on her performance itself. So who knows (or should that be ‘nose’?) what people will say when they get the first glimpse of the actor in Destroyer? Kidman is utterly unrecognisable as LAPD detective Erin Bell whose life has been blighted by her involvement in an undercover operation some years earlier.

When still a relatively young police officer, Bell is recruited by the FBI to work alongside Chris, (Sebastian Stan), a seasoned agent. The two are tasked with infiltrating a criminal gang led by the charismatic but exceedingly dangerous Silas (Toby Kebbell). Their infiltration is successful, they are embraced by Silas and his comrades and include in Silas’s plans to rob a bank. Yet it all goes terribly wrong. People are killed and life for Erin changes irrevocably.

Flash forward a few years, and Erin is still on the force, yet she is now a broken woman. She seems to sleepwalk through life. Often under the influence of something or other, she stumbles through work, is marginalised by her peers while her private life is in shambles. She is trying to raise her rebellious teenage daughter while struggling to maintain a semblance of relationship with her ex-boyfriend Ethan (Scoot McNairy).

Yet when Bell receives an ink-stained bank note anonymously – an ominous symbol of that ill-fated heist – she realises that Silas is back, and she is determined to hunt him down and bring him to justice once and for all... and hopefully come to terms with her own past mistakes in the process.

Set in the seediest sides of Los Angeles, a far cry from the glamour we often associate with the City of Angels

Destroyer is a dark and oftentimes difficult thriller to watch, fuelled by a grim and gritty turn from Kidman. Once you get over the shock of her appearance – her unruly grey hair, haunted black-rimmed eyes, a gaunt image, basic clothing choices and unsteady gait successfully illustrating a woman on the verge of a very nervous breakdown – you are immediately drawn in to her tragic and challenging story as Kidman channels anger, desperation, a thirst for revenge and indeed, seems to embody the title as she inexorably heads to self-destruction both professionally and personally.

Bell is unable to interact with others, be they her work partner, former boyfriend or her daughter, who she seemingly tries to protect but is horribly ill-equipped to do so. It is a compelling tour-de-force from the actor – nuanced, layered, unflinching in the face of the character’s unlikability as she unconsciously charts her course to redemption – and a reminder that she in one of the most exciting actors of her generation.

The film is set in the seediest sides of Los Angeles, a far cry from the glamour we often associate with the City of Angels. Kusama takes us to the side of the city inhabited by demons – ugly, colourless, teeming with unpalatable characters, hiding lord know what underneath, yet it is ironically a world Bell is comfortable in.

It is her territory and serves as the perfect backdrop for her to stage her revenge as she tracks down Silas via his lawyer Di Franco (Bradley Whitford, enjoying the smarminess a bit too much), who doesn’t take Bell seriously until she really shows him her belligerent side, and former gang member and Silas’s lover Petra (the ever-reliable Tatiana Maslany). The story from a script by Phil Hay and Matt Manfredi is awash with intense dialogue and fascinating narrative. It is told via an elaborate but never gimmicky structure of flashbacks as Bell flashes back to her past and present. It is refreshingly directed by a woman, Karyn Kusama, who helms with a steely hand, never holding back from the ugliness presented by both the hard-hitting story and her lead character. 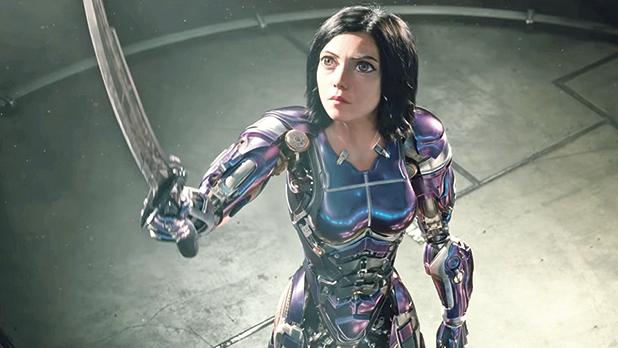 Alita: Battle Angel (Class 12A) – Set several centuries in the future, the abandoned Alita is found in the scrapyard of Iron City by Ido, a compassionate cyber-doctor who takes the unconscious cyborg Alita to his clinic. When Alita awakens, she has no memory of who she is, nor does she have any recognition of the world she finds herself in. As Alita learns to navigate her new life and the treacherous streets of Iron City, Ido tries to shield her from her mysterious past.