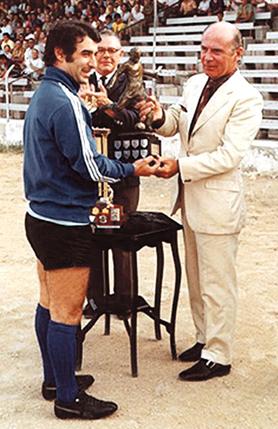 Edward Darmanin receiving the Footballer of the Year Trophy in 1972 from Lawrence Xuereb, the Malta FA president at the time.

When, on February 22, 1975, Malta faced Greece at the Gżira stadium, the locals rose to the occasion and two fine goals by Ritchie Aquilina and Vince ‘Maxi’ Magro gave the country a historic victory.

It was a deserved win and one which the Maltese had craved for a very long time.

I still remember vividly the scenes of joy at the end of the match and the enthusiasm of the players as they were interviewed by the late Frankie Camilleri for Malta Television.

After this victory, many were hoping that the game in Malta would start to improve. The future seemed bright and rosy but, alas, these hopes were soon dashed.

The following January, things were back to normal when Malta lost heavily against Greece and Bulgaria.

The home game against Bulgaria, in particular, was a real nightmare.

We only lost 2-0 but the game was a huge disappointment. It is true that the national team was depleted with the absence of Louis Arpa and Raymond Xuereb besides suffering second-half injuries to Sunny Gouder and Magro but these were not valid excuses for the team’s poor performance.

After the great game Malta had played against Greece, the crowd of 8,000 that braved the inclement weather expected their favourites to produce another afternoon of great football. However, they returned home disappointed.

The majority of the team played well below par and it was only in defence that there was any semblance of collective play.

It was here that centre-half Edward Darmanin stood out above all others. His calmness and experience saved the side from many dangerous and awkward situations. However, his great contribution was not enough.

It was in midfield that the Bulgarians showed their superiority.

Bonev blotted Willie Vassallo out of the game and the only man who showed any initiative in this key sector was Edward Aquilina who sprayed around some useful passes.

Bulgaria created several scoring chances but many of them were thwarted by the excellent Darmanin.

Their best player was midfielder Bonev but Panov also had a good game. In fact, it was this player who opened the scoring as early as the eighth minute.

This game, however, must be chalked in red in Darmanin’s form book.

Born in Sliema on November 15, 1945, he was brought up in Vittoriosa but started his playing career with St George’s. He made his league debut for St George’s on September 30, 1963 against Valletta.

St George’s could not hold on to such a hot prospect and after two years with the Saints, Darmanin joined Hibs who put him straight into their first team.

Surprisingly, Hibs failed to realise his full potential, otherwise they would never have let him slip out of their grasp. In 1965, Darmanin fulfilled his childhood dream by joining Sliema Wanderers.

It was a move he never regretted. The Blues pulled him back into the heart of the defence and between 1965 and 1977, Darmanin established himself as the best centre-half on the island.

In 1966, Darmanin joined the RAF. He spent the first six months of the year in the United Kingdom, thus missing most of the 1966-67 season.

Back in Malta at the start of the 1967-68 season, he won back his place in the Sliema defence.

At the time, the Wanderers were going through a golden period in their history. With players of the calibre of Joe Cini, Robbie Buttigieg, Ronnie Cocks, Joe Aquilina, the Falzon brothers and, of course, Darmanin, the Blues just could not go wrong.

It was a memorable period for Darmanin during which he won four league championships and three cup medals.

An automatic choice for the national team, Darmanin won 29 full caps. He was also team captain on six occasions. In 1977, he joined Qormi FC as player-coach and helped his new club win promotion to Division One.

The next season Darmanin played 11 times for the first team but in February 1979 he retired from competitive football and stayed in the game as coach.