A Maltese couple being considered for canonisation “loved everyone, whether a beggar or a bishop, and did not hold any grudges”, according to their only child.

“They would return unkindness with generosity and tell me to do the same,” Sr Cecilia Mary Casolani told The Sunday Times of Malta.

Sr Casolani, 69, was contacted after her parents’ case was raised during the Prefect of Congregation of Saints at the bishops’ synod in Rome.

The couple, Inez and Henry Casolani, are being considered for sainthood for their “united love towards God and living their lives according to the teachings of Christ”. Gozo Bishop Mario Grech said the process has still not started but a request has been made to look into the case.

When people asked them how they were going to let go of me, they replied they would not stop my vocation

Sr Casolani, currently at the convent of the Suore di San Giuseppe Di Apparizione in Rome, was aware of the request.

Research about the couple kicked off 14 years ago. Stephanie Quintano documented testimonials from over 200 people and collected the couple’s writings. Her husband Anton, a historian, wrote their biography in 2004. In 2010, the Vatican sent a nihil obstat, or approval of ecclesiastical authority, to look into the case. 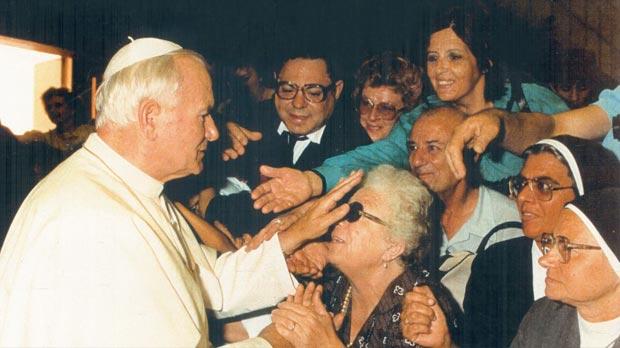 The biography relates several acts of kindness and generosity. In one case cited, Ms Casolani visited an ill person who had previously been unkind to her. The show of forgiveness left such an impact on the woman that when Ms Casolani passed away, she asked for one of her rosary beads.

Another incident recalls the unexplainable healing in 1992 of Mr Casolani’s blindness, caused by diabetes. The healing took place on December 29, the day marking Blessed Addeodata Pisani’s birth, of whom Mr Casolani was a devotee. Mr Casolani died on the exact same day seven years later at the age of 82.

According to the Quintanos, Mr Casolani will always be remembered for their love for the Eucharist and effort to foster peace.

A student of renowned artist Edward Caruana Dingli, Mr Casolani gave up an art scholarship because he had already met his future wife. Following his secondment with the Royal Army Medical Corps during the Second World War, he worked with the Public Works Department where every morning he would gather his colleagues for prayer.

Meanwhile, a qualified teacher, Ms Casolani stopped working at school when they married in 1944, and instead taught children of families in need for no fee.

Ms Casolani died at the age of 76 and her last written statement, found on a notebook on the bedside table read “I take record of God… in Thee I have had my earthly joy”.

Following their death, people claimed they received graces after praying through the intercession of the couple. A premature baby who the doctors said would not live and who has grown into a healthy boy, is among the cases mentioned.

Despite their kind nature, they were still disciplined with their children. “They were strict with me. My mum would scold me with tears in her eyes, telling me she had to be cruel to be kind,” Sr Casolani recalled.

“They were extremely generous and when people asked them how they were going to let go of me, they replied they would not stop my vocation,” said their daughter, who became a nun when she was 19.