Some 110 metres underwater off the coast of Xlendi Bay there lay, for centuries, an archaeological treasure that is now warming the cockles of archaeologists and historians.

Unearthed in an expedition that was far from your ring-lost-in-the-sand search, the mesmerising shipwreck clasps intriguing artefacts dating back to 700 BC, knowing their origin to Phoenician traders.

And for the first time on these islands, a selection of the artefacts – from what Heritage Malta describes as the oldest wreck ever found in this region – are on public display, at the Cittadella in Gozo.

“This exhibition is another jewel in the Cittadella’s crown,” said Timmy Gambin, from the University of Malta, the man who led the search.

Speaking to The Sunday Times of Malta, Prof. Gambin said the exhibition was not the end of the years’ long excavation and research. Over the coming years further information and more artefacts would throw additional light on that period of the island’s history.

Gozitan historian George Azzopardi said this was no ordinary exhibition. “First, we’re dealing with an underwater excavation where the context is extremely difficult to study. Second, the wreck was found undisturbed, which is utterly rare.”

There were at least two reasons why this archaeological discovery could be called a ‘treasure’, said Dr Azzopardi.

“One is its massive size. We’re not talking here about a single object but about a whole wreck. Two, it looks like the wreck is the oldest from the Classical period ever found in the Mediterranean.”

A depth of 110 metres is hardly the average ventured by researchers and divers. This makes the expedition stand out compared to others carried out in the Mediterranean and around the world. 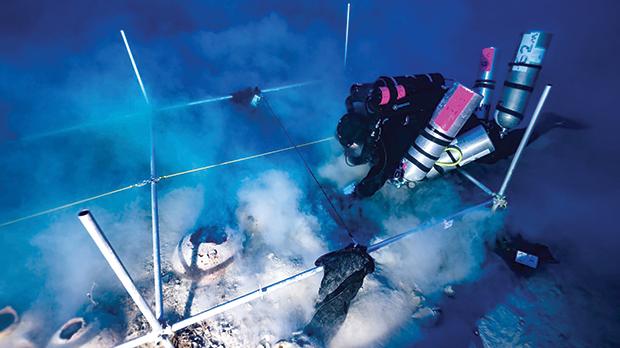 The exhibition also highlights some of the innovative techniques that were used in the project. They include methods used to recover some of the artefacts, some of which were previously unknown to the historical record.

How did he feel about diving so far down to scour the seabed? Such tasks, he replied, did not allow time for emotions.

“At that depth we only have 12 minutes to work. If we stop for one minute to observe the scenario we would lose one twelfth of the time allowed on the seabed.”

Visiting the exhibition, one gets the feeling one is diving off the cliffs in Gozo. Audiovisual aids and graphical interfaces inform visitors about the value of the project and how researchers managed to pinpoint the X mark at such depths in the open sea.

During the first week of opening, about 500 visitors have taken a curious look at what the Phoenician ship was carrying in its hold.

A Polish couple at the exhibition said: “It’s quite fascinating to note that we struggled to find Malta on the map while planning to come here, and now we’re fascinated how historically pristine these islands are.”

The results being obtained from Prof. Gambin’s research will form part of the Gozo Museum that is in the pipeline, a collaboration by Heritage Malta and the Ministry of Gozo.