A deficit of €316.3 million has been recorded in the third quarter of 2020, the National Statistics Office said.

The NSO said that between July and September, total revenue stood at €1,116.8 million, a decrease of €92.5 million when compared to the same quarter in 2019.

Decreases in revenue were primarily due to the impact of the COVID-19 pandemic, with the largest being taxes on production and imports (€86.7 million), followed by market output (€13.5 million), current transfers receivable (€7.7 million) and current taxes on income and wealth (€6.3 million). 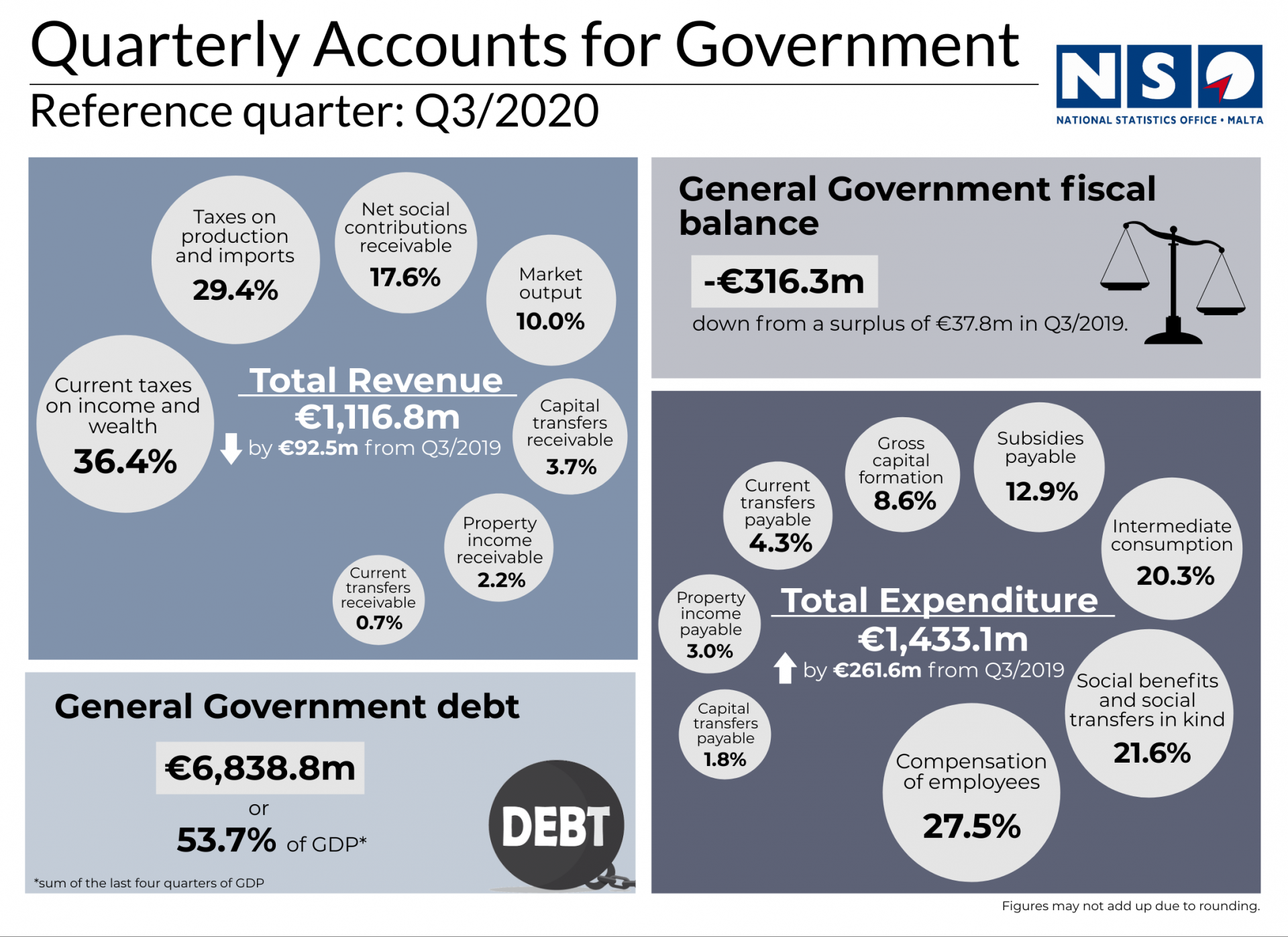 Total expenditure in the third quarter amounted to €1,433.1 million, an increase of €261.6 million over the corresponding quarter in 2019.

In contrast, when compared to the corresponding quarter in 2019, current transfers payable and property income payable registered a decrease of €15.4 million and €3 million, respectively.

To achieve compliance with the provisions of ESA 2010, adjustments to the consolidated fund data were made.

In the third quarter of 2020, these adjustments brought about an increase of €73 million to the consolidated fund deficit.

In relation to financial transactions in assets, during the third quarter, currency and deposits and long-term loans registered a decrease of €36.9 million and €19.7 million respectively, followed by other accounts receivable (€8.8 million) and short-term loans (€1.6 million).

Considering the financial transactions in liabilities, the highest increase was recorded in long-term debt securities (€212.1 million), followed by other accounts payable (€101.7 million) and currency and deposits (€93.7 million).

The debt-to-GDP ratio stood at 53.7% of GDP1. This increase was largely reflected in central government debt, which amounted to €6,835.6 million.

This includes the euro coins issued in the name of the Treasury, considered a liability of central government, and the 62+ Malta Government Savings Bond, the latter amounting to €382 million.

Local government debt stood at €3.3 million. General government guaranteed debt amounted to €1,108.8 million at the end of September 2020, equivalent to 8.7% of GDP1. Compared to the third quarter in 2019, there was an increase of €39 million.