Fifteen years ago, the Maltese art scene witnessed the ascent of a young artist from anonymity to notoriety. Shaun Grech discusses with Joseph Agius the reasons for his long absence from exhibiting and the concept behind his current exhibition. 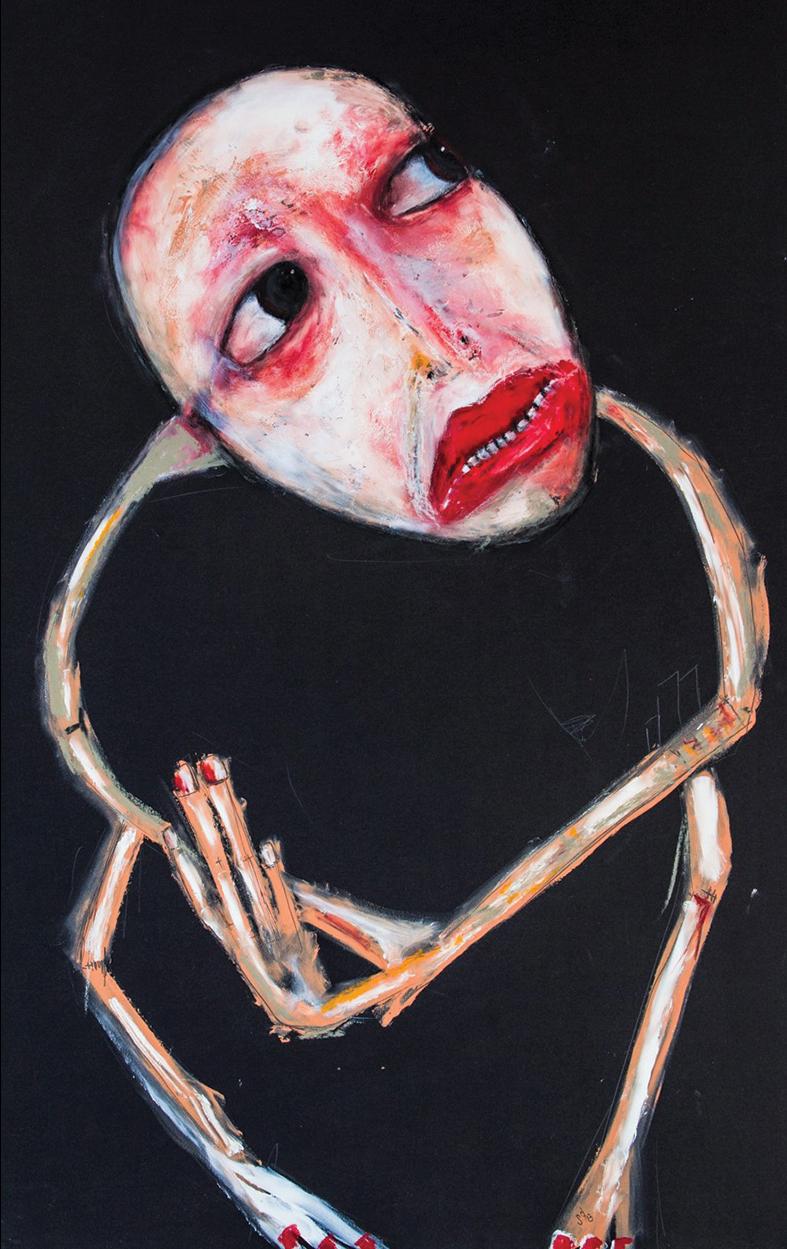 Some artists go into hibernation within the confines of their studios, others take time off as they feel they are creatively spent and have nothing left to contribute. Others still, like Shaun Grech, consider art as an organic creature, not necessarily governed by any strict rules of artistic production under the guise of self-discipline. For Grech, creativity occurs when it has to.

“I wasn’t in Malta for many years, I was residing in the UK. I left to do my PhD; I started to work at the university in Manchester. However, I still kept on painting. Part of me has given up on the whole exhibiting thing. I go through phases when I regard the whole thing as rather pointless and a spectacle of pseudo-narcissism. 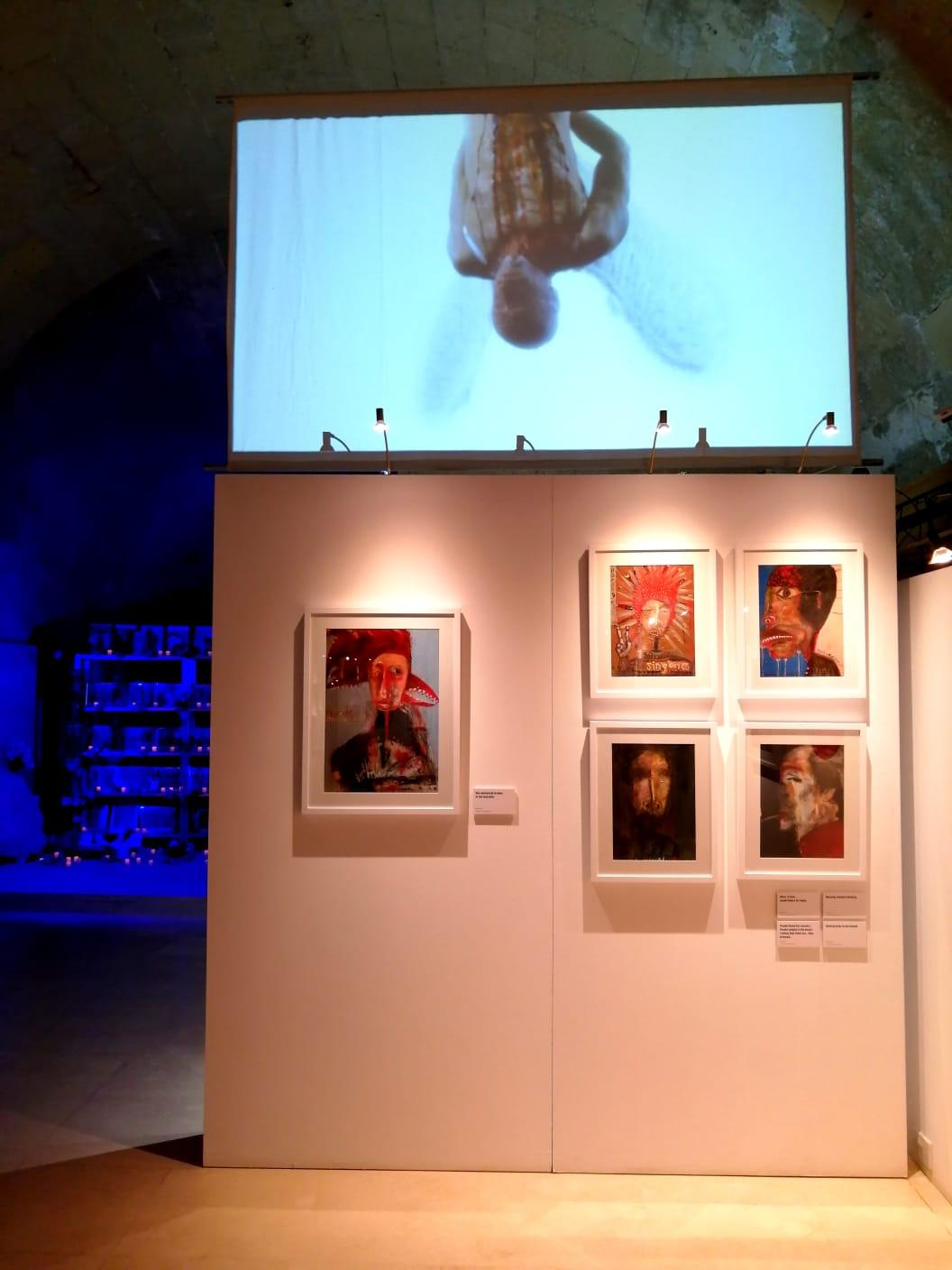 “I kept on painting as a necessity in a certain way. I’m not a disciplined artist who can go to his or her studio to spend two or three hours a day. Either it comes or it doesn’t come. If it doesn’t come, this would be for a very long period of time,” remarks Grech, with a snigger that suggests that he enjoys the luxury of not taking himself too seriously.

Two exhibitions in quick succession by a yet relatively unknown young artist had shot Grech to fame. The first one in 2004, at Mosta’s Last Touch Gallery, was followed within a relatively short timeframe in 2005 by another exhibition hosted in a dilapidated old house in Valletta. 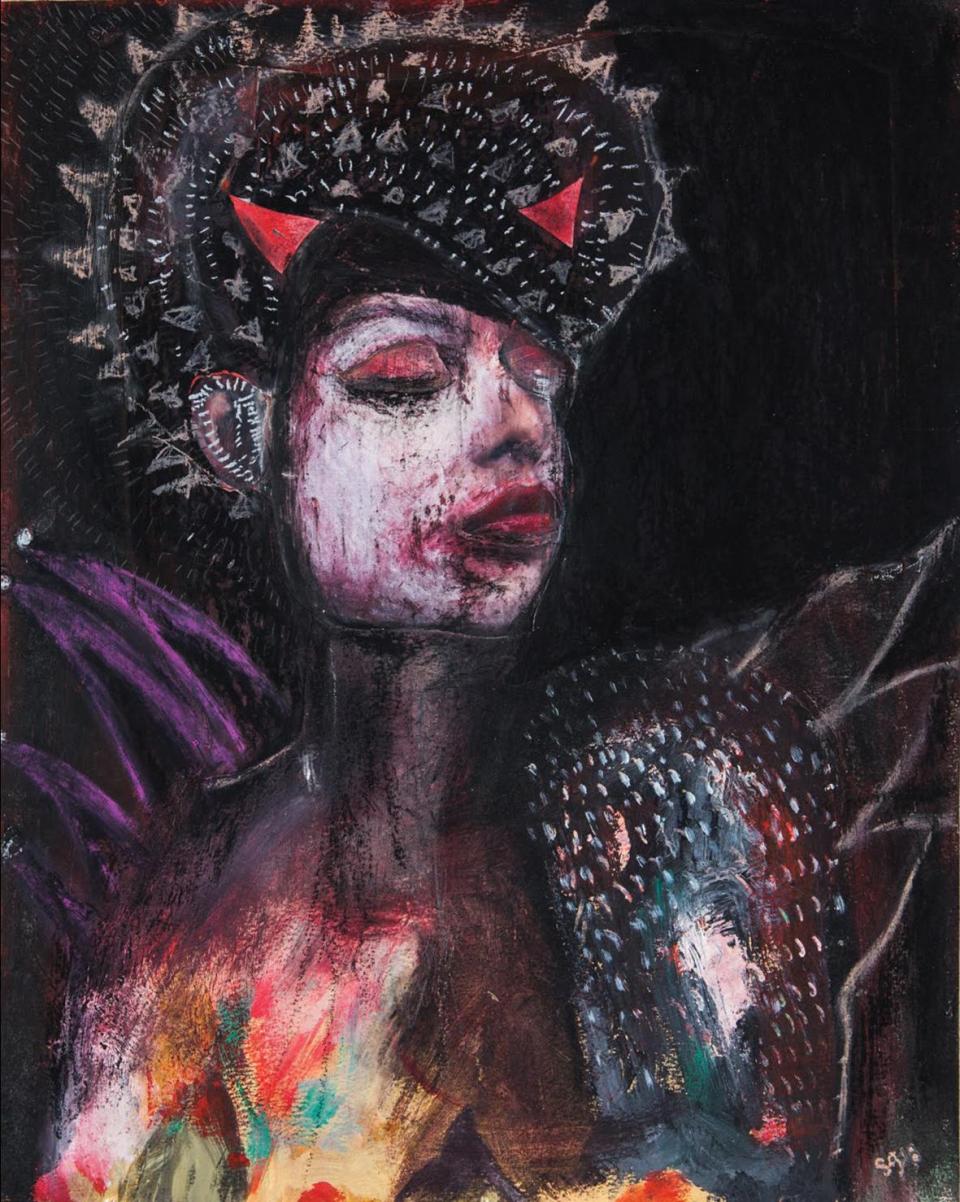 The Last Flight of Tecun Uman or The Rise of The White Savage.

A retinue of dystopian characters, nodding to the oeuvres of Jean Dubuffet and Chaim Soutine, were the protagonists of both exhibitions. Through them, the then young artist narrated grim tales of ostracisation, decadence and decrepitude.

The venue of the second exhibition lent itself more to the mood of general dejection permeating the grimacing characters; the old crumbling Valletta house had its own ghost stories too.

Many were those who saw this meteoric rise to notoriety by an artist so young as a shape of things to come. But Grech, never one to be shackled by notions of artistic ambition, embarked on an academic path that took him away from these shores. 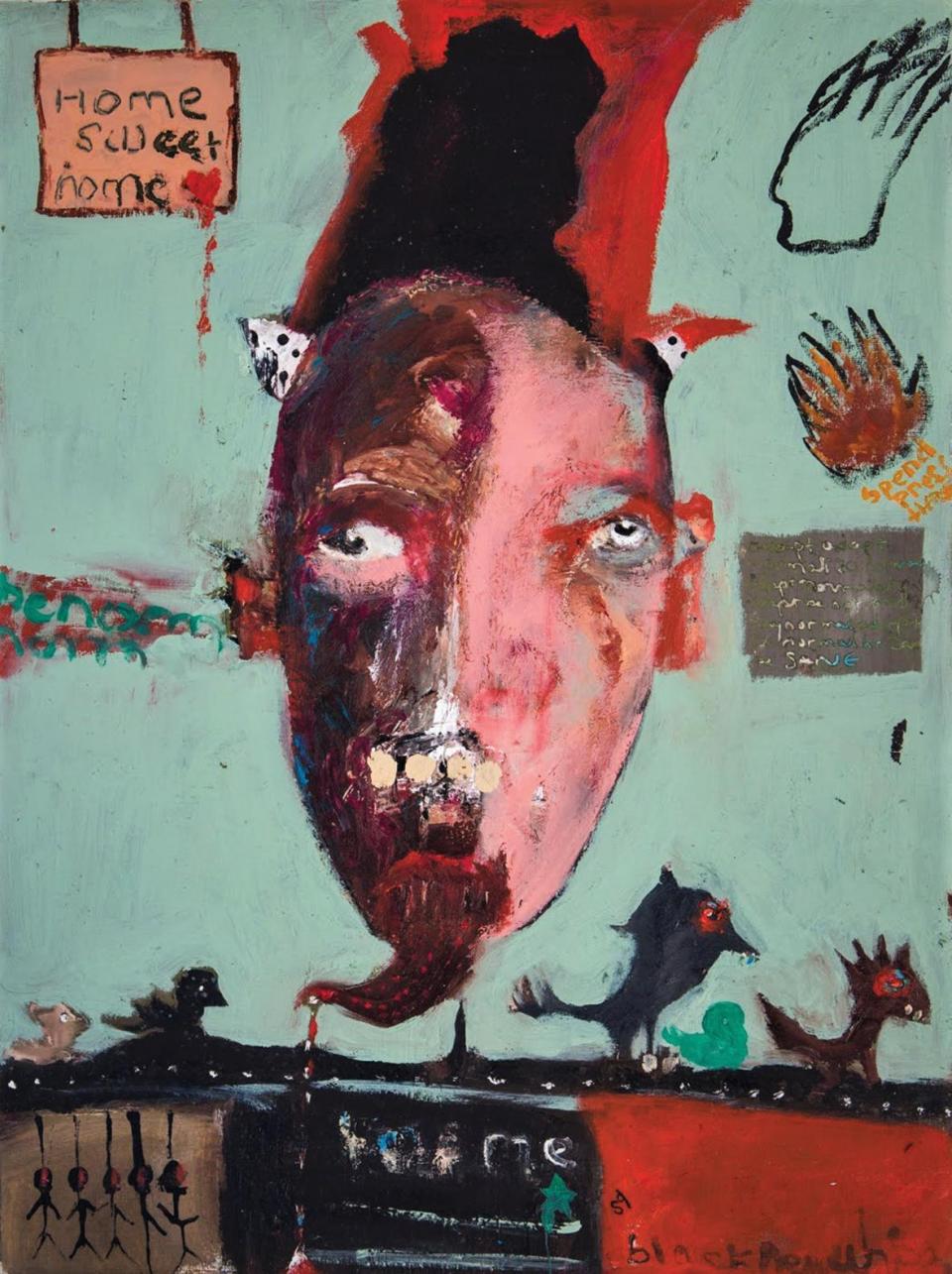 Go Back to Your… Phone?

Dehumaneation brings together 15 years of work, bridging the elapsed time since Grech’s last exhibition in 2005. Grech admits that the cocktail of hopelessness and vulnerability of the two previous exhibitions has inexorably trickled down to this present exhibition. The world hasn’t changed that much in the meantime: wars are still being waged, racists still chant their empty slogans and refugees still dream of a shore to salvation.

He declares: “The work has retained a lot of grit. That is who I am. There is a sense of defeat in my works but there is also a hope. I have hope in the younger generations, notwithstanding that we are living in such dystopic times. What would have been the outcome if younger people were allowed to vote in the Brexit referendum?”

He insisted that he wouldn’t be doing what he does if he felt the situation was entirely hopeless. “I admit that there is a lot of darkness weaved into the work. I perceive a lot of things as a race to the bottom in a celebration of ill-fact or no fact. Screw facts altogether, screw science, the rise of the far-right, populist policies, extraordinary racism. Mine is as an act of resistance in the face of such discourses of hate speech on social media.” 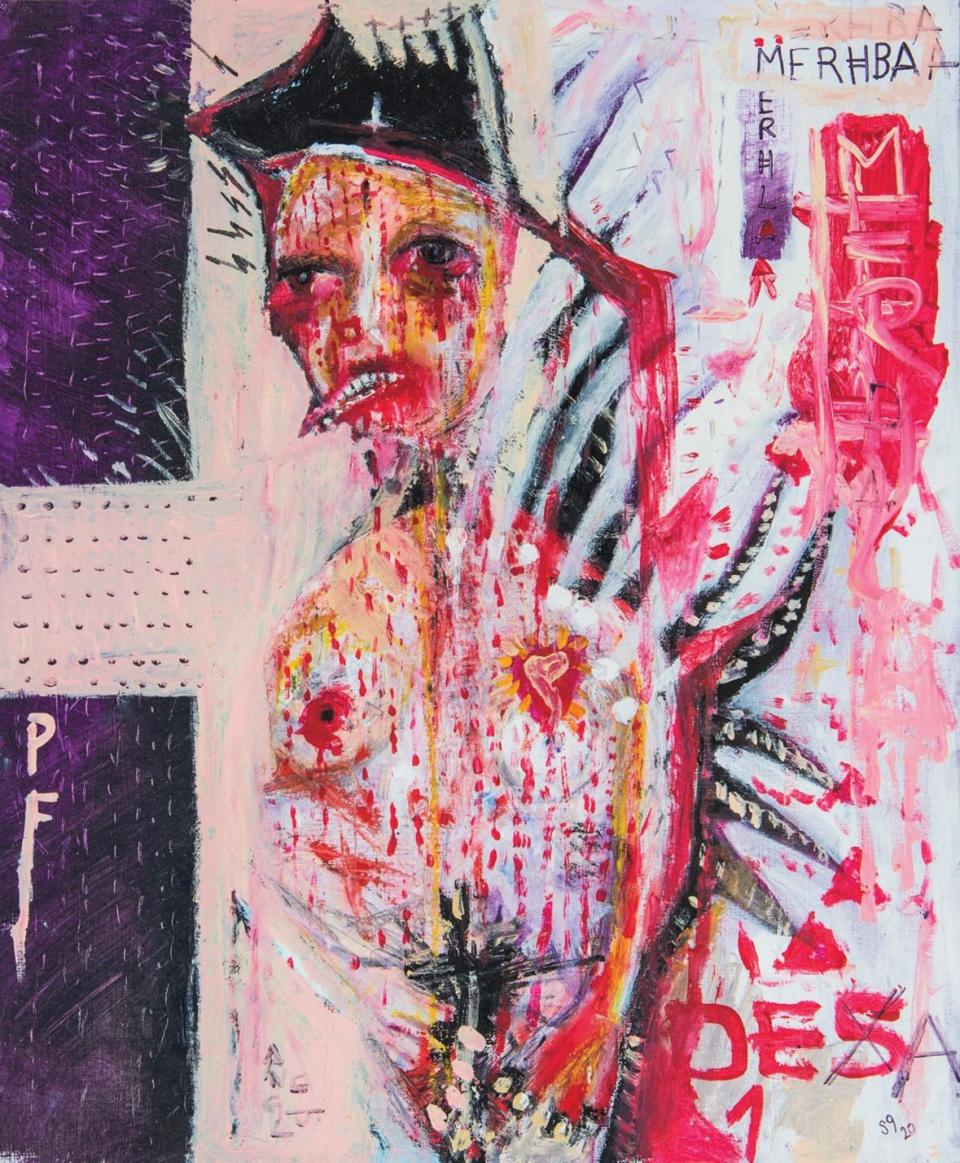 The normalisation of these abject phenomena has become a way of life, and such behaviour seems to be accepted as a ‘rational’ reaction to contemporary circumstances. Grech despairs at the systematic relaying of doctored “ill-information” from dubious sources. “One sees pockets of extraordinary humanity, people reacting”, which for him is an important redeeming factor.

The artist defines the underlying thought process behind this exhibition as “a comedy of errors”. He found himself in what he defined as “a strange liminal space” as he suddenly realised that the world has moved on since his Valletta exhibition, and the internet has become a wonderful tool that he had to exploit. The concept is of the essence, stressing that he’s not interested in shallow aesthetics. 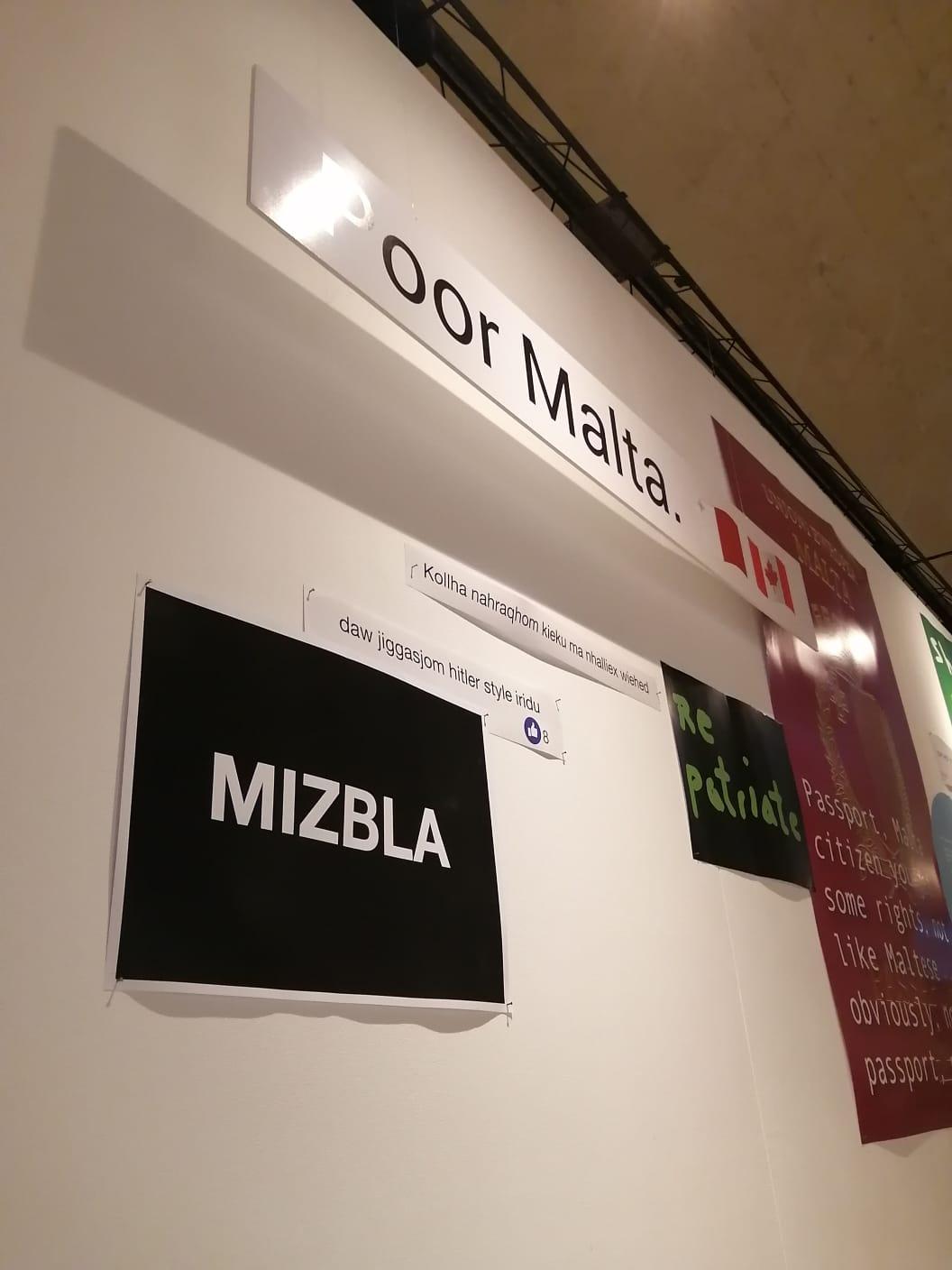 Three words into one

“I am an academic, I’m a sociolo­gist and I paint. Words are my trade.” This exhibition is about bringing all these aspects together through a collaboration with other creatives. His academic work is concerned with colonialism, post-colonialism and neo-colonialism, especially relating to Latin America.

He focuses on the decolonisation of this part of the world, with a particular interest on disability studies in a global context of extreme poverty. By coining the hybridised word ‘dehumaneation’, he encapsulated, under an invented umbrella term, the three words that define his academic work – ‘dehumanisation’, ‘humiliation’ and ‘nation’. 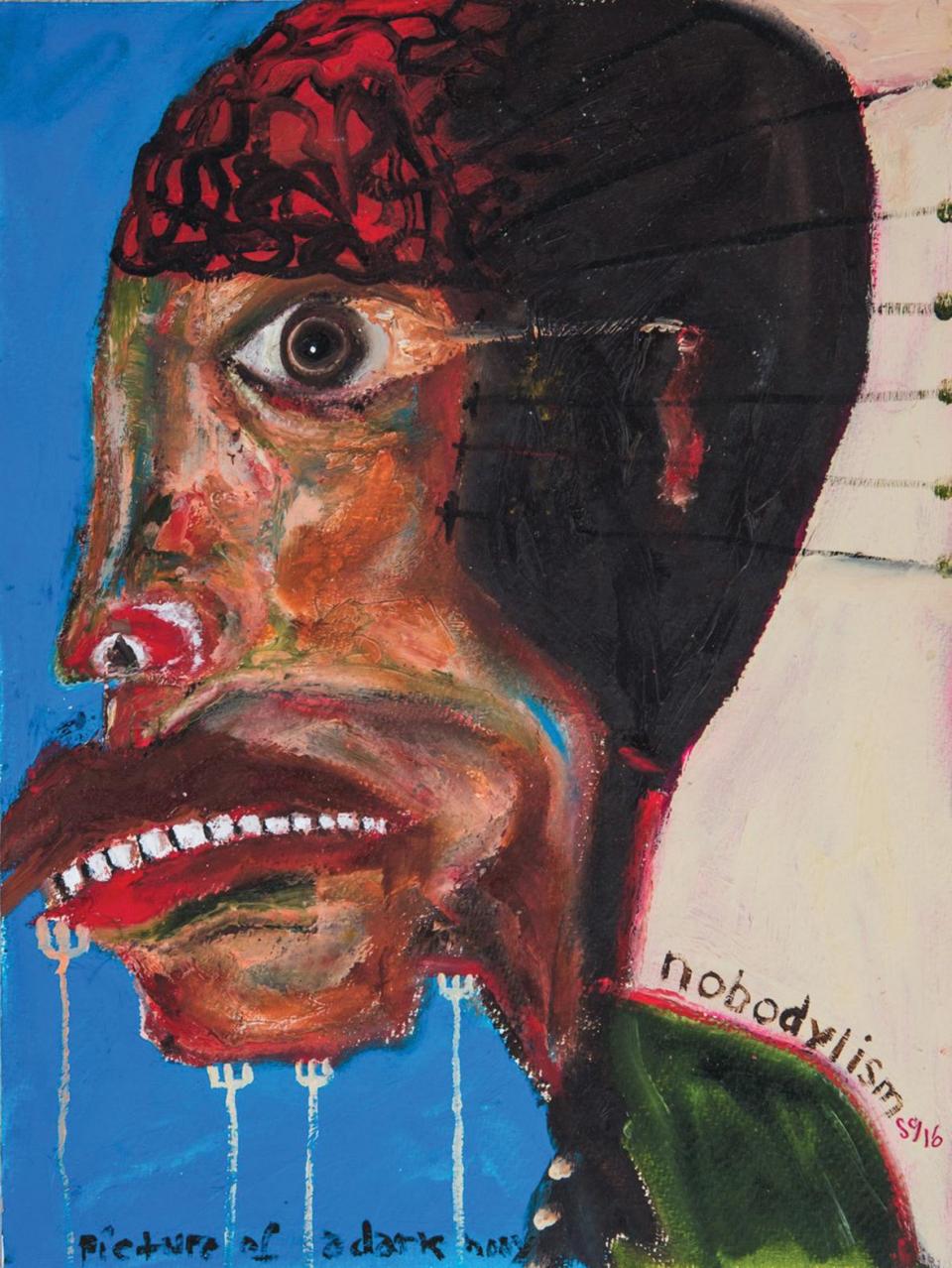 “By nation, I mean it in a context of exclusion, oppression. The flags dangling outside our houses when COVID reared its ugly head – that was not a benign process of togetherness.” He insists that this ‘coming together’ exhibited inherent segregation and ostracisation.

‘Dehumanisation’ happens through humiliation and through establishing who does and who doesn’t ‘belong’ to some socially accepted group. The parroting of fascist slogans on social media leads to psychological and sometimes even physical violence. This stigmatises, degrades and makes outcasts out of fellow human beings just for being so-called ‘different’.

Grech’s research is concerned with disabilities, with broken bodies, with bodies that do not fit, bodies which are humiliated. “In recent years, I’ve been working on issues of disability and forced migration, in other words disabled refugees.

This brings to the fore the notion of citizenship – who belongs where – and rights. Rights are conferred on citizens. Citizens can claim their rights. What happens to those rights when borders are traversed and what happens to one’s humanity?

In a nutshell, Dehumaneation is about all this.” The concept transcends the exhibition itself and Grech would like to continue investigating it as an academic project that would have a much longer time frame. 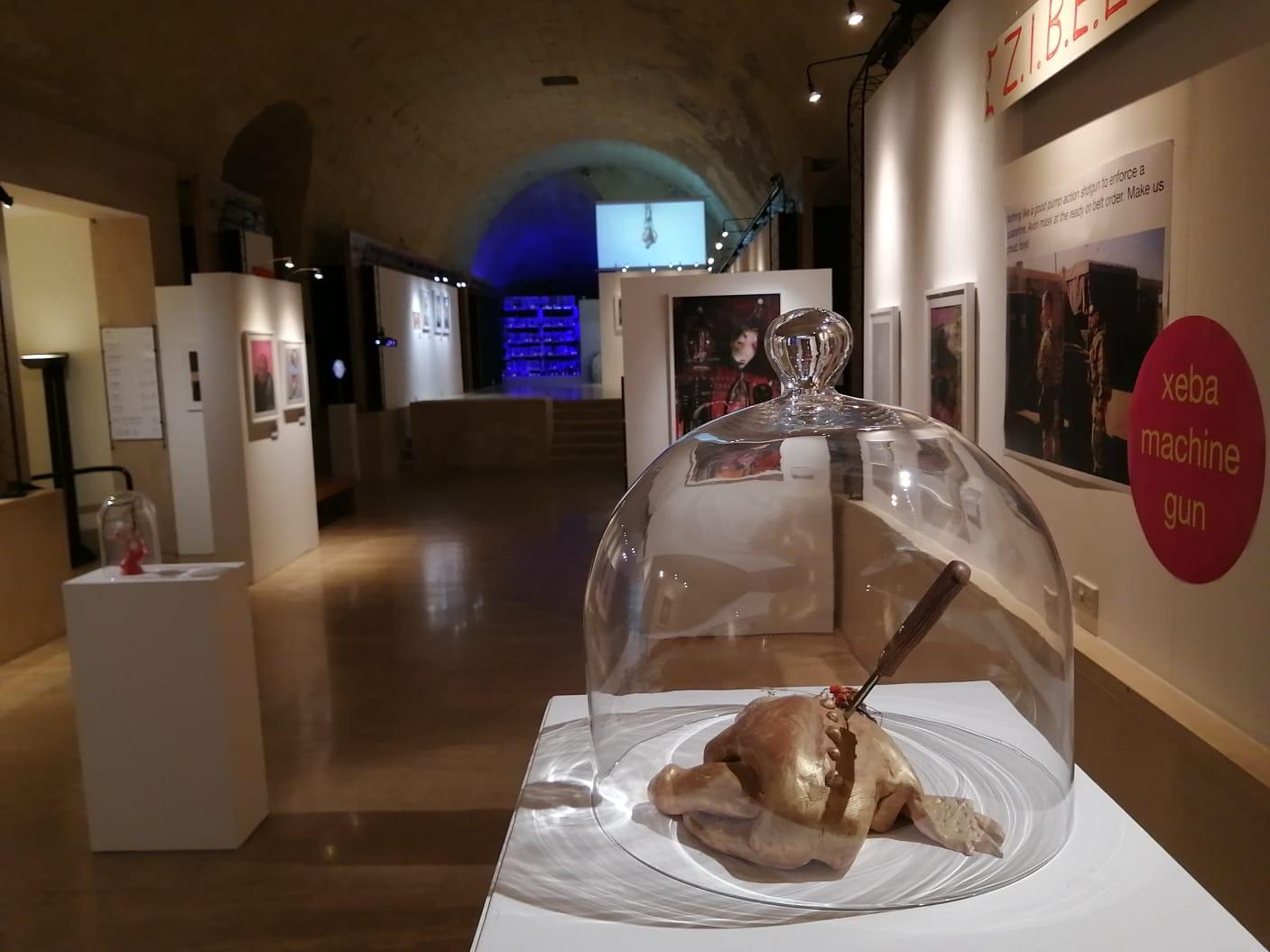 A short clip promoting the exhibition has been uploaded on social media. Two of the characters pulled out of one of the paintings are animated to form a carolling duet chanting a disconcerting take on a cherished Christmas carol, The 12 Days of Christmas.

“We have taken something which is warm and fuzzy, that we know too well, to a wilful ambiguity. It is a tragicomical analysis, through a tune that creates a sense of comfort, of the current context that we face. If we had to pile it up, we would have needed 25 days of Christmas to incorporate other issues.”

For Grech, there is no particular artist who garnishes the spirit of the times in which we are living. “There is no artist, in my opinion, who can nail the signs of particular times. Did David Bowie or Bob Geldof reflect the signs of their times? When we revaluate Live Aid, there are some hugely offensive words in the anthem Do They Know it’s Christmas – ‘because today thank God it’s them instead of you’ – that is so wrong, so politically incorrect.

“Mercifully, we have progressed in a way, as not having the token black person in a movie or having an actor playing the role of a disabled character in a film. The latter is so hugely offensive. There are so many amazing disabled artists out there.”

This exhibition is an expression of the artist’s ideology. “There is an enormous culture of silence and artists seem to maintain the system. It is a shame not to use a medium for political purposes. I’m not interested in the financial dimension of it. The way I approach what I do is that I have nothing to lose, and even if I did, I cannot be dishonest with myself.”