This photo-report was presented by James Grima, former head of facilities management at Gozo hospital, who was appointed director once Steward took over the concession from Vitals Global Healthcare in 2018.

Images in the report referred to various projects undertaken since the inception of the concession in 2016 up to July. Some of the works are still ongoing, the director explained.

In a reaction to the report, Delia uploaded some of the photos on his Facebook wall, saying they were the only evidence put forward by the concessionaire “as though by way of proving how funds were spent.”

That evidence “spoke for itself,” he said.

“Today they put forward evidence showing that they are thieves.”

In a previous court sitting, documents presented by a Planning Authority representative indicated that little progress appeared to have been made since 2017 in infrastructural works at the privatised hospitals, with some development permits having since expired and others close to expiry.

Delia is arguing that Vitals and Steward failed to fulfil contractual obligations of that deal and since important milestones had been missed, the hospitals were to be “given back to the people.”

The case before the First Hall, Civil Court, presided over by Mr Justice Francesco Depasquale, continues in November.

Lawyers Edward and Nicholas DeBono are assisting the applicant. 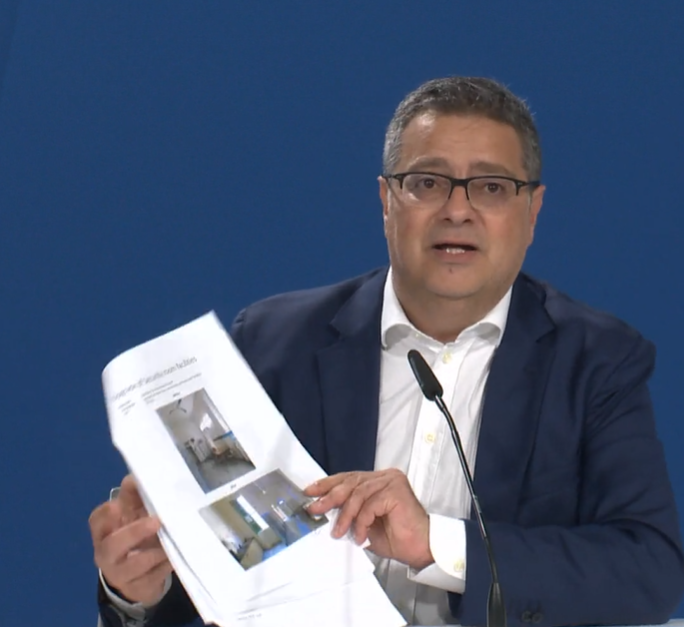 Addressing a press conference on Tuesday, Delia called on Prime Minister Robert Abela to “do the right thing” and tear up the contract with the concessionaire.

“Every day that this contract is allowed to go on, the public is being robbed and the prime minister will have to explain why he has allowed this to happen,” Delia said.

He said he had opened the court case to have the contract rescinded because he believed the Maltese people were being taken advantage of.

The report presented by Steward, he said, showed that the company was even ready to laugh in the public’s face.

Try not to laugh. Don’t laugh, because it is actually worth crying over- Adrian Delia

“This is not only disrespect to the court, but more so towards the Maltese people,” he said.

Describing the photos submitted by Steward as “shocking”, Delia said that they had to be seen to be believed.

“Look, they painted a door – for €60 million.”  “Try not to laugh. Don’t laugh, because it is actually worth crying over,” he said.

The press conference was also addressed by Opposition health spokesman Stephen Spiteri who said that since the deal with Steward had been signed, there had been no new hospitals built and no overhaul of the healthcare sector.

Accusing the government of burying its head in the sand, Spiteri said  Malta does not need a foreign company to show it how to run its hospitals.

“We are more than capable of providing this service,” he said.