Scents of sage, lavender and cornflowers rise from the meadows of Albania, which has seen soaring overseas demand for medicinal herbs since the coronavirus pandemic.

In Sheqeras, at the foot of the Mali i Thate mountain in Albania’s south, it is the season for cornflowers, a plant traditionally valued for its ability to boost the metabolism and resistance to infections.

Early in the morning, before the heat of the day, dozens of women wearing broad-rimmed hats, hand-pick the magnificent signature-blue flowers that attract clouds of butterflies and bees.

The cornflowers are then dried in darkened rooms to preserve their colour before being shipped abroad.

“Cornflowers are the most expensive at the moment; a kilo of dried flowers will go for around €30”

For the past few years, Albania has been one of Europe’s top producers of medicinal herbs, mostly wild plants harvested in the foothills.

About 95 per cent are exported to the US, Australia, New Zealand, France, Germany or Italy.

Demand has been soaring since the coronavirus pandemic increased interest in herbs believed to strengthen the immune system and amid growing enthusiasm for natural and organic products.

“Every cloud has a silver lining,” says Altin Xhaja, whose company, Albrut, has, like many others in the sector, expanded areas under cultivation and intensified harvesting of wildflowers.

That was 15 per cent more compared with the previous year, official figures show.

And the trend continues, with exports 20 per cent higher in the first three months of 2021 from a year earlier. 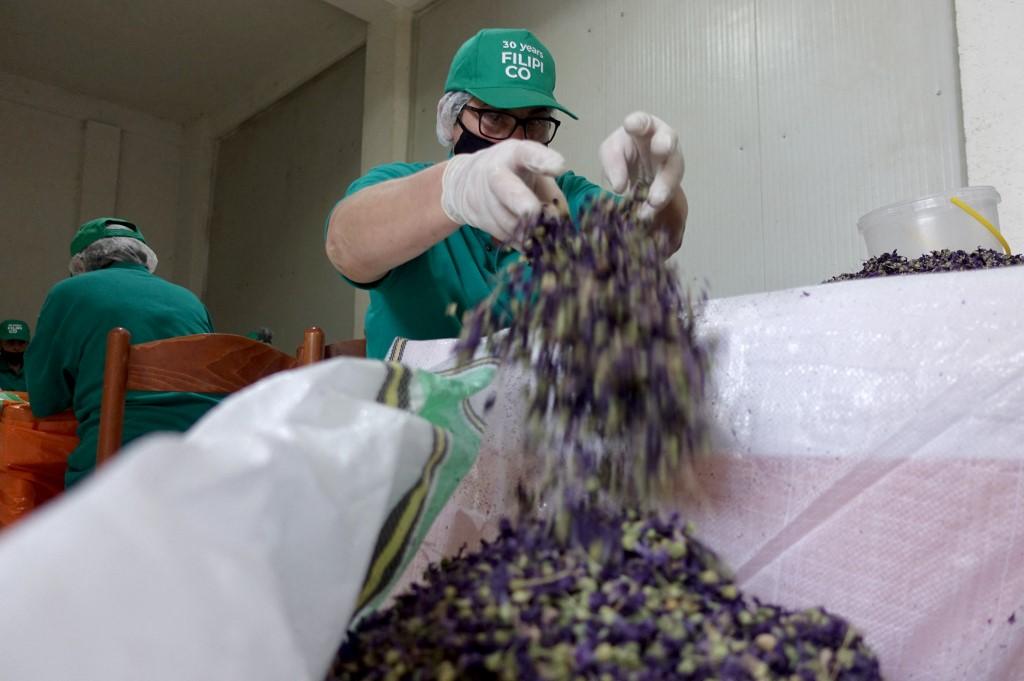 A female worker cleans hollyhock before it is packaged for export in the Filipi Co factory in Lac.

‘We have to be quick’

The boom is a windfall for one of Europe’s poorest countries which, with a population of 2.8 million people, is largely dependent on tourism along the Adriatic coast that has been hard-hit by the pandemic.

Nettle, wild apple trees, cowslip and other medicinal plants provide a living for some 100,000 Albanians, who have long used them themselves in traditional remedies.

“It’s a race against time. We have to be quick,” says Xhaja.

“Cornflowers are the most expensive at the moment; a kilo of dried flowers will go for around €30,” he says. 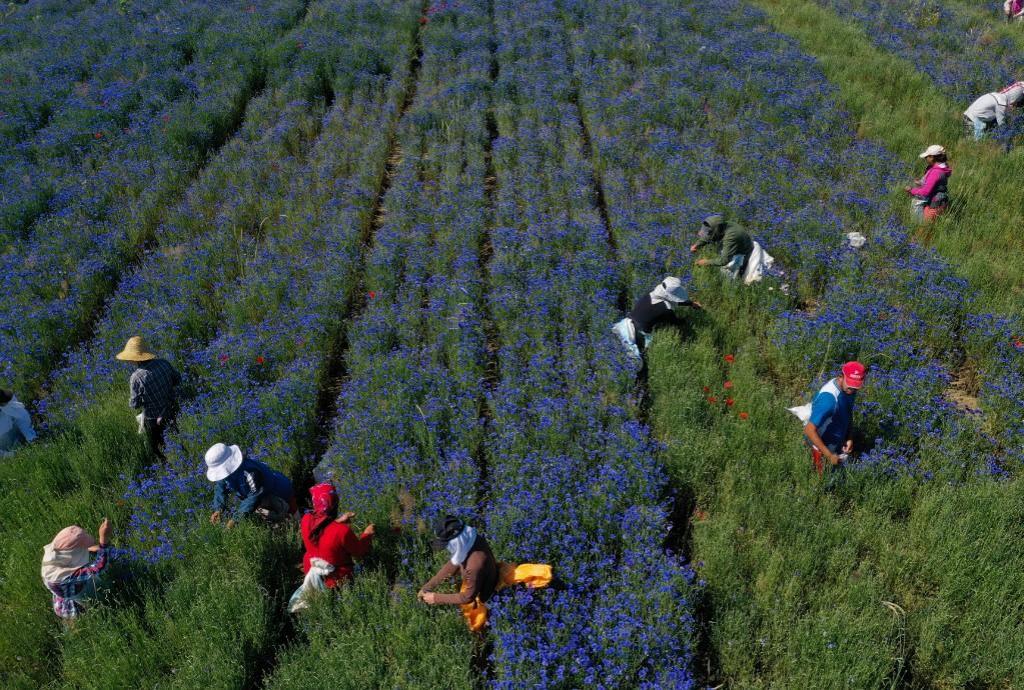 Just next to the fields of cornflowers, a beautiful violet carpet of mallows can wait a bit longer before the harvest.

As dozens of workers busily select and sort plants at his factory in Lac, north of Tirana, Filip Gjoka says that the sector has also benefited from tensions between Washington and Beijing.

“The trade war between the US and China has forced many Western players to turn towards the Albanian market,” says Gjoka, who also heads the association of medicinal and aromatic herbs.

Around 30 Albanian companies are authorised to export the plants used in herbal medicine due to their anti-inflammatory, anti-septic and even anti-stress properties.

They are used to make teas rich in vitamin C and antioxidants, oils or ointments.

‘Sage is my life’

The rocky plateaus in Albania’s north are home to sage, for which demand has increased by 40 per cent, prompting farmers to increase the area under cultivation.

“It was unforeseen. It had to be done quickly to be able to respond” to the demand, says farmer Pjeter Cukaj, wiping the sweat from his forehead.

“These plants provide a living for more than 50 per cent of families in the region,” he adds, crediting local sage, lavender and wild herbs with “magical powers” for the health.

But farmers complain about the difficulty in finding funding for expansion and the construction of storage and drying facilities, and say that any financial aid they do get comes in dribs and drabs.

Professionals are also calling for a law for labels to guarantee quality, which would promote the sector’s growth.

“Everything is pure, without pesticides, without anything,” says Edlira Licaj, as she pulls weeds from around the sage along with a dozen other women.

“We do everything by hand,” she says.

Meanwhile, 91-year-old Drane Cukaj attributes her longevity to the sage infusion she drinks every morning.

“Life is in the meadows, sage is my life, my love, it has always made me happy,” says the mother of nine who also has 40 grandchildren.

Cukaj says she’s convinced that the wild herbs “help against the coronavirus”.

Still, that didn’t stop her from getting the jab – just in case. 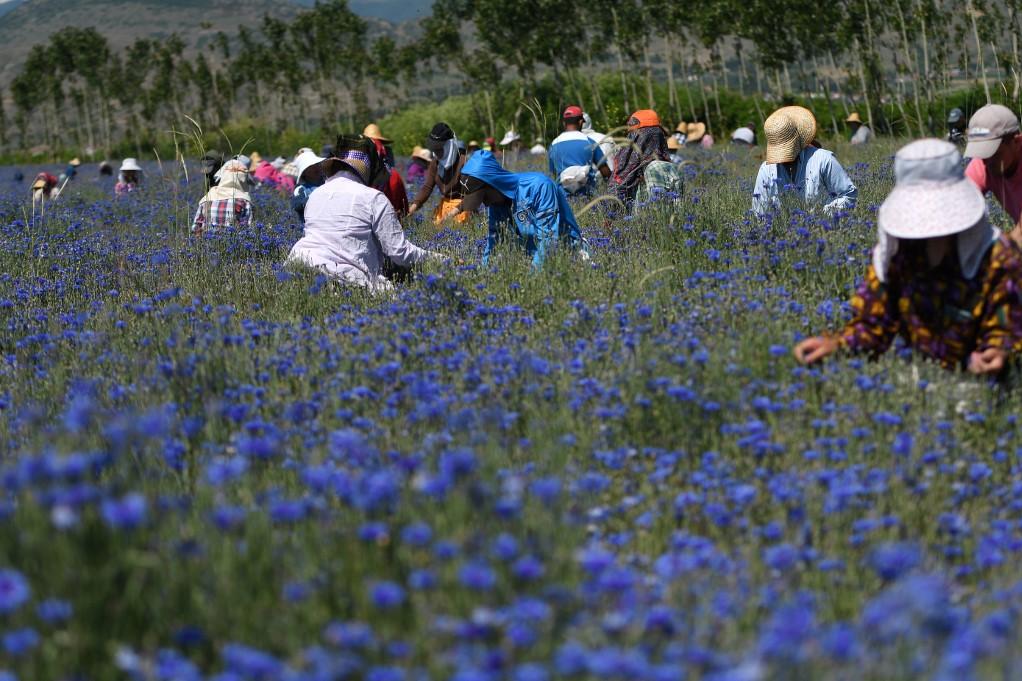 Farm workers pick medicinal herb Centaurea cyanus in the village of Sheqeras near the city of Korca.