Thousands of protestors gathered in Valletta on Sunday to register their disappointment at the situation that has been allowed to fester in the country.

Times of Malta, which supported the protest, broadcast the event live on its Facebook page. 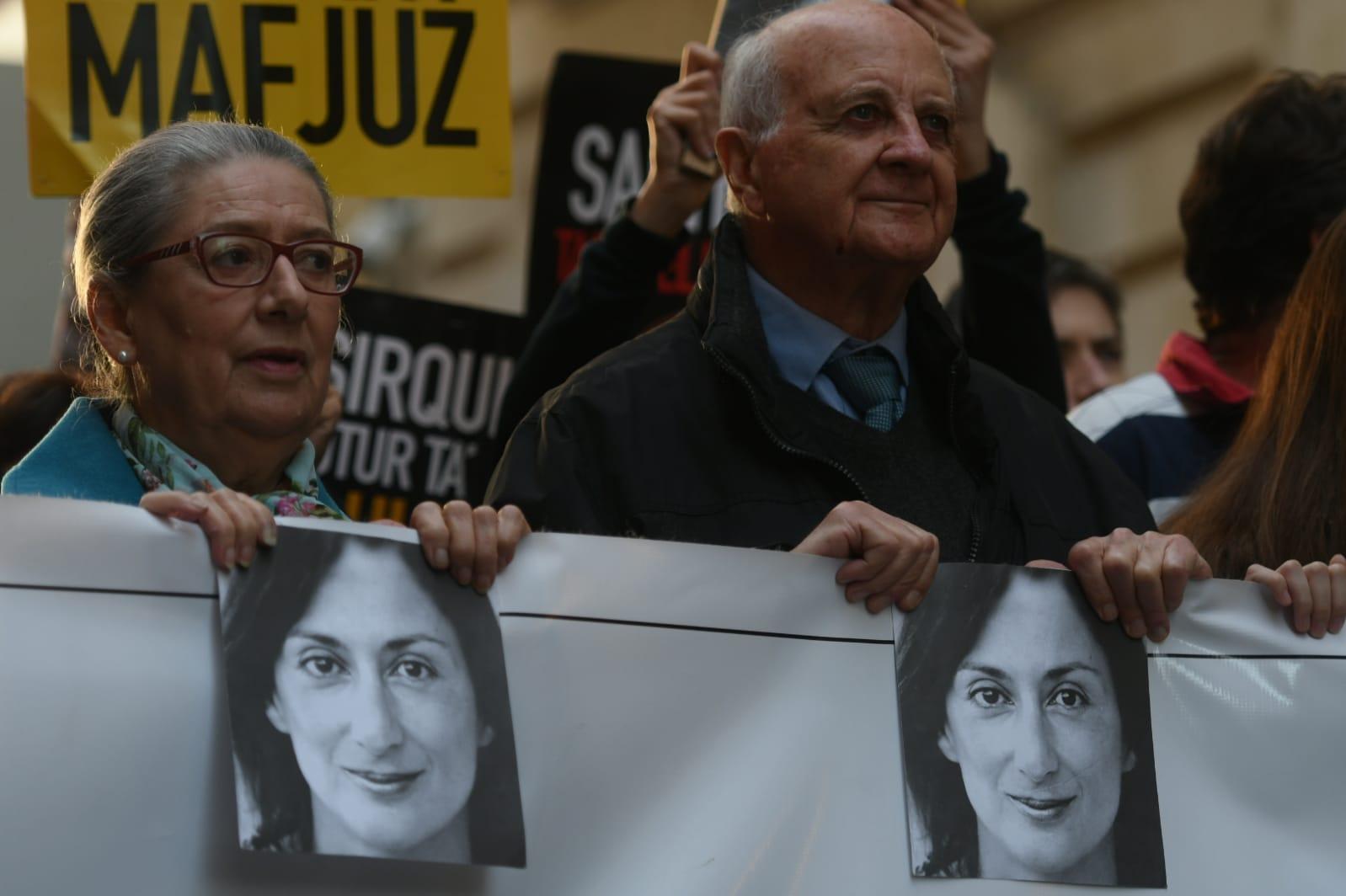 The protesters were led by slain journalist Daphne Caruana Galizia's family and included a good number of young people as well as families with babies and dogs.

Many carried Maltese flags and chanted 'Ġustizzja' (justice), 'Mafia', 'Barra' (out), 'Assassini' (assassins), 'Korrotti' (corrupt) and 'Daphne was right'. They walked down Republic Street turned into St John's Street and up Merchants Street stopping in Castille Square, in front of the Office of the Prime Minister, where Marco Masini's song 'Vaffanculo' was played.

Addressing the crowd, Graffiti's Andre Callus said Joseph Muscat defended businessman Keith Schembri despite the fact that he is sinking in mud.

"The sewage has now exploded in Muscat’s office. Muscat has to shoulder responsibility and resign at once. The longer he stays the more the suspicion to cover the truth. Our country is going to drag out this horrible chapter forever."

Mr Callus said the motto of money at the expense of anything led to this. "We need to attack the root of this. Let’s kick out big business from politics. We need politics that help workers."

He called for the investigation and reversal of the privatisation processes and said it pained him that the PL in government did the opposite of what a socialist party should stand for.

Mr Callus appealed to Socialists to stop living in fear and speak up and face up to "these thieves and murderers". "Let’s use our minds. Blind partisanship led to this." 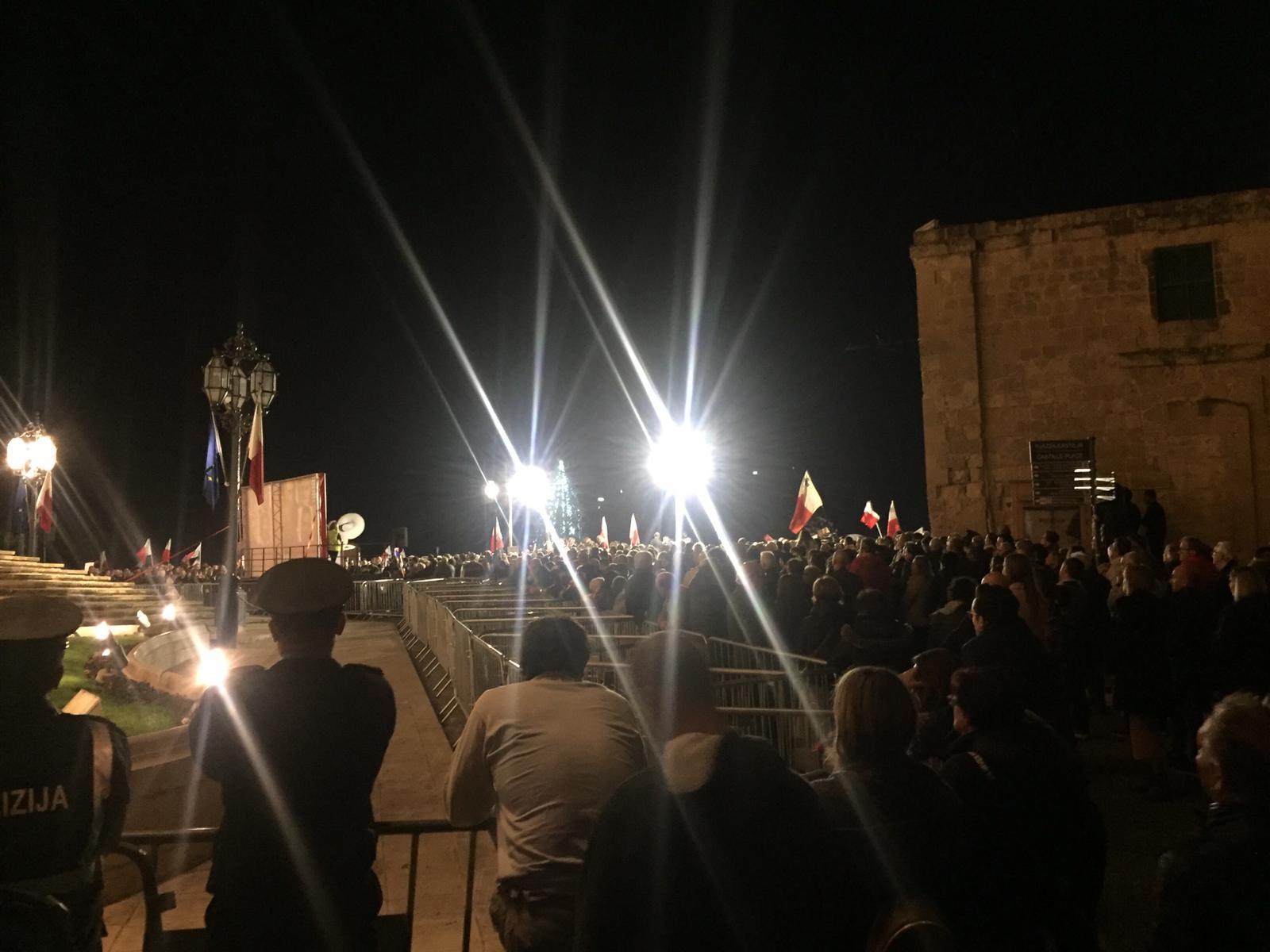 'We are not a catchphrase'

LGBT activist Christian Pace who voted Labour in 2013 said that when he heard Dr Muscat’s departure speech last week he was shocked to hear the Prime Minister promoting the LGBT successes of his government.

"We are not a catchphrase," he said.

"You and your friends carried out one of the most macabre crimes in this country. You gave us civil rights but you took away the right to life..." 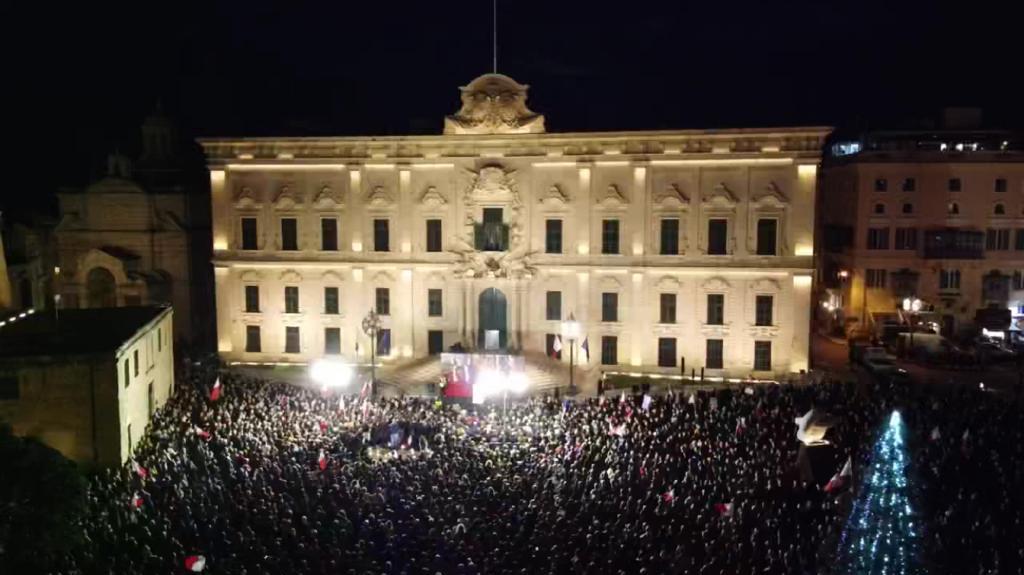 'The PM must think we are idiots'

PN candidate Norman Vella said that the horror stories which emerged in court were linked directly to the Office of the Prime Minister.

Listening to these stories he realised that they wanted Ms Caruana Galizia's laptop to see what she knew about them.

"The prime minister must think we are idiots."

He said he would leave no stone unturned. If he really wanted to get to the bottom of the crime all he needed to do was open the door next to his office and speak to Mr Schembri.

After middleman Melvin Theuma testimony in court it was clear the murder had been paid for with our money, Mr Vella said.

"We will keep marching until we know the full truth... We tell Dr Muscat’s successor that our fight will not stop with Dr Muscat. The new prime minister has to be accountable to the protestors."

Mr Vella said the new Prime Minister had to offer an apology for the crimes committed by his predecessors and every cent stolen from the people had to be returned.

The protesters, he said, expected the new Prime Minister to lay candles and erect a monument for Ms Caruana Galizia in Valletta. 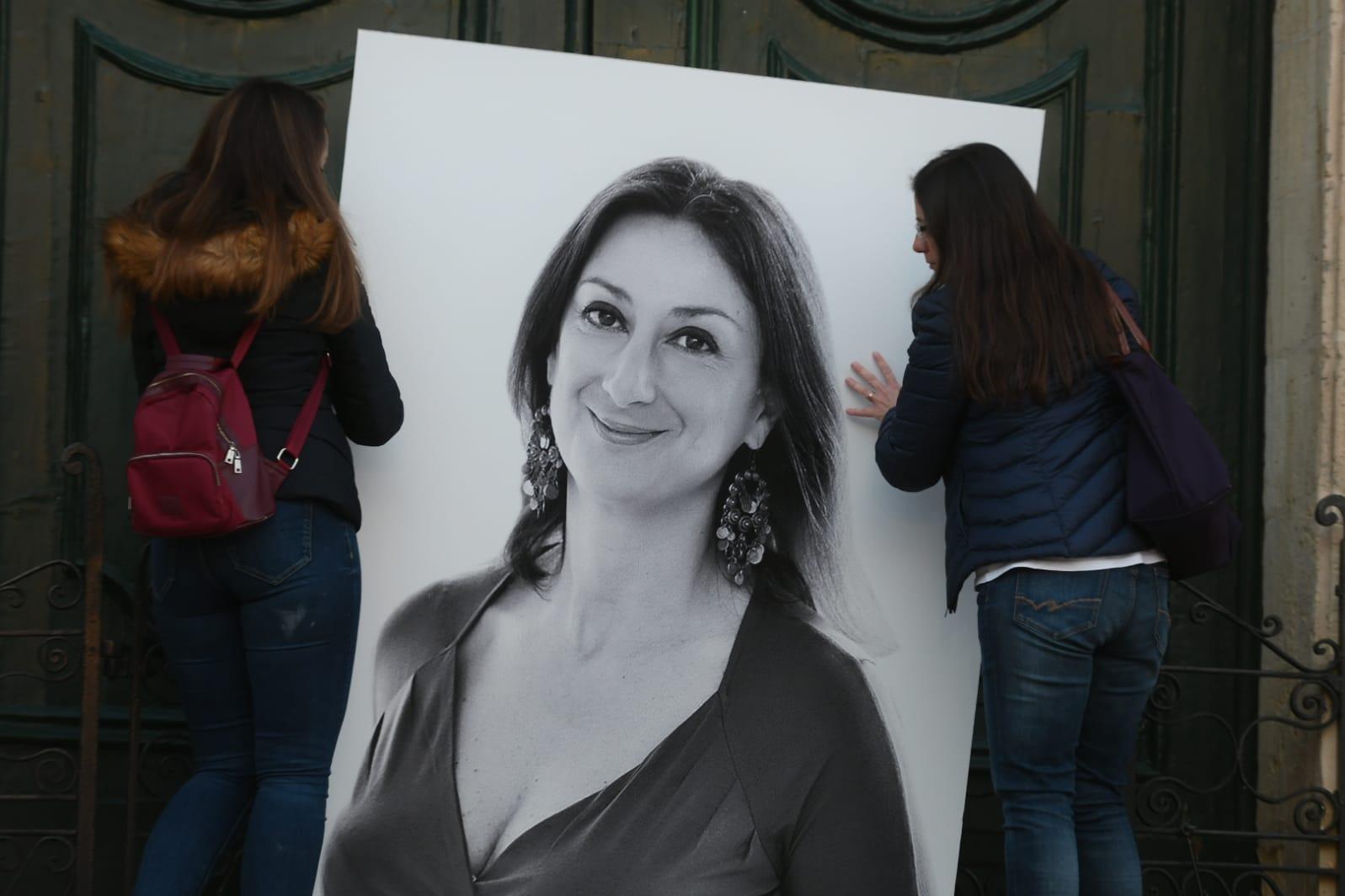 Activist Louiselle Vassallo said the least the government could do was show remorse and then make a genuine apology.

"Does nobody have the backbone to get up in Parliament and speak up," she asked.

'An insult to the country'

Blogger Manuel Delia, one of the organisers, said one of the most obscene scenes was witnessed this morning with PL leadership contestants Chris Fearne and Robert Abela holding each other’s hands as though they won something.

This was an insult to the country. Stop trying to give the impression we are living in normal times, he said.

Mr Delia accused the Prime Minister of being an agent to the Mafia who did not want anything to change after he left. The Mafia wanted to continue building towers and doing as they pleased because the police would not act.

He asked why weren't the leadership contenders making promises such as to dismantle political party stations and ensuring justice for all.

"Why aren’t you apologising to Daphne Caruana Galizia's family? Why are you still smiling with Muscat?"

Civil society, he said, was proud to have the free media united with civil society in the value of honesty.

Before the speeches started, a large photo of Ms Caruana Galizia was placed in front of Castille's door.

The protest had a noticeably thinner police presence than there in recent protests and very few barriers. 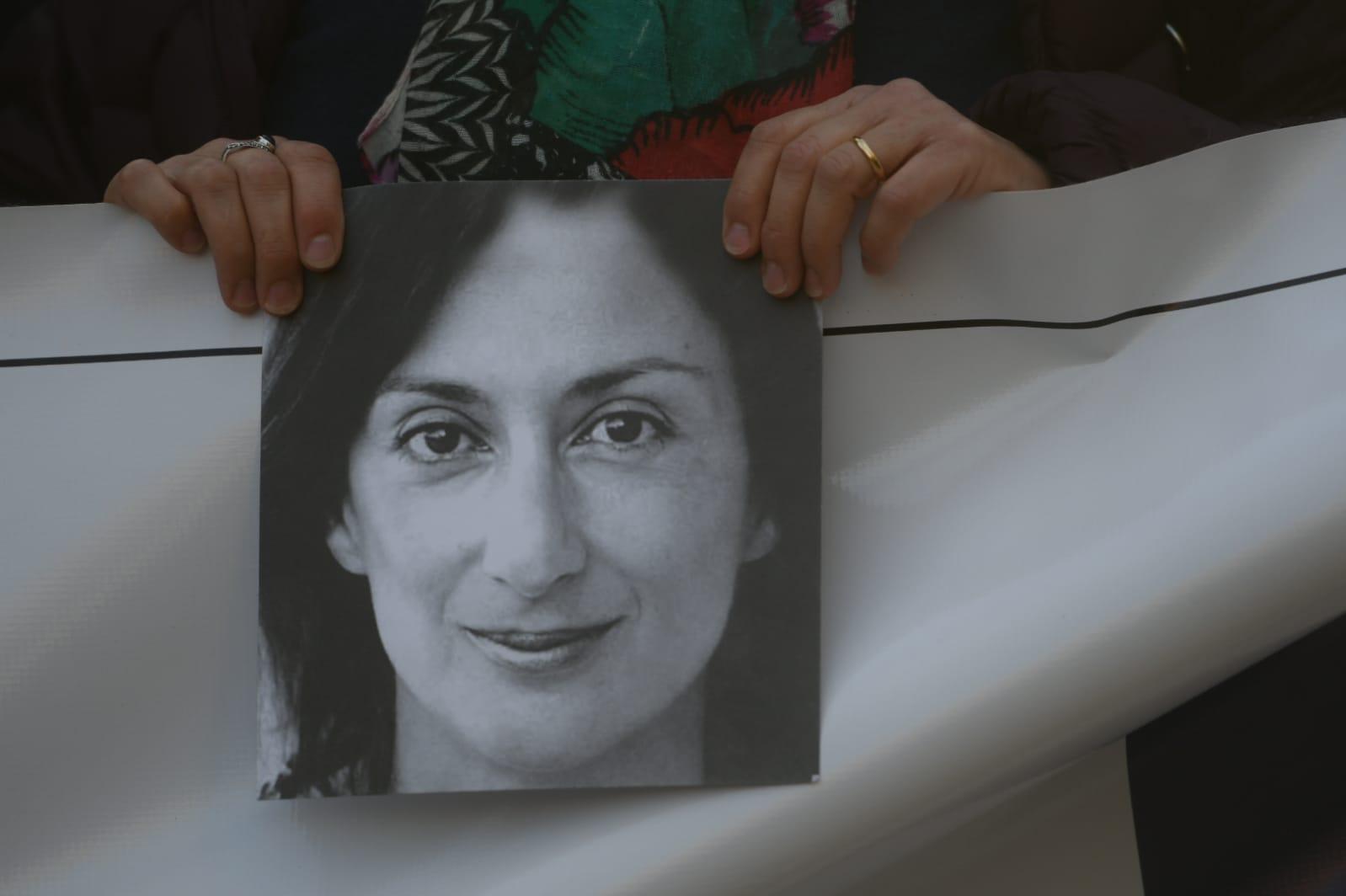 Protestor James, 30, said the country had passed the threshold to what was acceptable behaviour from the government and a collective opinion against what was happening needed to be shown in a non-partisan way.

Sarah, 47, said that because of all that was going it was impossible to stay home. "I want to stand up to be counted. I hope for change. I’m Maltese and I don’t like my country’s name being dragged through the dirt all over the world because of what’s happened."

A 44-year-old woman from Balzan, with her husband and two children in tow, all holding flags and placards, said she was in Valletta because she expected justice to be served.

Antoine Gouder, from Birkirkara, said it was unacceptable that the following all the developments in recent days, the Prime Minister refused to leave because of party politics.

The protest was the third this week organised by civil society groups Repubblika, Occupy Justice and manueldelia.com after a crowd gathered in protest outside the Police Headquarters on Tuesday and outside Parliament the day before. 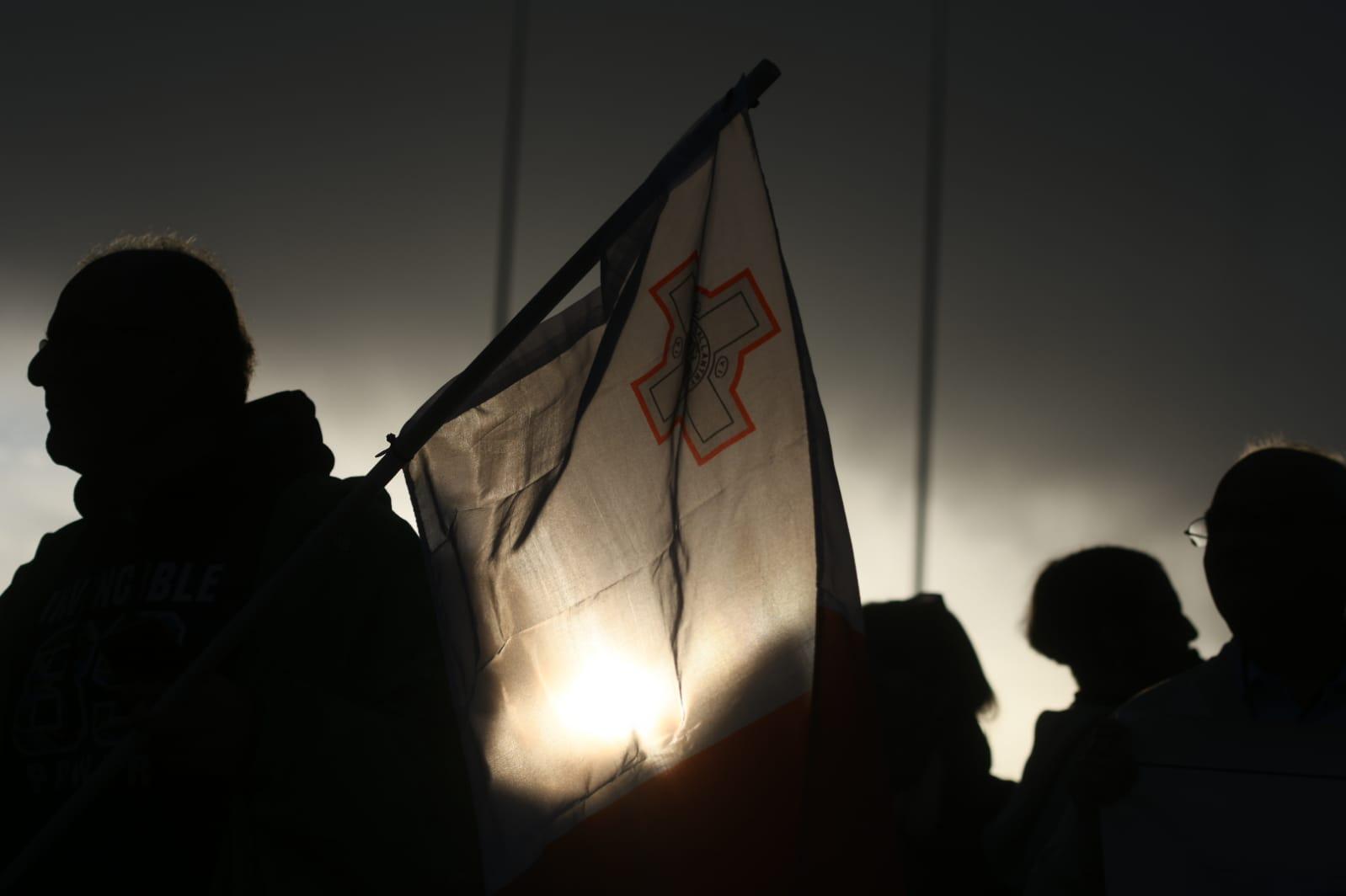 Protestors called for the imminent resignation of Prime Minister Joseph Muscat and for justice to be served to all involved, especially public officers, in the plot to assassinate journalist Daphne Caruana Galizia.

Updates from the criminal investigation and public inquiry into the murder continued to rock the already unstable political situation as it was revealed that alleged middleman Melvin Theuma met with former OPM chief of staff Keith Schembri and was given a phantom job on the public payroll.

Public outcry has grown louder and wider as more groups have been joining protests in a unified front, with Sunday's protests being supported by NGOs Moviment Graffiti and Aditus, the University Students' Council and a number of media houses. 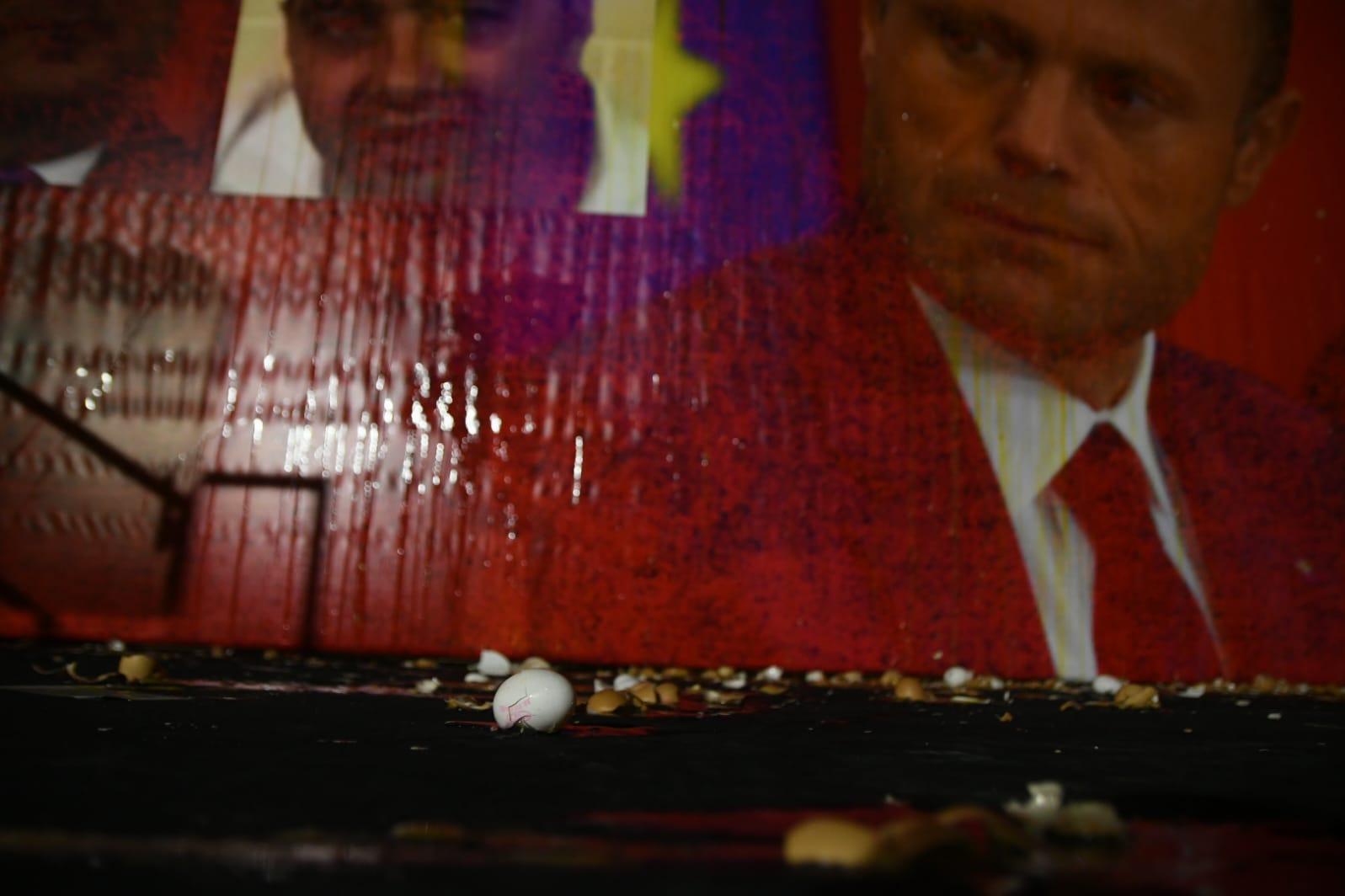 The protest ended with the national anthem. When it was all over, some of the protesters egged a large poster depicting Dr Muscat that had been set up in front of Castille.

The live Facebook video was shot by Gordon Watson 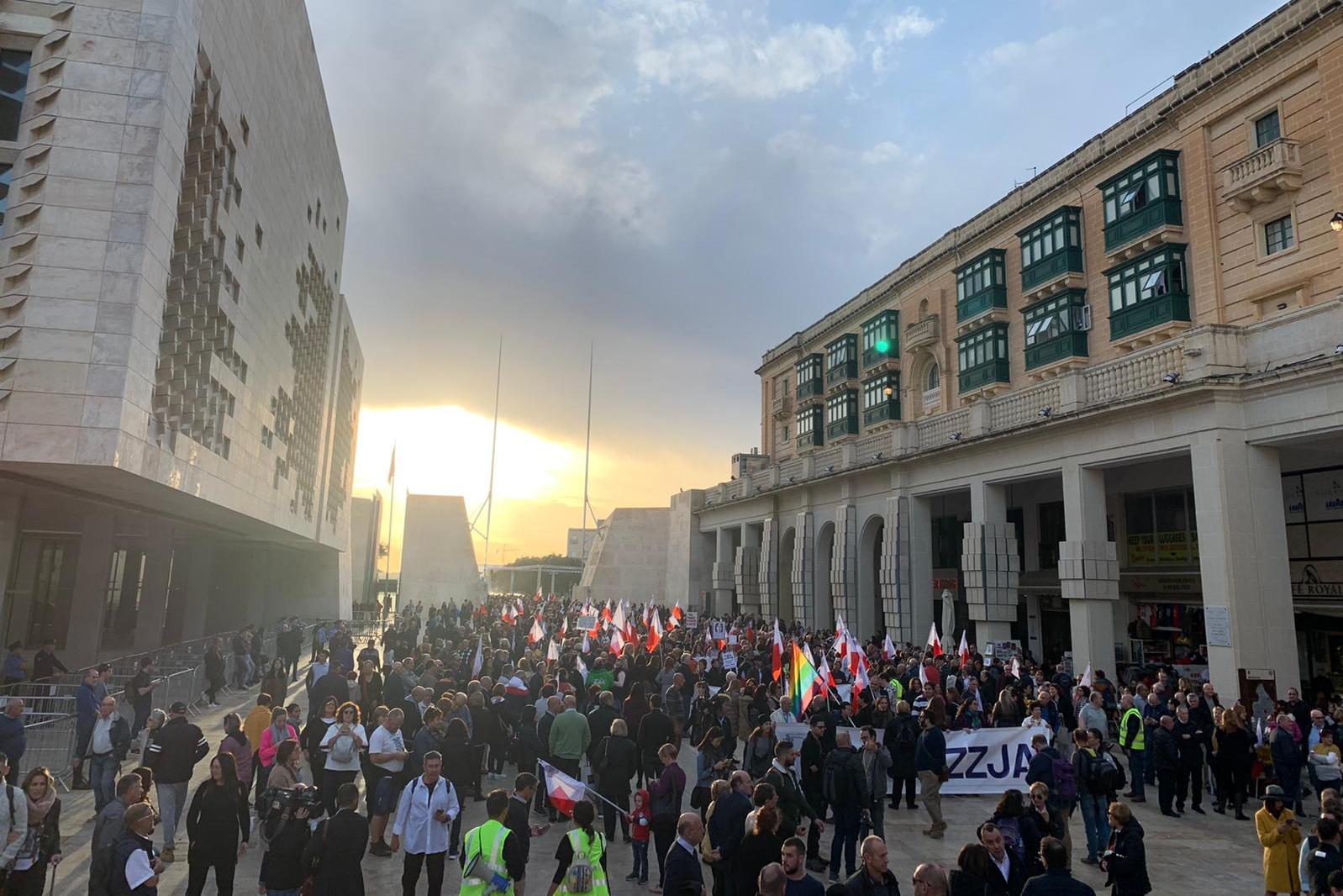 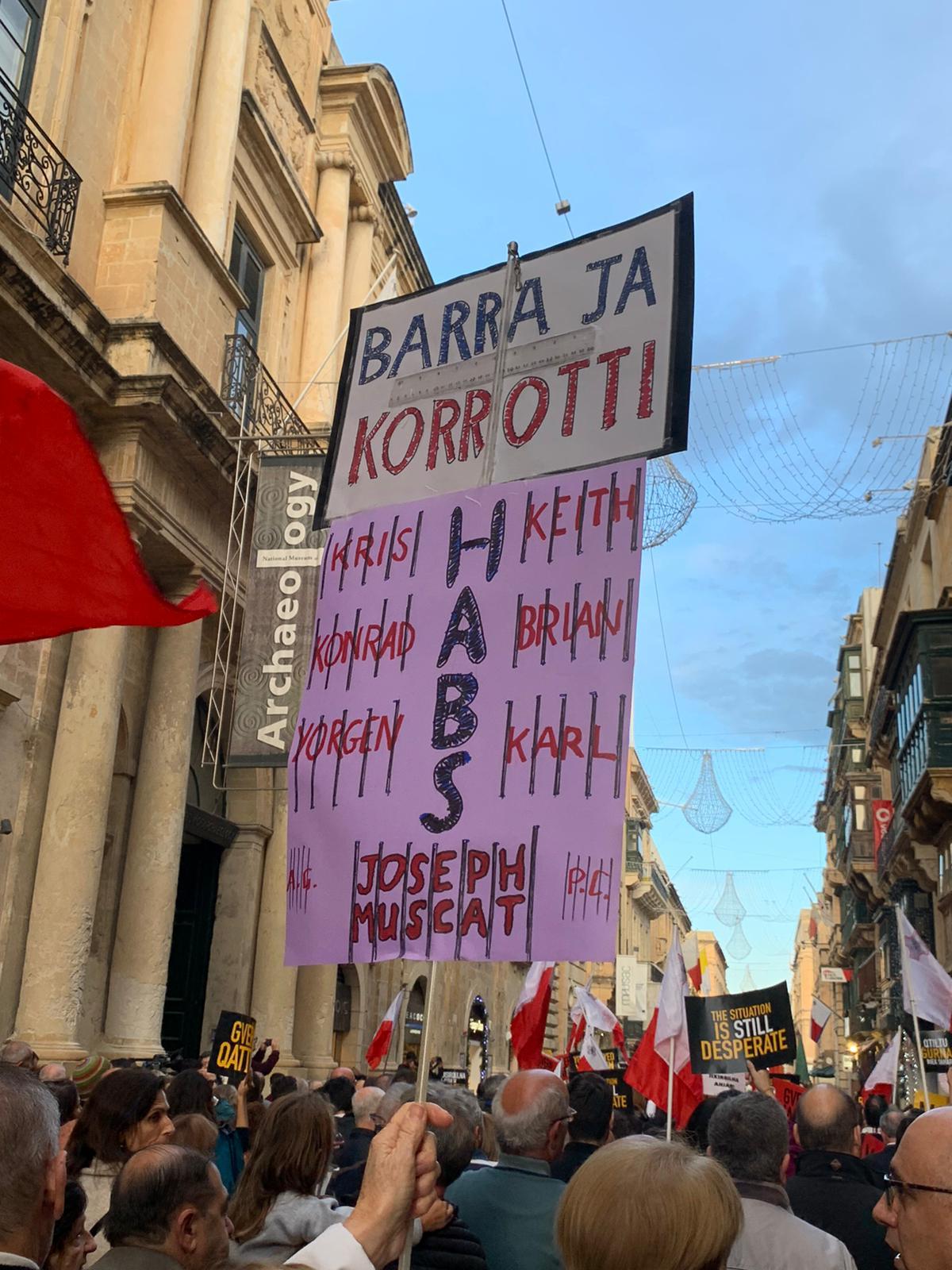 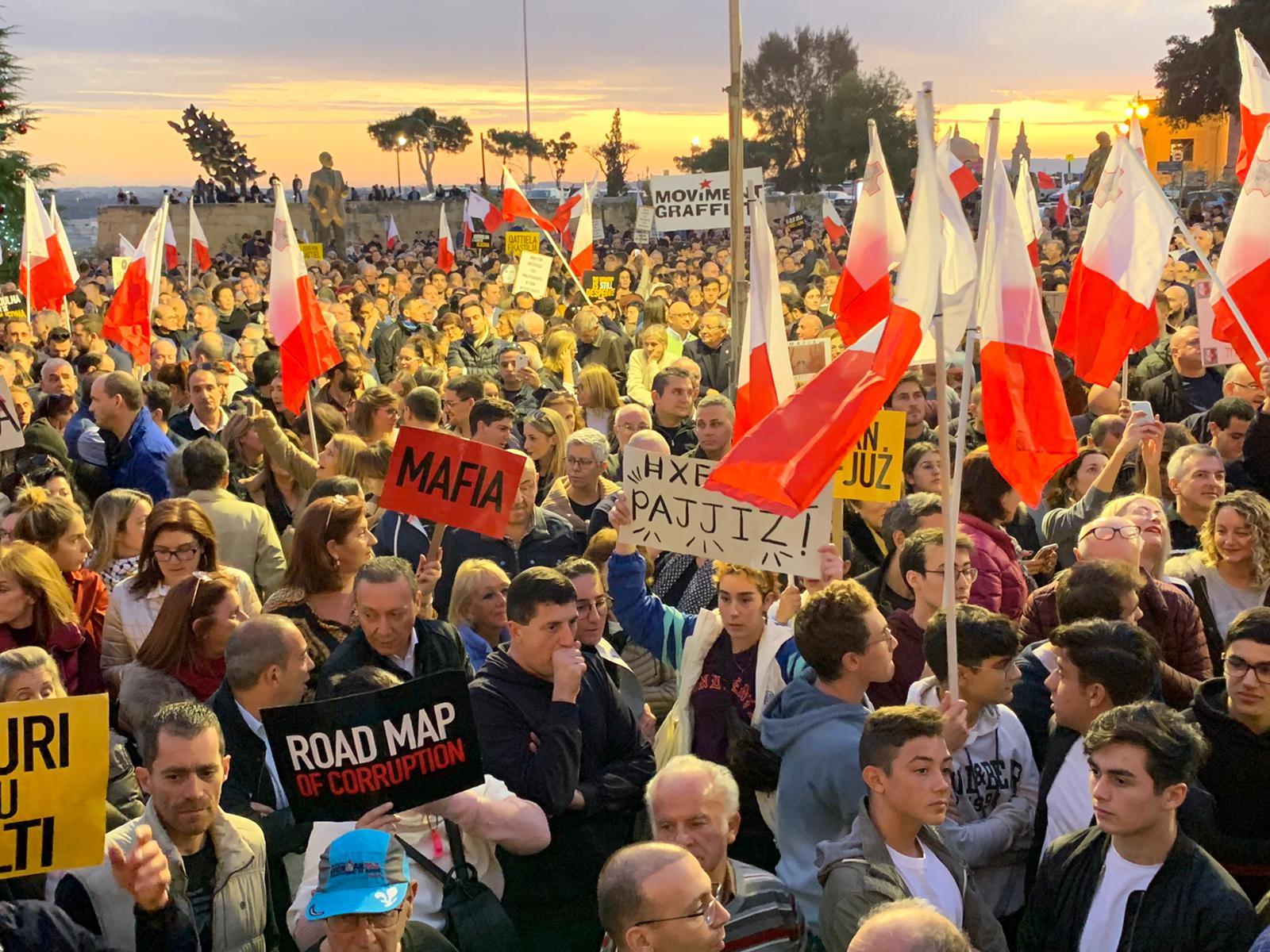