Saudade is going to be your fourth personal exhibition. It there an underlying concept that binds your four exhibitions together?

There is a common existential concept regarding humanity which might link the four exhibitions.  The first two exhibitions were more instinctive and ex­pressive in execution.

One can say that they had a more basic animal nature in which the white virginal canvas was ravaged with colour.

There was a certain elegance in execution in the third exhibition, after which I had a break that was necessary for me to change my attitude.

I am now more attracted to a calm disposition, to certain mythologies that contain a narrative within them. I gathered all these influences together with other ones originating from the literature and theatrical fields to create something more serene.  Notwithstanding that there is a continuation and a connection with my other exhibitions, however, Saudade is a step forward and a stand-alone.

Most of your paintings are about the human body. Does this particular genre define you or do you envisage artistic journeys via other genres in the future?

Honestly, I don’t know what the future holds. I get so much inspiration from our human existence. My figurative art is my reaction to the world in which we live. 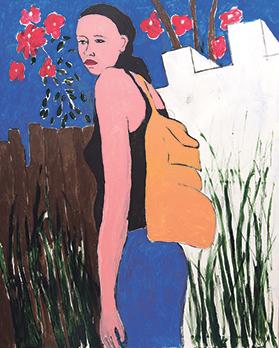 We are living in a very clinical time where emotional strength is sorely lacking. I can be moved emotionally, and thereby in­spired by themes that I can express via a figurative genre.

Each exhibition is a meta­phorical scraping at the proverbial bottom, which compels me to discover more and more.  That is the beauty of art and its universality.

The human figure, clothed or otherwise, is my starting point. The paintings are a mirror of myself.

The relevance of art goes beyond the temporal time in which it was created; a Lucio Battisti song is still relevant these days and will always be.

Similarly, figurative artists like Eric Fischl, Marlene Dumas and Andrew Salgado are still relevant in this day and age. I believe that, as is the case of Salgado, I’m favouring a direction which boasts a strong decorative element. And I’m liking it.

One is drawn towards the eyes in the Saudade collection of paintings. They display a Francesco Clemente power to attract attention. The Italian transavanguardia artist re­searched Indian iconography for a sense of transcendentalism. Is this your intention too?

The eyes endow a random individual with a definite identity. I have denuded everyone in this exhibition, be it mother, son, daughter, corpulent or slim. This collection of works displays an egoistic and deterministic component.

When I tackle a canvas, the first strata, consciously or not, originate from a very dark place.  I intentionally negate the identity and reduce the human forms to just beings or clones. The pupil establishes an identity in some cases. The eyes in the works of Clemente and other artists have always bewitched me.

Take Modigliani, for instance.  The eyes are chasms in which all sense of individuality and identity is lost.

One particular painting in this collection evokes Matisse’s masterpiece The Dance. In some other works in this collection, the palette, the stylised figures, the lush flora, the elan somehow point at him. Has he replaced Marlene Dumas, David Hockney, Chantal Joffe and Eric Fischl as sources of inspiration?

A lot of artists are a source of inspiration when I’m creating.  However, I intentionally desired a Matisse aura which I always have admired.

The Dance was interpreted by Hockney as well. One can say that this particular painting is my interpretation of the Matissean masterpiece.

As regards other influences, I can mention the Greek Vases, the flatness of the Gothic, the books of alchemy, the early 20th century modernism of Matisse and the contemporary oeuvre of Alex Katz. However, I can’t pinpoint a major or a predominant influence.

Your third exhibition, Dik il-Qtajra, was an artistic collaboration with your father, who is the author of a rather controversial book which was banned in the 1980s. The title refers to a drop of seminal fluid. Is the Maltese audience ready to stomach such unorthodox themes tackled by a Maltese artist?

There is the misconception in Malta that we are really going places, intellectually. We simply are not. Contemporary Maltese art has its fair share of gimmicks, and certain statements border on the ridiculous.

There is the misconception in Malta that we are really going places, intellectually. We simply are not

The mentality of the island seesaws from one extreme to another and this is not endemic to the artistic field only.

I don’t give two hoots if I’m niched as modern or contemporary. I get informed and I’m aware of what’s happening around me.

My father’s book Dik il-Qtajra was banned in the 1980s – yesterday’s news, which wouldn’t create a ripple in a contemporary context. An artist should be honest in his work despite everything, otherwise there’s the danger that his work would be contrived.

Malta suffers a lot from this in many spheres. Phoniness contributes to the backward mentality in politics and in art.

My work is a cynical comment on contemporary society and its lack of values, its penchant for the fast lane. It’s a pathetic socie­ty, in which even something as basic as sex has become artificial.

It was never my intention to emphasise that I’m an overtly sexual person. However, a beautiful face is always a source of inspiration. The human body, too, when I subconsciously denude humanity in my attempt to push the boundaries of the notion of what essentially makes one human.

I’m pursuing psychology at university which, together with my predilection for existentialist literature, might be guiding me along as an artist. I’m a believer in Schopenhauer’s deterministic philosophy where he proclaims that, subconsciously or unconsciously, sex does drive humanity.

Growing up, I’ve developed into a man with a holistic outlook that includes a spiritual dimension which I try to infuse into my work. I would like my work to be a prayer. I would like my paintings to serve the function of altarpieces and engage the viewer spiritually, as he or she enters the exhibition hall.

These paintings are about the sadness I experience almost every day when I witness young girls at university being exploit­ed by older men.

It is my sadness in the knowledge of the plight of young children that are subjected to the misbehaviour of their mother through infidelity, or through lack of personal balance. Hence the sexual themes. I regard Schiele as the master of graphic sexuality in art. His oeuvre is the result of his agony for the loss at a very young age of his father through syphilis, a virulent sexually transmitted disease.

The Austrian artist’s perspective on sex is a negative one. Yet, he is sometimes erroneously labelled as a deviant by some people. Just like Schiele, I don’t create these works with an ulterior motive.

Such themes shouldn’t be tackled with an intention to shock.

There’s nothing new to shock with under the sun, and any artist who tries to do this would only be making a fool of himself or herself.

Saudade is defined as “a deep emotional state of nostalgic longing for an absent something or someone that one loves”. Why Saudade?

The birth of one’s child etches an indelible memory.  Rekindling that memory provokes a feeling which one can define as ‘saudade’.

This collection of works is an elegy to the progressive loss of childhood. When one reaches adulthood, one gets entrapped within the stifling norms of society and one craves for, one experiences saudade for the feeling the memory of those moments elicits.

Nostalgia is such a powerful emotion. These personal works are rooted deeply but I feel that everyone can relate to them as they are universal. It is my duty to make sure that everyone does.

Saudade runs between November 8 and 29 at Palazzo de la Salle, Valletta. The artist would like to thank curator Sarah Farrugia for her insight and mentoring during the preparation of the exhibition.