The troops stationed in Malta had to endure a lot. Lack of food, harsh military discipline and enemy bombing all made their life difficult. The majority stuck it out, but there were those who decided to abandon their units and desert. Others were absent from their battalions without permission. 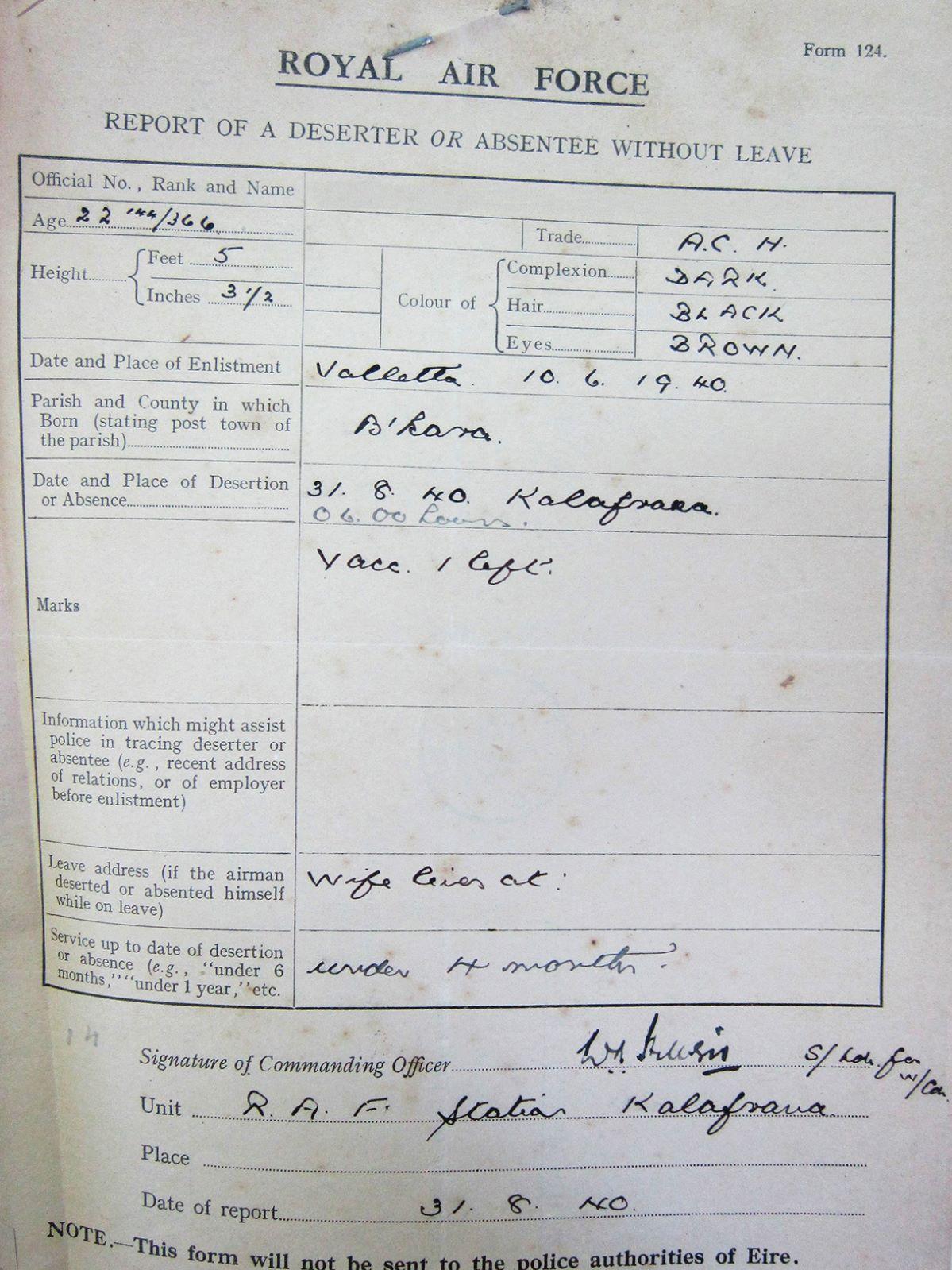 The police helped the military authorities to trace deserters and absentees. After handing over captured servicemen, the police were given a receipt. More importantly, those who made the arrest benefited from a day off, and in the latter part of the war, even monetary compensation. If the missing soldier was Maltese, the first place the police usually searched was his residence. Then they raided his parents’ house and those of his relatives.

Some absconded a few days after Italy declared war. At the end of July 1940, the Ħamrun police searched the house of M. Vella, a 1st Battalion King’s Own Malta Regiment (K.O.M.R.) private, who had left his unit on June 26. Inside his residence, they found his military equipment: a rifle, a bayonet, a bandolier with 50 rounds of ammunition, a steel helmet and a gas mask. Of Vella, there was no trace and his parents claimed they had no idea where he was.

The police were given descriptions of deserters. A private of the 2nd Battalion Royal West Kent Regiment, who managed to flee after breaking the door of a detention cell, was described as: “height 5 feet 10½ inches. Complexion sallow. Well built. Wearing khaki shirt and trousers and side cap. Handling a military cycle and coat.”

Gunner C. Muscat of the 4th Searchlight Battery Royal Malta Artillery was accused by the police of hiding a fellow gunner inside his residence at St Paul’s Bay. This man was not only a deserter but also a dealer in stolen military bicycles. Muscat swore there was no one in his house except for members of his family and allowed the police to search his residence. The deserter was found hidden on the neighbouring terrace and was arrested. Muscat was later acquitted by his commanding officer of harbouring the fugitive.

The police discovered that they had arrived too early when they knocked on the door of a house in Ħamrun and informed the surprised occupant that they were looking for his son, who had escaped from the Detention Barracks at R.A.F. Birżebbuġa earlier that morning. The aircraftman arrived home later that day and was persuaded by his father to accompany him to the police station and hand himself in.

A deserter from the Royal Irish Fusiliers, who was caught by the Gżira Police, had in his possession “a map of Malta, two typewritten papers in Italian language and a letter written in Italian, also an envelope addressed to a Miss Frendo”. The soldier was handed over to the Military Police while his documents were given to the Provost Marshal.

Some found that being on the run was not easy and gave themselves up. A private of the 2nd Battalion Royal West Kent Regiment was only absent from his barracks for two days when he walked into the Gżira Police Station and handed himself in. A private of the 1st Battalion K.O.M.R. reported himself to the Ħamrun Police and told them that he had left his unit 12 days before. He was kept in custody until picked up by a corporal and taken away.

One cannot but feel sorry for a gunner of the 4th Searchlight Regiment R.M.A. On September 16, 1942, the soldier was sentenced to be confined to barracks for 30 days but he disregarded the order and proceeded to Qrendi to visit his mother who had just left hospital. He was arrested a day later and escorted back to his base.

Not all servicemen surrendered so easily. Some resorted to wearing civilian clothes or to wearing uniforms of a different rank or even from a different service in order for them not to be recognised. Others attacked the police or their escort.

A private of the 2nd Battalion Royal West Kent Regiment was spotted in plain clothes in Ħamrun. He admitted to have obtained his attire from a civilian. A gunner of the 59th Anti-Aircraft Battery, Royal Artillery, stationed at Tal-Ħandaq, was captured in Strada Conservatorio, Floriana. He was wearing a sailor’s uniform at the time of his arrest.

Some of the troops who deserted, especially British soldiers who had no relatives to recur to, lived rough, stealing what food they could from farmhouses and fields until they were eventually captured.

PC 261 J. Zammit was passing through a field in Safi when he found a rifle with a bayonet, 100 rounds of ammunition and a pack containing a towel and a ground sheet hidden beneath a carob tree. Investigations showed that these belonged to a deserter from the 1st Battalion Hampshire Regiment.

PC 261 J. Zammit found a rifle of a deserter from the 1st Battalion Hampshire Regiment hidden beneath a carob tree in Safi. Photo: Wikipedia

Great work by the Rabat Police lead to the capture of a British ‘officer’. Inspector Bencini spotted this ‘officer’ entering a partly demolished farmhouse at Għajn Qajjet. Suspecting foul play, he waited for him to come out but the man did not reappear. Later, Bencini returned to find the farmhouse empty. He entered the damaged building and noted that one of the rooms contained a bed with a straw mattress. The inspector realised that someone had recently made use of the bed.

Eventually, the ‘officer’ was traced and taken to the Rabat Police Station to be interviewed. He said that he belonged to the 12th Regiment, Royal Artillery, but the police soon found out that no such unit existed. During the interrogation, the sirens started wailing and a few minutes later, Ta’ Qali was subjected a dive-bombing attack. The serviceman took advantage of the situation and ran away, with the police on his heels. On reaching Għexierem Valley, the fugitive found himself cornered when the constable stationed at Mtarfa heard the police whistles and rushed to help his Rabat colleagues. The man was arrested and investigations revealed that he was actually a corporal of the 1st Battalion Dorsetshire Regiment in hiding. 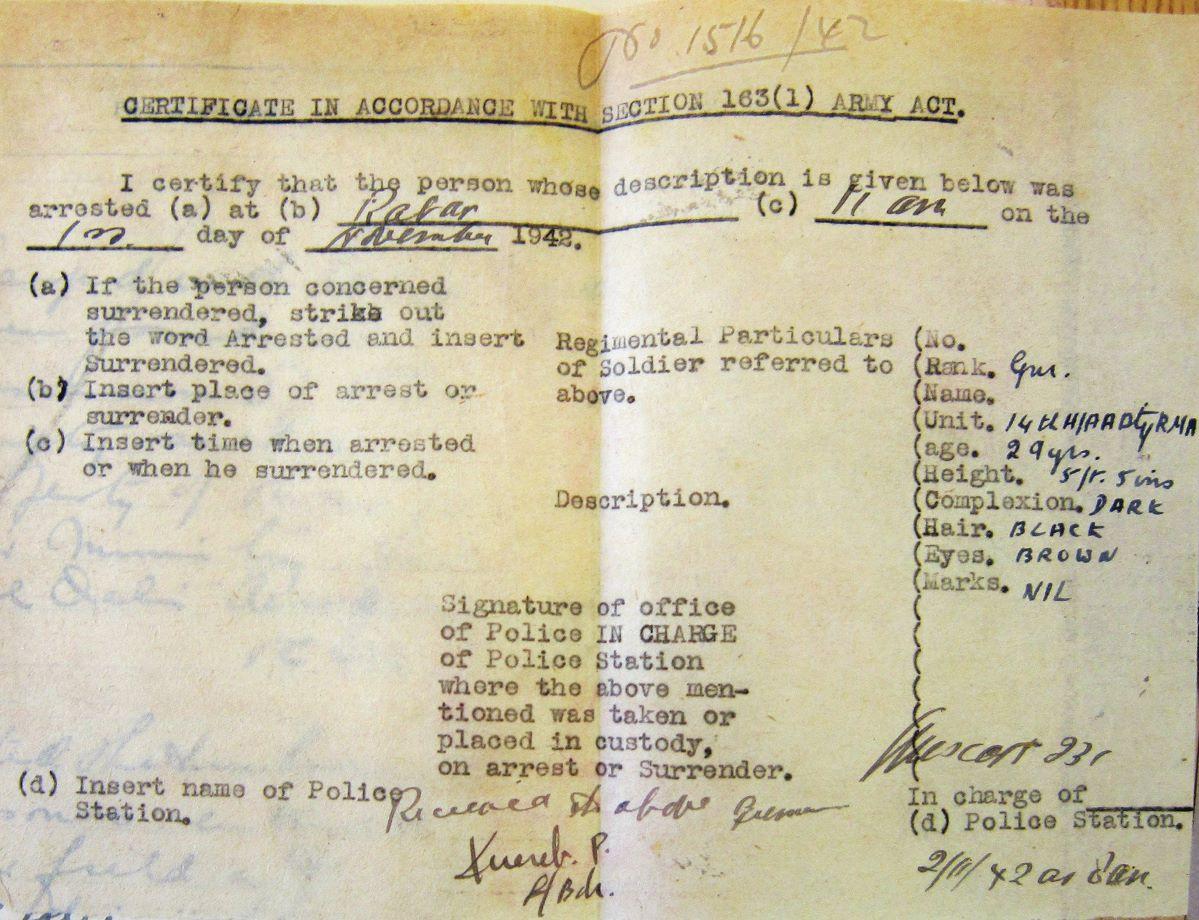 On February 21, 1942, two military policemen requested the assistance of the Gżira Police to arrest a deserter from the 2nd Battalion, Royal West Kent Regiment, who was living at No 5, Cuschieri Street. The private managed to run away after a scuffle with PC 555 S. Xuereb, R/PC E. Sultana and the military policemen. The two constables were summoned in front of the police commissioner and forfeited two days leave each for allowing the deserter to escape.

That same day, another absentee, this time from the 3rd Battalion, K.O.M.R., was detained by the Sliema Police in the sergeant’s office. However, during an air raid, the private managed to escape. He was recaptured two days later and this time kept in a cell until a military escort came to collect him.

A month later, the Gżira Police had another tough case on their hands. A private who had been reported missing from his battalion was seen in a restaurant at No. 62, Rue d’Argens. “He was approached by PS 605 A. Mallia and ordered to follow him to the Police Station. The soldier attempted to escape and when stopped by the police, he attacked and resisted the police, striking and biting the same and causing an injury on the forehead of PC 467 A. Portelli and kicked R/PC 255 E. Portelli, causing him an injury on his eyebrow.” The serviceman was finally dragged to the police station from where a military escort took him to the Picket House, Valletta.

In May 1942, the Birkirkara Police received information that a suspicious person was seen loitering near a garage at 109, St Julian’s Street, Birkirkara. The garage was being used as a government store for carobs and dry beans. PC 199 A. Cachia and Reserve PC 383 C. Briffa found that the padlock of the garage had been forced open but nothing had been touched from inside the store.

Then, in a derelict rural room in the vicinity, the two constables came face to face with a Maltese gunner who had deserted from his unit and who was also a fugitive from Corradino Prison. Although the two policemen managed to grab hold of the man, he resisted and managed to flee. In the rural room, the constables found the deserter’s personal effects together with some stolen items.

A tragic case occurred on November 15, 1941. Lewis Vella, a 49-year-old from Birkirkara, was in his rural room when he spotted an Englishman walking past in the pouring rain. Vella invited him to take shelter inside the room. The Englishman, who was wearing civilian clothes, walked in and even accepted a cigarette while they chatted together. Then, when Vella looked away, the stranger took out a revolver, shot him and fled.

Bleeding from the chest, Vella walked a quarter of a mile to his home, from where he was taken to Bugeja Hospital in a critical condition. The police searched the area where the shooting occurred but to no avail. Before he died, Vella described the man who shot him as “rather tall and slim, small clipped moustache of a brown colour, hair also brown, wounded and bandaged either in the left or right hand, bareheaded, wearing no scarf”. The man was finally arrested by the police in Valletta. He was a deserter from the 2nd Battalion, Royal West Kent Regiment. During his trial, the soldier was declared insane and committed to a mental institution.

It was not only soldiers who absconded. Some sailors found life on ships or submarines too hazardous and left at the first opportunity. In February 1941, a donkeyman and a greaser were charged with having deserted from RFA Plumleaf. They were both fined £5 and forfeited all their personal effects left on the ship together with all due back pay.

In May 1941, the captain of S/S Svenor complained that six of his crewmembers had left ship while in harbour and never returned, while Carl Knudsen, the master of the MV Amerika, reported that one of his greasers was absent from his ship. The sailor actually returned on board, refused to obey his captain’s orders and disappeared again. He was eventually caught, charged with having been absent from his ship on more than one occasion and to have shown gross insubordination to a superior officer, and sentenced to two months’ imprisonment and 14 days loss of pay. 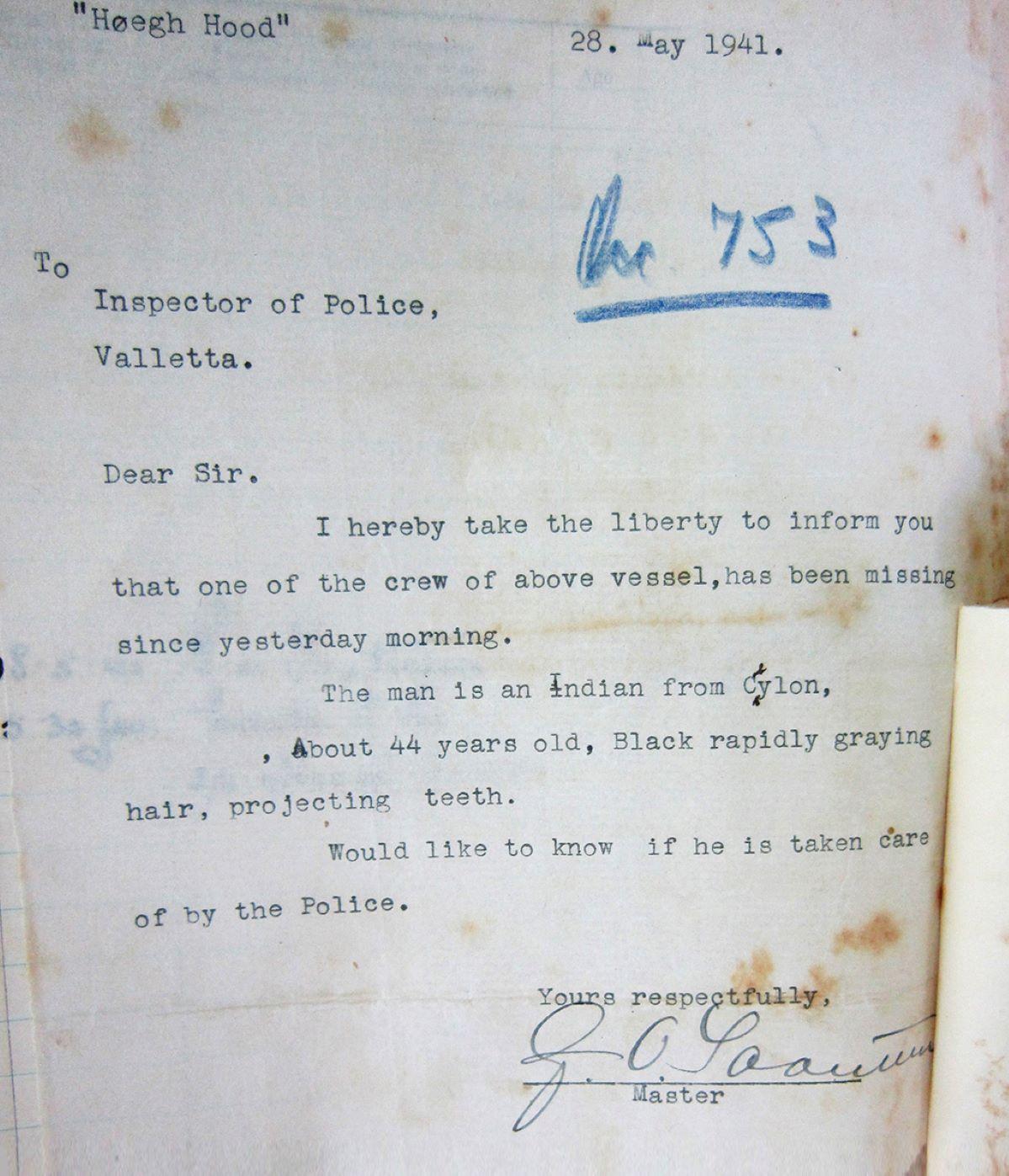 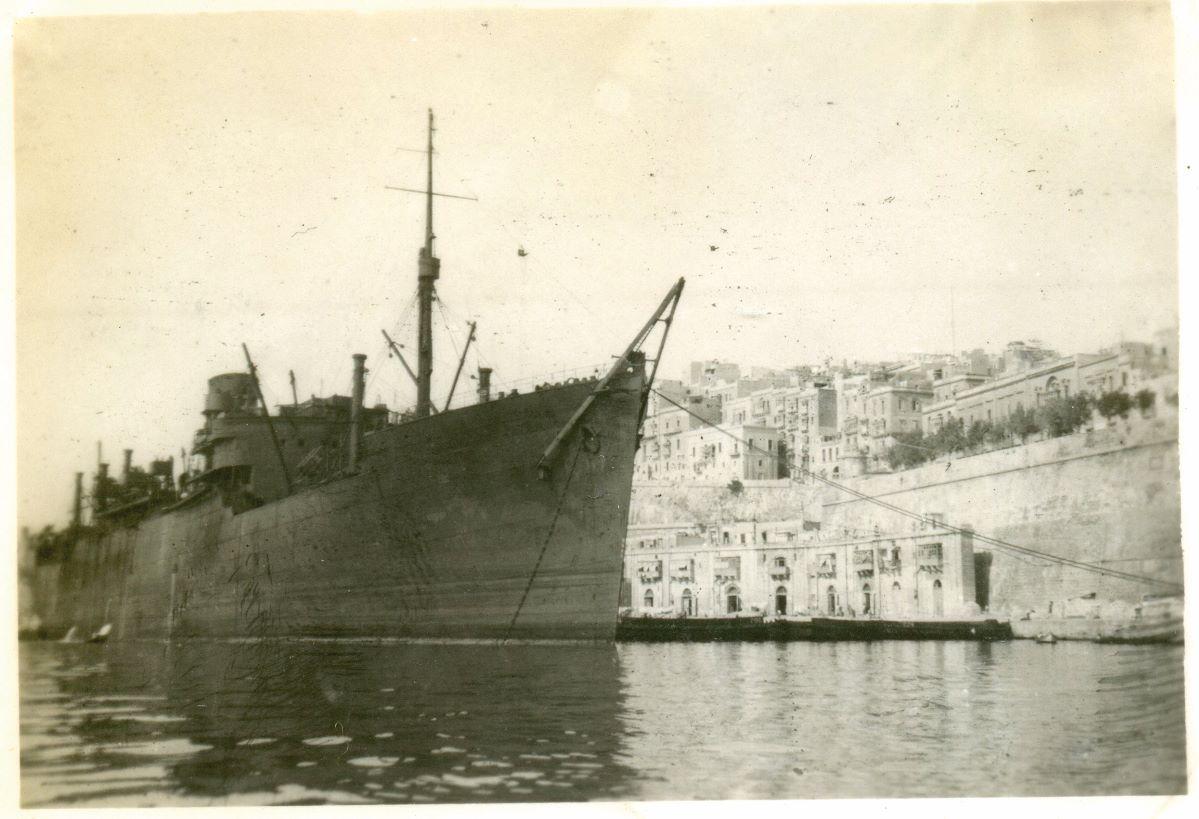 An absentee deckhand from a merchantman briefly appeared on board his ship to collect his wage and then went missing again. Photo: James Payne

During that same month, an Indian from Ceylon disappeared from the Høegh Hood, a Norwegian ship, while an absentee deckhand on SS Talabot made a brief appearance on board to collect his wage and then went missing again.

The author thanks Ruben Vella and the National Archives staff, without whose assistance this article would not have been possible.

This is the third of a series of articles to be published in The Sunday Times of Malta. They are adapted from the book Malta War Occurrences – The Police Logbooks 1940-1942, written by Jeffrey Sammut and to be published soon by BDL Books. For more information visit https://bdlbooks.com/.