Updated 10.16 with Labour statement below -

Former parliamentary secretary Jason Azzopardi is standing by the claim that junior ministers have had their salaries doubled “by stealth” to €60,000, despite a government denial yesterday afternoon.

Dr Azzopardi backed his assertion saying that evidence of this rise stemmed from the declaration of assets filed by various junior ministers following Labour’s election to government in March 2013.

According to the publicly-available documents last year, MP Silvio Parnis declared an income of €60,000 from his position as parliamentary secretary. However, it is not clear if this amount comprised the MPs’ honorarium.

Similarly, Dr Azzopardi cited the declarations filed over the years by past Labour junior ministers like Roderick Galdes and Ian Borg in 2014 and Jose Herrera in 2013, whose income as junior minister in Cabinet hovered above the €55,000 mark.

Moreover, there were instances like that of parliamentary secretary Chris Agius whose income increased from €48,000 in 2014 when he was already junior minister to over €60,000 last year. However, from the declaration of assets alone, it is unclear to establish the source of this increase.

The controversy erupted on Friday when the Opposition MP quoted a report uploaded by The Shift News which said that the income of Parliamentary Secretary Silvio Schembri had doubled between 2017 and 2018.

As a former parliamentary secretary, I know it as a fact

Dr Azzopardi highlighted the matter in the wake of the barrage of criticism which the Labour Party had levelled at the Nationalist government in 2008 when members of Cabinet had been given a €500 weekly increase. At the time, the Opposition MP was parliamentary secretary. In this context, Dr Azzopardi described Labour’s decision to double the wage of parliamentary secretaries “by stealth” as shameful.

However, in a short statement, the government on Saturday pointed out that Mr Schembri’s income has only doubled due to the fact that he was promoted to Cabinet in the second half of 2017 following the general election. Therefore, Mr Schembri’s income for 2018 was double that for the previous year. Moreover, the government insisted there had been no changes in the salaries of junior ministers since 2013.

Asked by The Sunday Times of Malta if he would be sticking to his guns Dr Azzopardi replied in the affirmative.

Dr Azzopardi also described the government’s reply that there had been no changes since 2013 as “quite vague”.

“Was it referring to March 2013, or the turn of the year when the PN was still in government? If the increase had been in place from day one of the Labour administration there would be no change,” he said.

In December 2013, just months into his premiership, Joseph Muscat had been handed a report which had recommended the doubling of politicians’ salaries and the abolition of their allowances. The report had been compiled by a commission comprising the Ombudsman, the Chief Electoral Commissioner and the Auditor General.

However, Dr Muscat had ruled out any increases at least during the first legislature. Nonetheless, one of the first decisions taken by the Labour government was to remove a legal impediment, which prevented government backbenchers from chairing state entities like the Occupational Health and Safety Authority.

Consequently, the government came under heavy criticism that it had taken a step to supplement the income of its own MPs. In doing so, the government had bought the backbenchers’ silence as any signs of dissent could jeopardise their additional stream of revenue, critics had said.

In a reaction, the Labour Party said Dr Azzopardi was persisting a lie, but was also contradicting himself.

After the change of government in 2013, the Labour government removed the pay rise which the former members of cabinet had given themselves, the PL said. 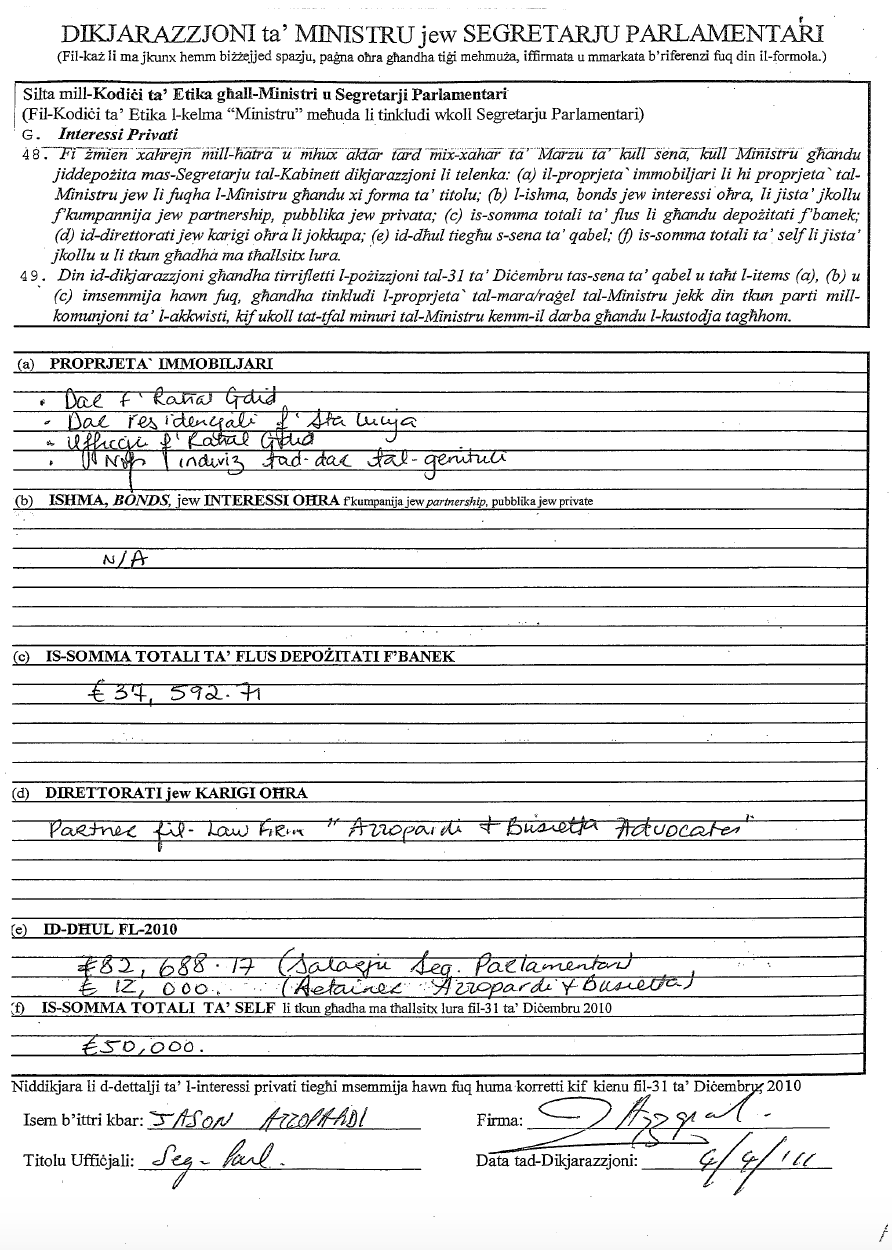