Women and girls with disabilities are doubly vulnerable in conflict or crisis situations, aid groups warned at a recent global conference on disability in London.

An estimated one billion people around the world have a disability according to Britain’s Department for International Development, which hosted the event, and 800 million of them live in developing countries.

“Being a woman or girl with a disability is a double vulnerability. They are invisible,” Yves Daccord, chief of the International Committee of the Red Cross (ICRC), said on the sidelines of the event.

“It excludes you from society and it’s not a choice. And your community or even your family can just throw you out.”

Malta’s National Commission for the Promotion of Equality recognises that women and girls can experience additional barriers to the enjoyment of their human rights due to discrimination on multiple and intersectional grounds, including disability.

“Therefore, women and girls with disabilities are doubly vulnerable not only in conflict situations but throughout their lifecycle, be it the family or in society,” said Commissioner Renee Laiviera.

The policy of inclusion aims to address the negative effects faced by children with disability but, more so, address the intersectional discrimation faced by girls

Unicef estimates that disabled children are up to four times more likely to experience violence and girls are most at risk.

Ms Laviera added that apart from sexual violence, women are at risk of other breaches of their human rights in situations of conflict or terrorism, such as displacement, loss of home and property, loss or involuntary disappearance of close relatives, poverty and family separation and disintegration.

ICRC’s Daccord said girls who had been disfigured by bombs or landmines, or were born with a disability, were often considered a burden on their families and communities.

“So when girls can’t fit that role, the price they have to pay is dramatic. That’s why disability is so dramatic for everybody, but even more so for girls.” 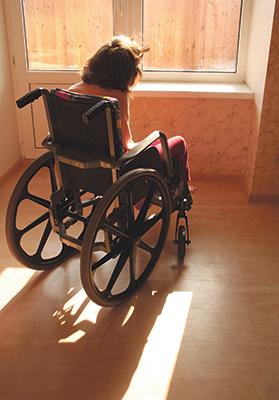 According to Unicef, more than half the estimated 93 million disabled children in the world are out of school.

“If you layer in the cultural dimension, where there is a focus on family honour, you do come across terrible stories of adolescents who do get pregnant because of sexual violence, who will be murdered, or in most cases silenced,” Jones added.

The UN children’s agency, Unicef, also said that more than half the estimated 93 million disabled children in the world were out of school, knocking up to five per cent off national incomes due to their lost potential.

Malta has for some years adopted a policy of inclusion in education aiming to create, from an early age, environments responsive to the different developmental capacities, needs and potential of all students from kindergarten (including childcare centres and private kindergartens) to tertiary and adult education.

“The policy of inclusion aims to address the negative effects faced by children with disability but, more so, address the intersectional discrimination suffered by girls because they are girls and they have a disability,” continued Ms Laiviera.

“Moreover, in the Budget Speech for 2015, the government, recognising the potential of all citizens in society, committed to enforce the two per cent quota, which denotes that for employers hiring more than 20 employees, at least two per cent of the workforce must be persons with a disability. This commitment leads to increasing opportunities to enjoy economic independence for all, particularly women with disability, and continuing to enhance their participation in the labour market for the benefit of society.”