Just two months ago, Malta celebrated the pope’s arrival with great fervour and enthusiasm. Our authorities also organised a beautiful well-deserved welcome for this amazing statesman and religious leader.

The apostolic journey of Pope Francis to Malta focused on the plight of migrants, as the island has always – from the time of St Paul’s shipwreck – been at the frontline in dealing with large numbers of sea arrivals from Africa.

He called on us Maltese to open our hearts and look at all human beings as the sons and daughters of God. He appealed to our authorities to save the migrants from drowning in the Mediterranean, an appeal he has made to all European member states. He urged us to give them their rightful due respect, dignity and hospitality.

Pope Francis has repeatedly described the Mediterranean as “a great cemetery”. This situation is made all the more tragic with an increasing number of African asylum seekers being children – one-third of all migrant flows from Africa are unaccompanied asylum-seeking youngsters, fleeing wars, conflict, oppression, persecution and extreme poverty.

As affirmed by the pope, the United Nations and the EU, Libya is not a safe place to return people rescued at sea because they easily become the prey of traffickers “who transform them into slaves, selling the women, torturing the men”.

It is well known that refugees’ human rights and freedoms are repeatedly violated in Libya where they are subjected to confinement, extortion, torture, rape, slavery and arbitrary killings.

Pushbacks to Libya not only violate the law of the sea – which unequivocally states that people rescued from distress at sea have to be taken to a place of safety – but the very human rights of all human beings.

During his visit to our islands, the pope reiterated his pain at seeing so many migrants and refugees today being sent back to North Africa to a life of suffering.

As we mark World Refugee Day today, his words still crisply resonate but, now that the fanfare has subsided, we have returned to business as usual.

It is paradoxical that while, on paper, the Maltese government upholds the law of the sea, subscribes to safeguarding human rights and children’s rights, it sticks to its policy to abandon and push back refugees to Libya, where their lives are endangered. 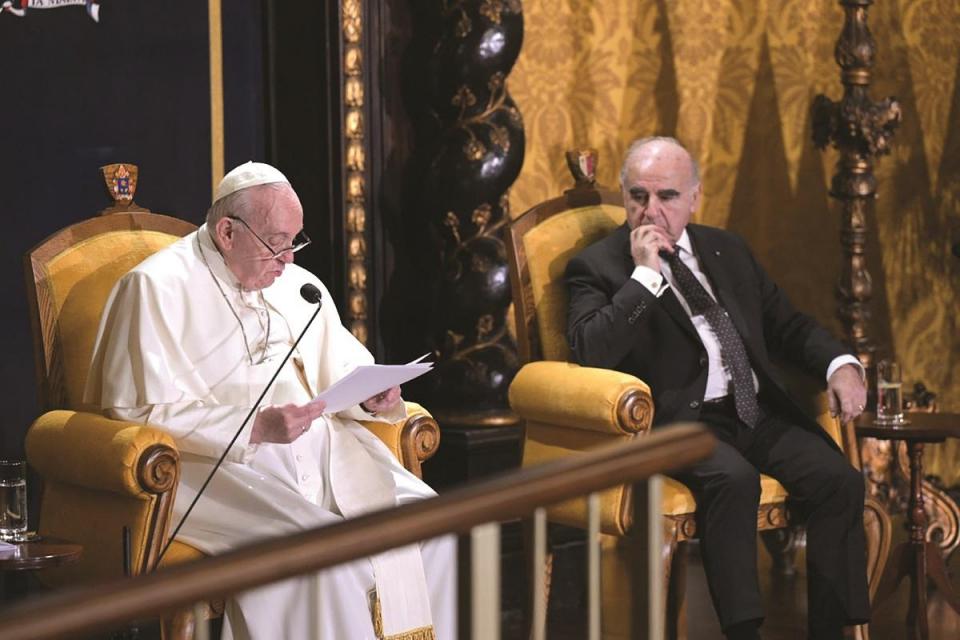 During his visit to Malta, Pope Francis asked us to treat those who land on our shores with ‘unusual kindness’. Photo: Curia

It is also humorous how, each day, Transport Malta’s campaigns exhort us to adhere to the letter of the law and be caring and thoughtful at sea so as not to endanger people’s lives… it seems this care stops beyond our beaches.

As a campaigner for human rights and in my position as Eurochild president, I want to ensure the pope’s appeal and message does not go astray.

And one area where we urgently have to tap into our compassion and sense of justice is the El Hiblu 3 case, where three African teenagers who helped save 105 fellow migrants from being pushed back to Libya are being prosecuted as though they are criminals.

The case dates back to March 2019, when Kader, 15, Amara, 16, and Abdalla, 19, were among 108 refugees who climbed from a sinking dinghy onto the merchant vessel El Hiblu.

The captain informed the shipwrecked people he would take them to Europe but, in the middle of the night, they suddenly realised he was in fact steering the vessel south towards Libya.

They raised the alarm and some of them were even prepared to jump overboard, and risk drowning, than face the horrors awaiting them. The three young men – two of whom are still children – acted as translators and mediators and, consequently, the tanker changed course for Europe and Malta.

The El Hiblu 3, as they have become known, acted peacefully on behalf of themselves and their fellow human beings to prevent violence, suffering and imminent danger. Instead, these youngsters are facing years in prison and live under strict bail conditions.

All those who adhere to the Universal Declaration of Human Rights must agree with the El Hiblu Freedom Commission that resisting illegal pushbacks to Libya is not a crime.

It is in this context that I respectfully request that the trial of the three young men be dismissed and that the El Hiblu 3 be freed immediately.

Let us wholeheartedly heed the call made by Pope Francis to treat those who land on our shores with “unusual kindness” and show that we really are a meaningful nation and true champions of human rights.

President Emeritus Marie-Louise Coleiro Preca chairs the Malta Foundation for the Well-being of Society and is Eurochild president.